After the yellow “Demon” retreats, Ouma spots another part of the world (other than the mountains) that hasn’t changed since his time: a castle. When he calls out to be given an audience and gets no reply, he is confused. When he gets a look at Yukina’s outrageous-for-his-time outfit, he scolds her.

When Yukina starts talking to a “box”, a lady appears inside of it, and the castle’s floodlights come one, he believes it all a matter of demon trickery. This is a man stubbornly clinging to his time, but this week he finally relents, even if it means becoming, as he sees it, ‘useless’.

What Ouma does not and will not set aside is his honor, which means even though he considers Yukina his hostage, he shan’t lay a hand on her, nor any woman or child. That policy is tested when he’s quickly re-captured by the UN, escapes again, and comes afoul of Sophie. She surprises him by taking him down and putting him in a hold, but she releases him when he gropes her. While not every female soldier in this day and age would have reacted as Sophie had, in this case he was lucky.

What’s nice about Japan is that many man-made things haven’t changed much in four centuries; not just the castle: Yukina’s uncle Yakushi Osho is a monk, and wears the same basic threads as his forbears of yore. He manages to finally calm Ouma in a great little scene in which the two men sit together and speak plainly.

Even so, when Ouma is in transit flanked by UN guards, he runs into Yukina’s precocious little sister Koharu, who came to the lab to see her sister and wandered off on her own. Koharu gets in trouble with the guards holding Ouma, who knocks them out for threatening to raise a hand to a child, something he cannot abide in any century. 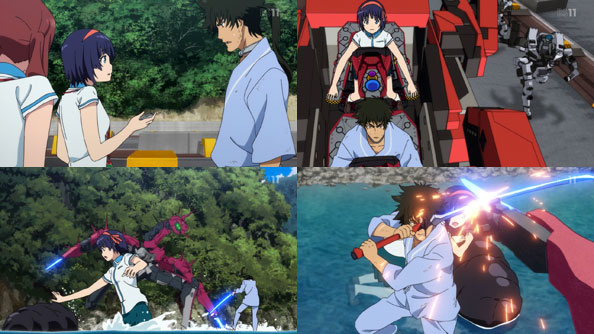 Now, it’s a bit implausible and convenient for Koharu to have such free rein in a high-security facility, and that of all the halls of the vast complex, she crosses paths with Ouma. Then again, Ouma seems to be a bit of a man of destiny, while Koharu is a known “adventurer”, as some little kids tend to be. She’s also a bit of a samurai otaku, and cheerfully greets him with the traditional –de gozaru vernacular.

She also follows him out into the woods, but it isn’t long before a demon “Cactus” gives them the jump. Koharu is captured, and Ouma must run back to HQ for help—and his “steed.” He enlists Yukina’s aid, promises seppukku if it turns out he’s wrong, and the steed flies to his location to scoop the two of them up.

A thrilling ride ensues, with the steed flying over the massive dam and through the river’s canyon, with Yukina using her phone’s GPS to locate Koharu. They find her just moments before the Cactus makes off with her (covered in some kind of cocoon) and with some UN assistance, Ouma is able to slay the demon.

For his heroics, he is pardoned for his latest escape, but more than that, this whole ordeal ends up leading to Ouma’s final realization that much time has indeed passed since he went to sleep in that cube. He knows this because the landscape tells him: a great rock cleaved in two by his own (relic’s) hand so long ago, now covered in plants.

Meeting again with Yukina’s uncle, with no lord to serve Ouma knows not his purpose nor why he is alive anymore. But I will rest assured that purpose will be revealed to him in due time, if it hasn’t already. I presume he was awakened so he could join Yukina (distant relation to his former lady?) in fighting the new scourge of demons poised to wreak havoc across the globe.

That he was able to rescue Koharu can be a purpose in and of itself, though it’s true she only ended up in danger because of him. Still, before long everyone may be in danger, at which point his new purpose—to protect those weaker than he—will be clear.