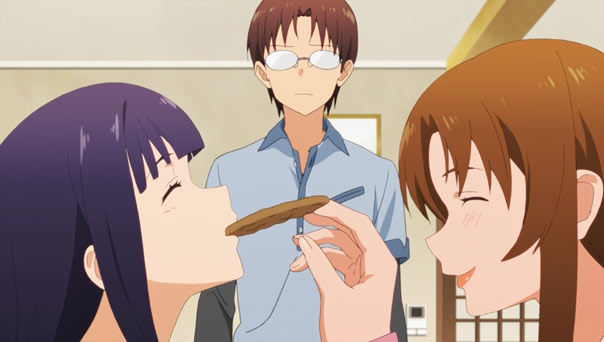 A lot of the interpersonal conflicts that arise in Working!! come down to people interpreting each others actions, words, or lack of words incorrectly; making the wrong assumptions. So it’s no surprise that the core conflict of Yamada Aoi—that she’s run away from home—comes down to such misinterpretations. After all, she’s one of the strangest communicators out there, having a running third-person commentary of her life as she lives it.

Aoi is also bright and friendly and warm and cute—when she’s not being impetuous, cocky, or a huge hassle to others. Her mom is not any of those things. She comes off to many like a robot, and Kirio and Aoi were even furnished with “mom manuals” in order to interpret her subtle facial expressions, since she speaks so little. Aoi is in conflict with her mom because she never RTFM.

As such, Aoi interpreted her mother foisting huge books on her to mean she was coldly forcing her to cram, even though her mother inside was simply worried about Aoi’s future. And Kirio eating her special natto (which he didn’t think was so great) is the last straw (or natto strand). Aoi tries to form a new family in Wagnaria, then Takanashi’s house, but her proper place is with her family; it’s just a matter of being convinced.

The issue is brought to the forefront, and resolved, by two side characters. Aoi’s mom happens to be Takanashi’s eldest sister’s masochistic ex-husband, and Otoo’s often-lost wife Haruna convinces Aoi to go back home based on the principle of “ships passing in the night”, or family members and friends who may have wildly different ways of looking at and interacting with the world can still bump into each other on occasion, which is something to be celebrated.

Aoi thus learns the conciliatory, re-connecting value of a hug from her mother (who tracked her down, ninja-style), and returns home, even though she still considers Souma a better big brother than Kirio. But while this means Aoi will no longer be living either at the restaurant or Takanashi’s, I’m sure she’ll still be “working” there on occasion; as long as it doesn’t interfere with her studies.

While I like the fact that while trying to focus on work instead of obsessing over the meaning of Inami’s words last week has Souta cleaning the house so intensely that everything sparkles for the duration of the episode, this episode still felt a bit stretched-out and listless, tackling an issue that we’re no strangers to, but very much want to see more progress on rather than additional deliberation.

That issue is Inami x Souta. Thirty-one episodes have aired without resolving this romance, and I’ll admit, I’m just about as exhausted by the will-they-won’t-they as Izumi is with activities like standing, talking, and being outside. Worse, nothing really new is added to the equation this week. Izumi simply gets the wrong idea and sets Inami and Souta on a blind date. 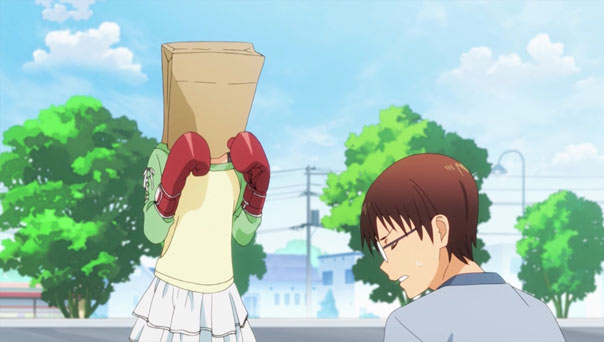 Mind you, the sparkly house, image of Inami in a paper bag and boxing gloves, and then burning up are all fun, but they don’t change the fact that 90% of what they should be verbally expressing to each other remains stubbornly in their respective heads, running around in circles. It dawns on Souta that these events prove that Inami likes him, and Inami herself believes she said enough to give him that impression, but nothing comes of it; he simply gets bashful and scurries off. But hey, at least she didn’t punch him! 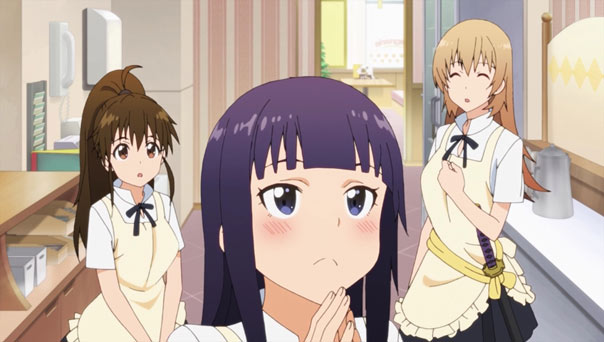 Worse still, an already stretched-out A-story was padded rather clunkily by a seriously lacking B-story in which Yamada runs around with Natto, spills it on her, declares she’s “Done With Natto”, and is then convinced to go back to it after she learns most everyone’s favorite foods are soy-based. We get it; Yamada’s a big ol’ weirdo. Yet the episode insisted on banging a pot behind our heads shouting “OMG ISN’T YAMADA SO WEIRD!” I would have honestly preferred a B-story centered on literally anyone else. This was a rare miss for Working!!.