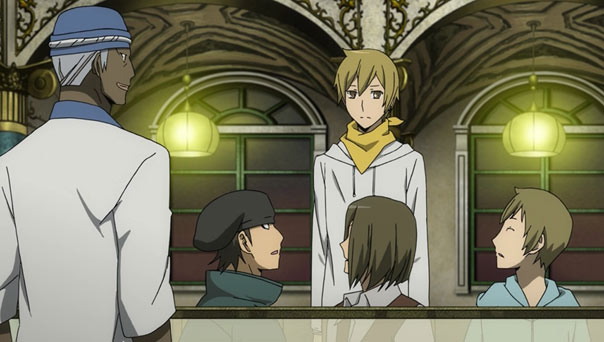 After a week off, a new Durarara!! arc begins with a scattered (even for this show) and at times yawn-worthy table-setting outing in which Erika lures Anri into trying out cosplaying, and the remaining members of Kodata’s crew are having a meal at Russia Sushi when they’re confronted by Masaomi, who wants them to leave the Dollars and join his Yellow Scarves. Masaomi wants to “destroy” the Dollars, who have been corrupted by Blue Square in order to “save someone” who we know to be Mikado.

Meanwhile Aoba’s puppet-master Aoba is confronted by his aniki Izumii Ran, fresh from working with Izaya and hungry for revenge against Kodata & Co. A lot of dirty laundry is aired, including Aoba setting fire to Ran’s room when they were younger, and Ran agreeing to take over Blue Square from Aoba once it got too big and unruly.

As for Kyohei, he says he’ll consider Masaomi’s offer and discuss it with his crew (of which Erika is absent), later pondering the recent change in Mikado’s personality and his involvement in the internal purging of the Dollars. Then he’s suddenly hit by a car; most likely Izumii Ran’s opening salvo in his quest for revenge. Just like that, a major player in Ikebukuro is taken out, leaving all who relied on his strength and honor a lot more vulnerable, not to mention torpedoing Masaomi’s plans. 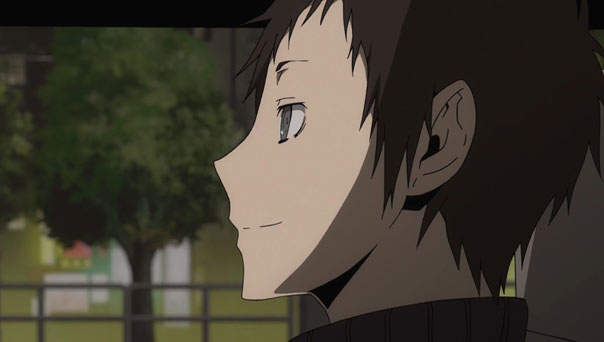 As Aoba rides in a van with Mikado and other Blue Square sharks, we see Mikado continue to portray the proverbial kingpin, saying he himself probably shouldn’t go visit Kyohei, but suggesting Aoba do so, but not to bring the wrong kind of flowers. He even seems a little morbidly relieved that Kyohei is off the board for the forseeable future, even if he wasn’t aware Masaomi was trying to recruit him.

If nothing else, Mikado is happy to keep working in his current role with his current support group, diving down a hole that may not have a pleasant bottom. Masaomi wants to save his gentle-hearted friend, but that Mikado may no longer be around, and may not be coming back. 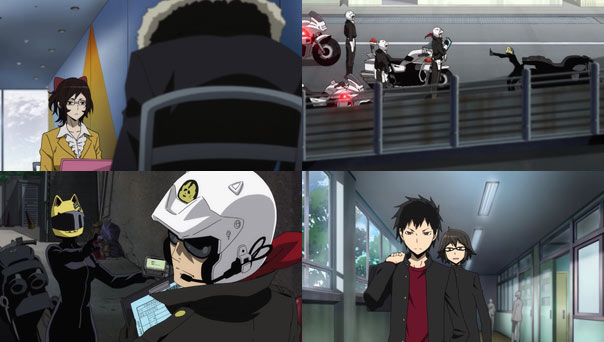 After opening with an “insurance agent” interviewing a guy who apparently sold Orihara Izaya his name, Drr!! cuts to the familiar cat-and-mouse of Celty vs. Kinnosuke, before she returns home, exhausted and lamenting her police-target status before putting things into perspective: Shinra is in bed convalescing, having been beated half to death by Adabashi (Of course, Celty is also missing her head, so I think she wins the whole despair sweepstakes).

While changing Shinra’s bandages, Celty discovers an old scar, which Shinra proceeds to talk about despite the fact he has some mixed feelings about it. He received it twelve years ago in middle school. That’s incidentally where and when he first met Orihara Izaya, and learned of his love of observing humans. He got him to join a two-member “biology club”, even though they wouldn’t be doing much biology.

It seems they mostly hung out in a lab, collecting money for sports betting. One of their classmates, Nakura, got in too deep and demanded a refund with a pocket knife, but Shinra came between them, getting stabbed in the process. After stopping the bleeding with duct tape (truly a mob doctor in the making), Orihara asks Shinra to tell the police he, not Nakura, stabbed him. In exchange, he’ll make sure Nakura regrets it the rest of his days.

It would certainly seem like Nakura regrets a great many things, considering Orihara made him both “Lizard” of Amphisbaena and “Mr. Momui” of Heaven’s Slave, two apparently fictional leaders of the two organizations, fictions whose respective Number Twos (Mimizu and Shijima perpetuate to maintain order. And if there’s ever a gang war between, say, Awakasu and either or both of those organizations, Nakura, not Izaya, will take the heat. 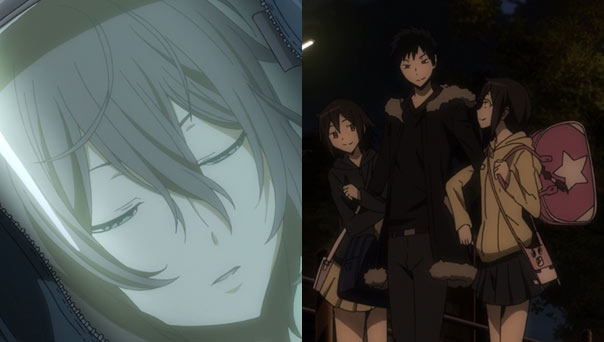 It was the first of many acts by Izaya that could be construed, depending on your perspective, as selfless, thoughtful, or loving acts to protect his friends and family, or more selfish poking and prodding of humanity. Ostensibly, he tortures Nakura to this day for hurting Shinra, and hired Celty to protect his sister, but in both cases those actions served him just as much as the beneficiaries.

And as Izaya continues to carry Celty’s head around, it would appear his own stabbing by an associate of Yodogiri Jinnai hasn’t discouraged him from continuing his usual habits.

This marks the second-straight episode of anime, after OverLord – 04, in which a group or groups are ultra-confident to the point of arrogance they have the upper hand over a foe, when in fact, they’re hanging by their pinkie off the edge of a cliff. The one to show them reality in OverLord was Momonga; here’s it’s everyone’s favorite human observer / information broker, Orihara Izaya. 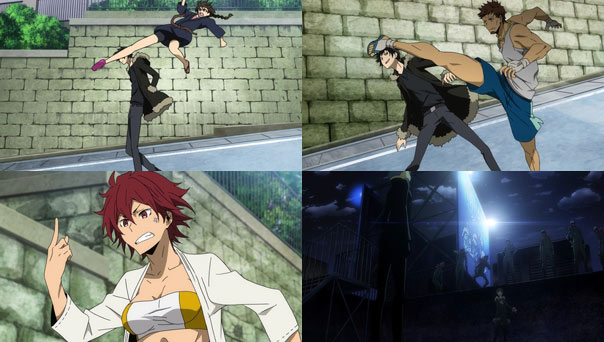 The confident parties include Heaven’s Gate, a group we were introduced to when Akabayashi broke up a drug racket in a club bathroom, and Amphisbaena, a rival group running underground casinos using cashless IC chips. Awakusu asks Izaya in investigate the latter, who knows he’s investigating them, and Heaven’t Slave knows too and wants to find a way to make it to their advantage.

Izaya by now has assembled his team of muscle made up of Zombie Dragons, martial-arts ace Sharaku Mikage, a girl who is a Saika vessel, and a due with a big hammer, and more. Yet, throughout the episode we cut from him interacting with both his team members, sisters, and Celty (to transport a laptop displaying GPS tracking data), to a man in his clothes with a burlap bag over his head being very lightly tortured by a very comely, well-dressed Amphisbaena member.

Heaven’s Slave crashes Amphisbaena’s party, which gets both groups in the same place, and then it’s time to unmask the captive. Both leaders get phone calls from someone with a disguised voice who momentarily gets them to believe they may have accidentally captured one of their own bosses, only for the captive to take his bag off and reveal it was Izaya all along, utterly unimpressed with Amphisbaena’s interrogation techniques. 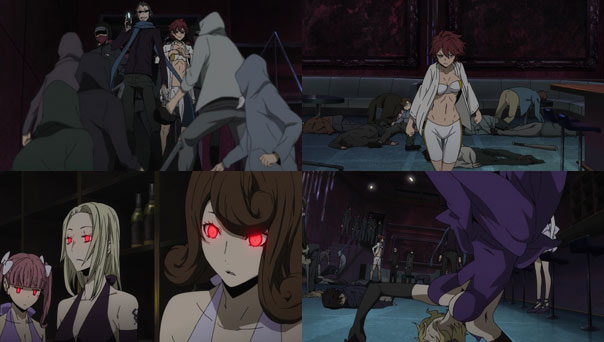 Then Izaya’s friends storm the place and lay absolute waste. Again, like in OverLord, there’s no contest between those who thought they had everything figured out and those who actually do. Heaven’s Slave and Amphisbaena are humiliated, and their inexperience with how things are done in Ikebukuro—with supernatural beings and elite specialists in various fields—and end up looking amateurish. The lesson is: don’t mess with Awakusu…or at least don’t mess with them when Izaya is working for/with them.

From Izaya’s victory we cut to another conversation with Shiki in the back seat of his car. Shiki is pleased both the rival gangs were dealt with, but warns Izaya they know he went above and beyond, and not to overstep his bounds with his new over-leveled mini-gang, and to call Akabayashi as soon as it’s convenient.

Izaya acts the submissive part, as someone who receives “bliss” for being “used to the max” by Awakusu Group as an information broker. It’s not necessarily a dishonest statement, as his work does allow him to observe very interesting humans doing very interesting things. But I can’t believe he assembled that team just for that one job. There’s much more to observe and do.