As the Central Elite Ten trains hard for the upcoming Team Shokugeki and an exhausted Erina sleeps soundly after standing up to her father for the first time, Souma, Megumi and Takumi finally learn what exactly happened between Jouichirou, Gin, and Azami back in the day when they were all Polar Star members at Totsuki.

As Souma hears from his pops and the other two hear from Gin, the three were inseparable friends, but Jouichirou was so far ahead of Gin and Azami in sheer culinary talent and innovation it wasn’t even funny. Gin, one of Totsuki’s most accomplished graduates, has a 20-101 record against Jouichirou. I doubt the Azami of the time would have fared any better.

Meanwhile, Jouichirou was a lot like Souma in not taking anything too seriously, and occasionally making weird gross dishes for lil’ Shiomi Jun to taste. We later learn the stark difference between why Jouichirou and Souma engage in such a practice.

(I’ll also note that the fact the three amigos are voiced by extremely talented veterans in the present works against them in the flashback; none of them sound remotely credible as middle/high schoolers.)

In the lead-up to Jouichirou’s entry into the predigious BLUE competition for up-and-coming chefs, he is challenged to a Team Shokugeki against one of Totsuki’s old money family heirs who wasn’t good enough to get into the Elite Ten. Jouichirou decides he’ll go up not only against this loser, but 49 of his friends in a 50-on-1 marathon.

You’d think Jouichirou would be at a huge disadvantage, but no number of inferior chefs can make up for a once-in-a-century talent like him, so it’s no contest. Gin is worried about the chef Jouichirou had to become in order to win such a contest, but Azami is delighted, as Jouichirou is nicknamed “The Demon” and is no longer seriously challenged by anyone at school. 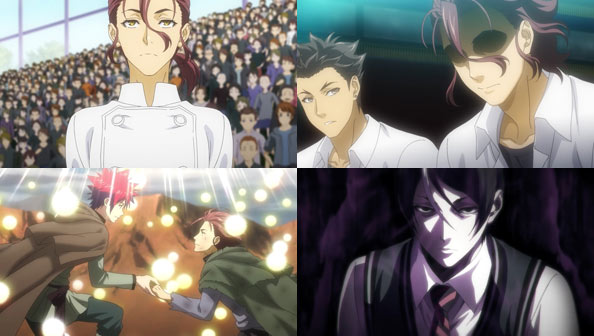 Jouichirou continues to crush outside competitions, but as BLUE approaches, he slowly begins to shut down, no longer knowing what he’s doing or why. He ends up flaking out on BLUE, and Senzaemon, who had predicted that a talent as huge as Jouichirou would eventually turn in on itself.

Jouichirou, Gin, and Azami were at the top of the Golden Age of Polar Star, trudging through a great storm in the desert, seeking out new flavors and ways of doing things. But Gin and Azami let him get too far ahead, and he lost himself. Senzaemon suggests Jouichirou leave Japan—and leave cooking—for a time to try to restore what so much success had caused him to lose.

Years later Gin gets a call; Jouichirou has been back in Japan for a while, has a son and a diner. Gin is just happy he’s cooking again. But Azami isn’t as forgiving. He idolized Jouichirou, and seeing him brought so low was traumatizing. He isn’t just revolutionizing Totsuki and global cuisine to stick it to Jouichirou, but to make sure Jouichirou’s sad scenario is never repeated.

While admirable on some levels, it’s also a choice that will ultimately lead to stagnation. Jouichirou had the talent to go as far as he did, but lacked the tools to deal with the inevitable trials that befell him. His son is the opposite; perhaps far less talented, but a lot stronger when it comes to accepting his weaknesses, staring failure right in the nose and drawing strength from every setback.

It’s why Souma never stops battling his pops, even with an 0-490 record against him. And it’s why I believe Azami’s team will lose. After all, it won’t just be Souma out there alone.