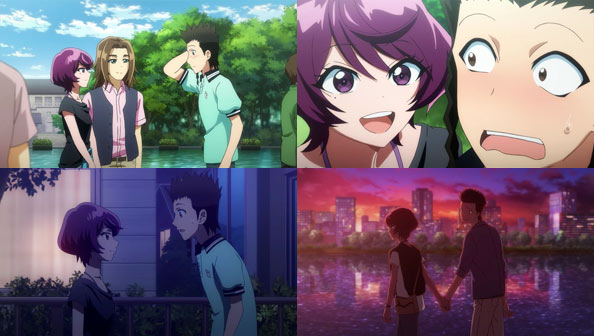 We go from a leisurely Tanabata recap to an episode that really piles on the plot at breakneck speed: Ryougo’s exorcist friend Fushihara introduces him to another fellow exorcist, Haruka, and they start dating; but then Fushihara becomes a Kegare Corruption Rokuro and Benio aren’t able to deal with, but Seigen is.

WHEW! That’s a lot. But I did appreciate the “Lower Decks” style of this episode; focusing on not only minor characters, but far less powerful and distinguished exorcists. It’s just a job, and not always their only job; and there’s life to live in between exorcisms.

Also, Haruka is SUPER-CUTE in the way she takes charge in her rapidly-developing relationship with Ryougo, whose entire life up to that point had been work (exorcism) and family (the dorm).

In what turned out to be a death flag-laden chat with Ryougo at daycare, Fushihara wants Ryougo to understand that in order to be the best exorcist you can be, there has to be something special you want to protect.

With Fushi, it’s the kids crawling all over the two as they have this serious talk (which is a nice touch). For Ryougo, perhaps it’s Haruka, as the two share a hug of grief in the rain in a very nicely composed shot.

Of course, Fushihara didn’t merely die; this show can be cruel that way. Instead, he turned into the same thing Rokuro’s friends did when Benio’s bro turned them into corruptions. That initially freezes Rokuro, and Benio starts the boss fight alone; never a recipe for success.

Indeed, neither seem to have either the strength or the resolve to kill something they know was Ryougo’s best mate a few hours ago. Seigen, assigned to this neck of the woods by Arima specifcially to deal with the sudden scourage of corruptions, ends up taking the ex-Fushihara out.

After that, he opens a gate and tells Rokuro and Benio to SCAT, telling them flat out they don’t have what it takes to be exorcists worth anything to the cause. Pretty harsh, but after they leave, we see he may only be trying to protect them without losing his rep as a hardass. And this certainly won’t be the last case of Kegare corruption.

From there, Ryougo visits the daycare where Fushi used to work, this time with Haruka, and receives the photo his friend always kept with him, to remember what was important and what to protect…a different kind of talisman.

Despite its focus on minor characters and breathless pace, I enjoyed this episode. Ryougo may be a stiff, but I liked Haruka and Fushihara a lot (even though we got way too little time to get to know the latter). I also applaud the choice to offer a glimpse of the world from the perspective of who are neither elite nor chosen ones; just ordinary workin’ exorcists.