This newest version of Working!! just isn’t clicking for me anymore. It’s another episode full of little skits and running gags that doesn’t move beyond the ensemble’s individual quirks, which in most cases, remain muddled, and Hayashida is the most muddled character of them all.

Tha manager seems to have a seedy background, Muranushi has a handful for a mom, while Kamakura waves a katana around…but if you’re going to have a new cast, recycling jokes form the old one isn’t a confidence-inspiring move.

Perhaps the third season of Working!!, in which most arcs were wrapped up for the ensemble, was a good place to stop. A new cast was a bold idea, but it’s a risk that hasn’t really paid off after five episodes. Nearly all goodwill I started with for this new cast has been whittled away, and so unfortunately I don’t think I’ll be reviewing any more.

This fourth episode of WWW.Working!! seems content to continue running three gags firmly into the ground: Hana is really bad at cooking, Shiho is extremely vindictive, and Rui likes Higashia but can’t tell him.

Everyone else is kinda just around, and Higashida exhibits a stubborn cynicism about just about everything that makes him a hard guy to root for. He has a couple choice rejoinders, but it’s not enough. 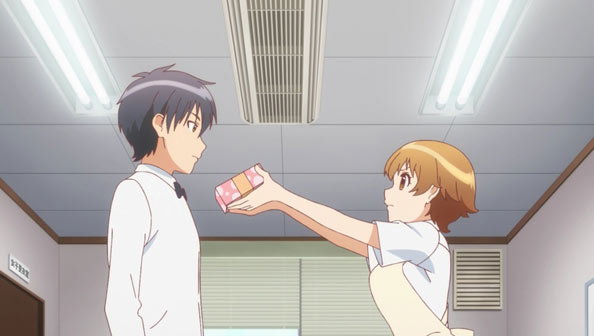 Back when I started this show, I took solace in the fact the characters showed promise, such that the lack of a plot that moved forward quickly might not be a problem. But to stay invested, the characters need to be more than just their quirks (or in Higashida’s case, his attitude). This week they weren’t, and the episode suffered. 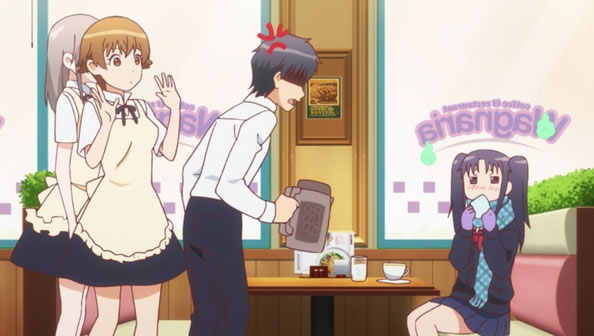 This week the last two characters who appeared in the initial promo art are introduced, starting with Yanagiba Miri, who is not a staff member but a customer Daisuke initially believes is a ghost.

Turns out she’s just a truant from his very class, who got sick earlier in the year and is now worried she won’t make friends. Daisuke’s numerous protests for her to “Go to school!” are good for a chuckle in an otherwise par-for-the-course episode. 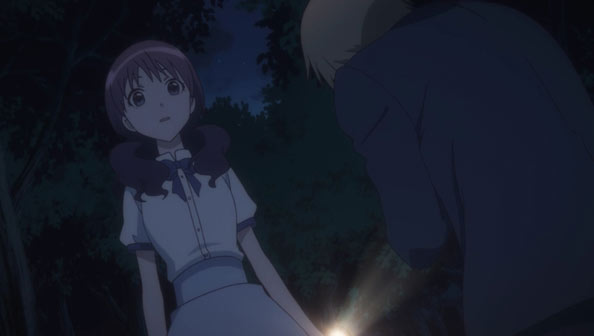 There was initially some potential in the pairings of Daisuke/Hana and Shiho/Yuuta in the forest “test of courage” segment, but aside from learning her parents are just as “weird” as his, not much happens on the former front, while Yuuta’s insistence he and Shiho start over merely as friends only makes her more hungry for pain-and-suffering damages.

Adachi and Maranushi barely register, and the discovery of a raccoon is neither here nor there, though it seems Daisuke will be fostering it at his home, meaning Hana will be by more often than before. 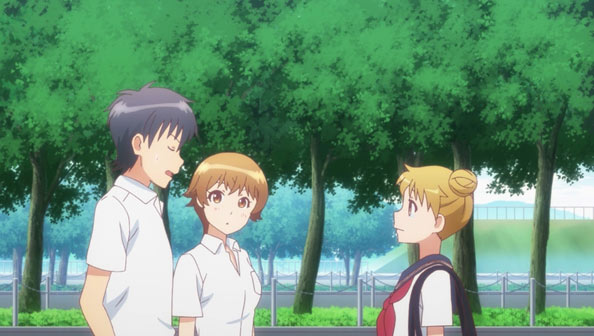 The second character introduced is the adorable Nagata Rui, who like Yanagiba is Daisuke’s classmate but actually attends school. He tries to get Rui to be friends with Yanagiba, but she instead gets fixated on the fact that Daisuke and Hana seem to be close.

It’s clear Rui sees Daisuke as a potential mate, and Hana probably wouldn’t mind if they dated, while he sees neither girl that way. In this regard, he’s the same somewhat oblivious romantic lead as Takanashi, but with one key, merciful difference: he’s not obsessed with small cute things.