The Kirihara brothers escape with the FSA and Masayuki Miki, who wants to go right back to rescue her boy. But Naoya believes it was Miki’s friend Futami Shouko who guided them to meet Miki.

From there we flashback to Miki’s friendship with Shouko back in 2014, when she saw with her own eyes what Miki could do. Shouko compulsively wrote strange symbols in a notebook which literally jump off the page and send Miki into a kind of hallucinatory trance spanning time and space.

But according to Miki of the present, one day she was just…gone. Of course, we know she’s still alive, kinda, in the future, and either the willing or unwilling guinea pig in a lab’s desperate attempt to do…something. Correct the timeline to make 2041 less of an anti-fiction hellscape? Perhaps.

Miki also mentions how when she was 26 she received a package from Shouko, postmarked before she disappeared. In it she found the notebook and some instructions, which Miki followed, spending a single night in a small shrine but emerging the next morning to find three months had passed.

We also flash back to when the Kirihara brothers were first brought to the lab where they’d spend the next few years. While they awaken in what could be described as a gilded cage, Naoto still tries to escape with Naoya, only to be stopped by a barrier that only seems to affect psychics.

Back in the present, one of the FSA members bristles at Kimi’s story about seeing the future and skipping time, continually calling it a bunch of lies. How he can say this after what he’s seen psychics strains credulity a bit; it’s as if he’s only there in the room to complain and dispute Kimi’s testimony.

Meanwhile, while the SWE lost a number of people, HQ is back up and running, and they consider it a net win since it resulted in the awakening of both Reika and Michio and the progression of Yuuya’s powers. Takuya ended up psyching himself into a coma, but he soon recovers.

Kimie gets to work as a guide for Yuuya and his powers, as both she and the SWE boss believe he could be the most powerful of all of them if he’s able to control that power. All we know from the boss is that they’ll “use that  power to achieve their goal”, which I presume means rooting out all psychics who aren’t SWE soldiers. Kimie calls it “protecting the order of the world.”

Back at the old factory, the FSA’s leader Kazama has a proposition for the Kirihara brothers, and Naoto in particular: they’re going to execute an offensive operation on the FSA, and they need Naoto’s power to help. When Naoto refuses, they pull a gun on Naoya and threaten to kill him if Naoto doesn’t obey. Emily, the voice of reason and temperance in the FSA, definitely didn’t want it to come to this, but Kazama and his commandoes are the ones with the guns. 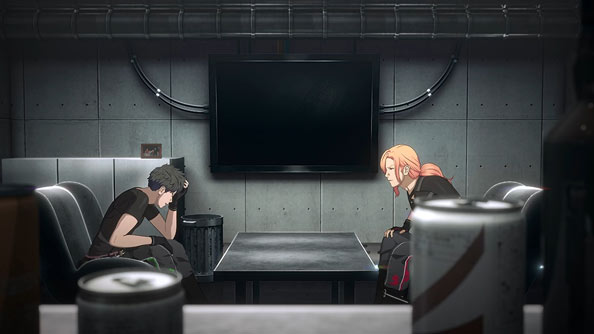 Takuya and Yuuya are chilling in their cold, sterile apartment when visions of the past start flowing through Yuuya, including a scene of their mom and dad being taken by…er…someone.

Between the SWE crew not doing much this week and the FSA immediately and disappointingly showing their true colors, it was overall a pretty listless downer of an episode. My favorite part was the inter-dimensional joyride Shouko sent Miki on with her symbols, but that was all too brief, and that part of the story still carries more questions than answers.

NIGHT HEAD 2041 is all about making connections between people on very different ends of the struggle for freedom of thought and creativity, which is really the struggle for humanity itself. One of those is that the mother of Masayuki—the boy who can take over minds who went full John Wick last week—was high school friends with Futami Shouko, the time traveling girl the Kuroki brothers saw at the Miracle Mick raid. I’m not sure why this connection exists—or why Shouko ties her hair…with her hair—but it’s still intriguing. 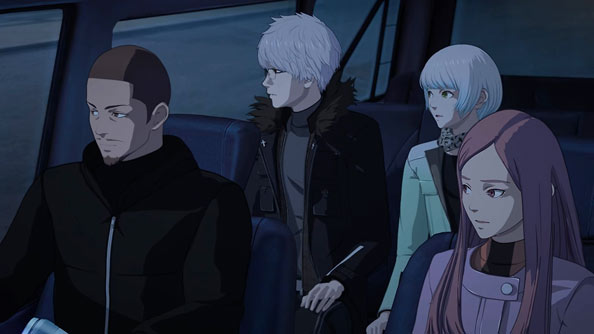 Meanwhile, the Kirihara brothers were rescued by the Free Speech Alliance, who are pretty much the opposite of the SWE, fighting for the very things the SWE are trying to stamp out on orders of a government that does not care about the hypocrisy of employing psychics. Members of the FSA admit that nobody really has very clear memories of the disasters propaganda touts as the reason for this thought crackdown.

In case you thought the governemnt had some good points, we along with the Kiriharas are shown how those who commit thought crime—including young children—are put on display like zoo animals and re-educated. These are bad, but faceless people. We only know who work for them: SWE and the Kuroki brothers.

When Masayuki goes berserk, escapes from custody and goes on a bloody killing spree through the halls of SWE HQ, all because he fears the cops hurt his mom, I’m kinda on Team Nobody. Both Masayuki’s mom and Naoya are a bit too naïve to think the kid can come back to anything resembling a normal life after all the people he killed.

At the same time, only SWE scrubs get killed, and I can’t feel too much sympathy for them, since we know “I was just following orders” is no defense for committing atrocities. That the SWE officers with names who we do know shoot their mind-controlled colleagues without hesitation shows how much this system has fucked with their humanity.

Hell, that the system pushed a little kid to the brink it did means this simply isn’t a system that can last long before it crumbles. But despite working for what can be charitably described as an Enemy of Humanity in the SWE, Yuuya still leaps out and saves Masayuki from Takuya’s psychokinesis , while Reika’s own power awakens just in time to save Yuuya from a giant deadly falling corporate sculpture.

This is a great symbol for the system: overly burdened with zero tolerance laws and brutal punishment; hanging by a thin, fraying cable. The Free Speech Alliance doesn’t actually do anything yet, and it’s not exactly clear what they will do. But between them and the rampant “law-breaking” going on even in normal high school club rooms, that cable is going to snap someday.