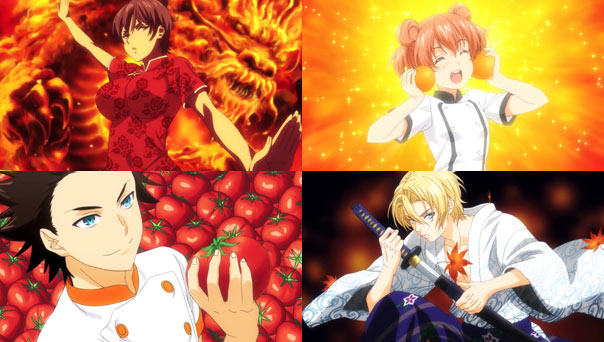 The group B preliminaries really heat up this week, with most of the best candidates being saved for last. The episode also benefits from involving characters I personally care more about, like Yuki, the Super Aldini brothers, Alice, and of course Megumi. We start with the less well-known but still rootable Hojo Miyoko, who earns an 87 with her sweet-and-sour-esque curry fried rice, followed by a delectable duck curry that only scores one point lower, a surprise for someone I didn’t think would be in the running.

The younger Aldini Isami goes first with a very tasty-looking tomato curry calzone that successfully, stylishly fuses Italian and Japanese cuisine, but it’s immediately followed by Takumi’s cheese-stuffed curry linguine with curry gravy that wows the judges even more, earning the second 90 after Hisako last week. Once again, Isami is bested by his slightly older, slightly more talented brother, and simply has to suck it up.

For what it’s worth, Takumi is gracious in victory, and has always said that the two of them are better as a pair than separate. Unfortunately, the Autumn Elections are not something in which they can compete as a pair.

That leaves the final two contestants in Group B, who couldn’t be any more different in their approaches, much like Asako and Nao. Alice literally dazzles and confounds the assembled gourmands with her extremely bizarre-looking, futuristic dish that is a melange of all kinds of varying textures and temperatures. Each judge awards her 19 points out of 20 for a total of 95 – a score Souma will have to beat in Group A to earn a measure respect from a Nakiri. 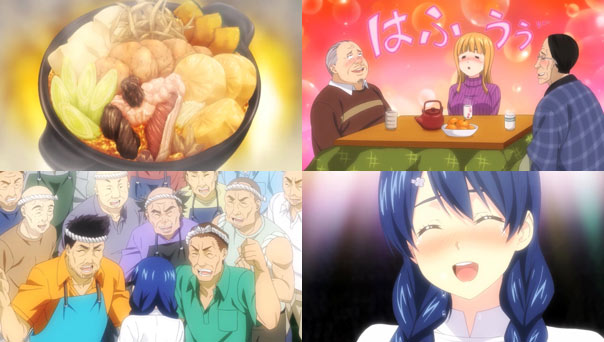 in their haste to wrap up the competition with a vote to break the tie of Miyoko and Isami, everyone forgets poor Megumi, who, perhaps appropriately, must follow up the most futuristic dish from an alien world with the most down-home traditional dish from her hometown. Nay, the dish, a monkfish curry hot-pot, IS her town, through and through, from the fish to the vegetables to the preparation, it brings the disoriented judges back down to earth and wraps them in warmth and love.

Meg earns 88 points and a spot in the final eight, proving her convictions and technique are no gimmick, and also proving to Miyoko that while you can shut men up with sheer force and fire, you can also earn their respect and admiration with sheer determination and water, as we see from Megumi’s assembled fellow townsfolk.

Thus ends the Group B prelims, with Alice, Hisako, Takumi and Megumi moving on. On to Group A, where the other blonde bombshell judge has yet to award a single point with Alice’s aide Ryo about to present.

Sleeping Souma was a red herring! He was just nodding off a bit waiting for the perfect time to add his spices and fill the kitchen arena with a tantalizing aroma that even Hayama Akira must acknowledge has promise. But that’s pretty much it for Souma this week, as all eyes are on Megumi in much of the episode’s first half. Just when the “bumpkin” is being chastised for her lack of showmanship and clumsiness, she unveils a giant monkfish hanging from a tripod.

After remembering how hard she trained back home, under the tutelage of a big burly fisherman, she prays for Souma to lend her some of his courage, then butchers the ungainly fish like a pro, impressing everyone, even then very hard to impress Hojo Miyoko. Both girls have had to work that much harder to gain the respect of their elders due to their gender, and in Megumi’s case, her gentleness. But she’s a lot tougher thatn she looks, and proves it again here.

With that performance, the clock runs out and the cooking is complete. Now all that’s left is for the five judges to grade the students’ dishes on a scale of 0-100 (with each judge having 20 points to award). Even though they heap praise on the first dish, they award a measly 33 points, jaded as they are by years of impeccable culinary excellence, “pretty good for a student” ain’t gonna cut it. 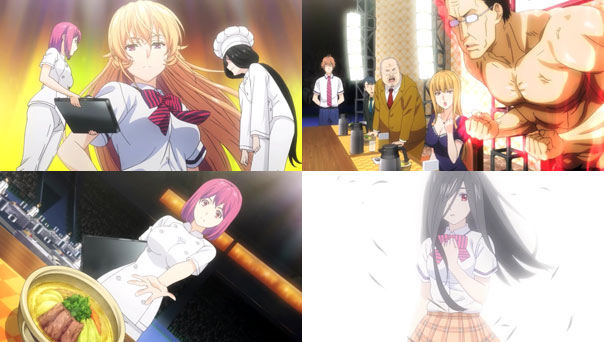 With Nao having set the standard for her group thus far in the most unorthodox way possible, her arch-nemesis and rival for Erina’s heart (and verbal abuse) Arato Hisako steps to the plate with a seemingly safe-looking curry bowl made with mutton. But her approach, steeped in her family’s traditional focus on Eastern medicine and medicinal cuisine, has the opposite effect on the judges, purifying and revitalizing them rather than beating them into submission.

Hisako’s dish is essentially the antidote to Nao’s, which is apropos considering their diametrically-opposed personalities. Both are great chefs, but Nao cooks for her own sake, while Arato claims to cook for the sake of others, including Erina. She even gives Nao a bowl, destroying “Dark Nao” in a cascade of medicinal light and giving rise to a much purer “White Nao.” Nao’s defeat is so complete, her masochistic side causes her to shift her fixation from Erina to Hisako. Love is in the air!

I’m guessing this is how the remainder of the episodes will pan out: episode 22 will cover the judging of the Aldini brothers, Alice, Megumi, and possibly a few others not seen in the preview (like Miyoko and Yuuki); episode 23 be Souma and Akira, and 24 will be the wrap up. That’s assuming this show will end at just 24 episodes…which if you ask me and Hannah, would be a crime.