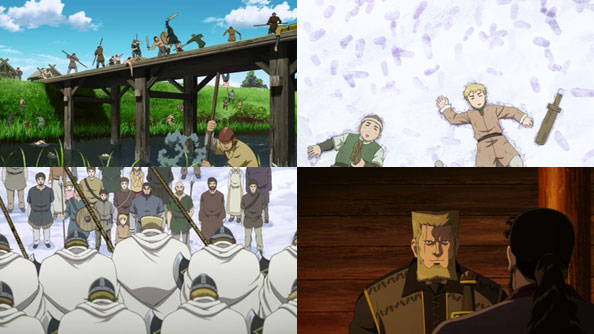 As the English launch an ambush on their Danish occupiers during their Saturday bath (note to self: switch up bath days for this very reason) in Northumbria—slaughtering men, women and children indiscriminately—the children in Thors’ village, Thorfinn inluded, participate in mock battles using blunted wooden swords and spears.

It’s a simple but effective juxtaposition of the ideation of war as a grand, noble, and honorable venture, and all it really boils down to: people ending the lives of other people, often without even the slightest hint of grandeur, honor, or nobility.

Thors ended many lives as a warrior, but those days would seem to be over, as he now takes smithing classes not to make weapons, but to make cooking pots. But his old comrades, the elite Jomvikings, have other ideas. A warship captained by Floki land at the village, their mere presence a transparent threat. 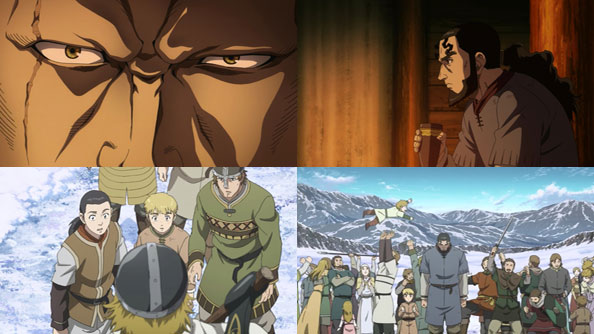 It’s revealed Thors essentially deserted when he jumped into the ocean and cast away his sword. The Jomsvikings don’t take kindly to desertion, but they’re giving Thors one chance to repent because he is a skilled warrior. Floki gives him an offer he dare not refuse, because now that they know of his village, it’s the villagers—and his family—who will suffer if he does.

As Floki makes the announcement that Thors has agreed to join their campaign and will need volunteers to crew his warship, the entire village erupts into celebration: finally, a war! But the only one who has actually seen war—Thors—is the very picture of gloom.

As they drag the village warship out of mothballs and prep her for the voyage to Jomsberg, Thorfinn gets a bit overzealous during the mock battles, injuring a couple of kids four to five years older than him, breaking one of their arms with his wooden sword.

When he gets home he tosses that sword aside, because he wants—he thinks he needs—a real weapon. Snooping around the storage room, he soon finds a stately chest, full of Thors’ old regalia and weapons (minus the sword he tossed). 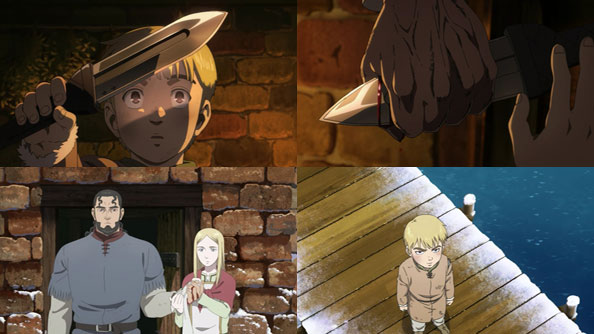 When Thorfinn takes a dagger in his hand, unsheathes it, and holds it up to the light to admire, his father’s huge hand closes upon it, as powerful and concise an image as Vinland Saga has conjured thus far. Thors isn’t the kind of dad to rage or even raise his voice to his kids, so when he asks his son who he plans to kill with these weapons, it carries even more weight.

Thorfinn, all naivete and bluster, says he plans to kill “the enemy,” but Thors asks him who that is, knowing he has no idea. In his many brutal bloody battles, Thors gradually learned that fighting and killing is ultimately pointless, which is why he cast it aside. But his son has already been influenced by his peers and by the presence of the Jomsvikings.

Thorfinn also thinks his father is being hypocritical, as he’s heading out to war. Never does it occur to him that he shouldn’t be thinking about fighting in any battles anyway simply because…he’s six damn years old. 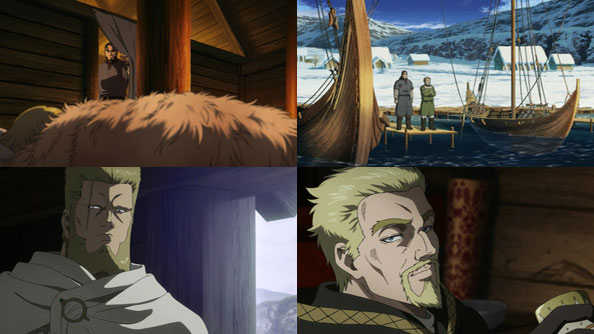 As Helga stoically cleans the dagger wound on his hand, Thors tells her to take care of Thorfinn. The next morning, Leif, who is joining Thors, tells him the conditions are right to begin the voyage, and Thors takes one last look at his sleeping son before departing.

Meanwhile, on one of the Faroe Islands, Floki is meeting with someone named Askeladd, who has been contracted by the Jomsvikings to kill Thors, in exchange for five pounds of gold. Thors is sailing into a trap, to his death, and there’s no guarantee the village will be left alone if and when he’s taken out.

The question is, is he as reluctant and morose about having to mobilize simply because he thought he was done with this shit…or because he knows it’s a trap, has no choice but to sail into it, and can no longer guarantee his family’s safety?

Yamato Yura is excited to be starting her sophomore year of high school at Stella Women’s Academy, but has troulbe making friends and doesn’t like big groups. However, when she’s walked in on by a member of the “C3” club, they take an instant interest in her. She meets Hatsuse Karila, Hinata Yachiyo, Kirishima Rento, and Mutsu Honoka, who participate in mock battles akin to war games using airsoft rifles and pistols. She’s initially weary of joining, but Kirishima insists. She participates in a “Rambo”-style battle with Karila as Rambo and the other four as sheriffs. As the battle heats up, Yura starts to get it, and “steps in to a new world.”

Ahh, Girls With Guns. For some people, it will never get old. We’re some people. Especially since they’re not real guns; it’s all good clean fun with “airsoft” weapons (and candy bars for knives), while the club drinks tea and eats cake when not going to war. Parallels to Girls und Panzer are inevitable, but this episode felt a lot less “aw shucksy” and earnest than that series, with more of a chip on its shoulder and a potential for more comedy. We’re still learning the girls’ names (and their guns of choice), but the C3 club has a looser vibe to it; no one’s getting disowned and the fate of the school isn’t on their shoulders.

And yet, once the battle begins, the girls are all business, with Karila operating as a one-woman wrecking crew and the others working together like a well-oiled machine. Yura, who is searching for somewhere to fit in, knowing it’s not with the cliques of chatty, gossipy “normal girls”, is in awe of the spectacle before her, and the moment she gets into the swing of things, triggering her vivid imagination, is the moment she realizes she may have just found that place where she’s accepted for herself. She only has to embrace the weirdness…and learn to hold her gun correctly!