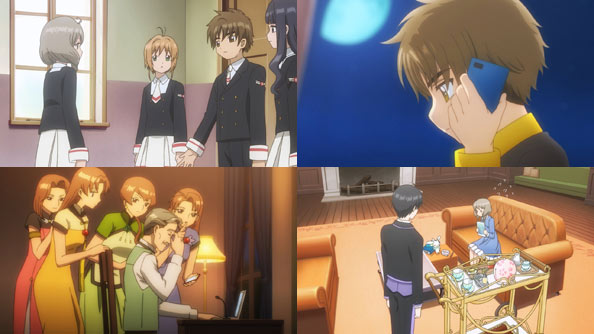 Sakura’s a wonderfully kind person, and so it comes as no surprise she’d go to the pediatric ward to read to children. I also think she intrinsically understands she has a tremendously entertaining voice, and it would be a shame not to show it off once in a while!

Tomoyo is coming to film the event (of course), and Sakura manages to recruit both Akiho to help her read and Syaoran to accompany them with piano. She achieves this by knocking both their HP levels to zero with her thoroughly persuasive glare.

Syaoran checks in with Wei for help with scoring the book (and denies his four doting sisters’ request to see him on video mode), while Akiho studies the storybook and marks in a notepad all the places she’ll have to be careful (Japanese not being her first language an all).

After being given simple yet elegant tunics and caps, the two read the story of the Fox and the Mittens to the assembled children, all while Syaoran plays the organ, an upgrade from the piano.

It’s a delicate and beautiful presentation, an interesting departure from the usual formula of the show. This is also an episode in which Sakura doesn’t capture a card, and doesn’t even say her trademark “Hoe” once!

When the crowd gets riled up at a perilous point in the story, he quiets them with a flourishing solo, allowing the girls to get back on track. All in all it’s a tremendous success, and the group of kids come away not only entertained but impressed with the skills of the storytellers and organist. 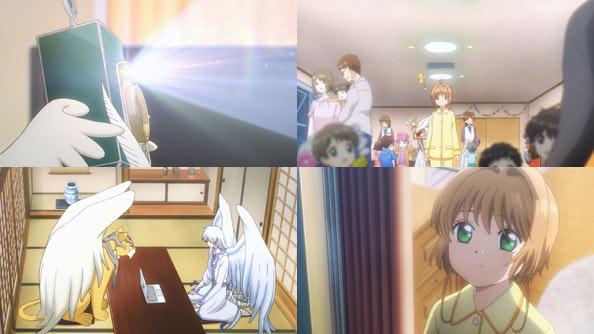 Tomoyo caught everything on tape, but Sakura managed to stealthily release her Record card. Unfortunately, the footage it took is from over thirty years in the past! Sakura is disappointed; she must’ve “done it wrong.”

Upon seeing this, Kero-chan finds an excuse to rush to Yue’s place and inform him of what she did. Sakura has become far more powerful than either of them could have imagined, to the point it has become imperative they inform Eriol, of whom we’ve only gotten the slightest glimpses so far.

Hwelp, I’m an idiot. I was pretty darn sure the end of last week was the beginning of the end of Kayo–again–but I was mercifully mistaken: it was only a very, very close call. That’s not to lessen the seething tension of the episode’s first moments when Kayo isn’t sure what’s going to happen, but a lot of that weight I talked about (not all, but a lot) was lifted. Who the shit cares if I read the scene wrong, or the show “tricked” me by deviating from its usual pattern? Kayo’s still free and breathing!

This means Satoru gets to see Kayo again, and is able to provide her with lunch thanks to his mom, who was up even earlier than he was preparing meals. One for him, another for “lunch”, but really for Kayo, as the note in the bento box confirms. At this point, Kayo’s mom has a pretty good idea what her son is up to, and is letting him keep his secret for now, having faith he’s doing the right thing and silently supporting him.

At school, Kayo’s consecutive absences draw the attention and conjecture of the whole class, and Satoru asks the Yashiro of this timeline to act once more. Turns out he already has contacted social services, and accompanies them to Kayo’s home.

Kayo’s mom managed to sneak out just as they arrived, meaning it’s not yet time to rest easy, but at least the proper authorities are aware of the situation and intend to get Kayo away from her mother as soon as they can.

Satoru, Kenya and Hiromi keep Kayo company that night, giving her the opportunity to present Satoru with his belated birthday present: a pair of mittens she knit for him. Considering what became of the mittens back when Satoru failed to save her, I’m not surprised Satoru can’t help but tear up with joy and relief at the sight of them.

The previous night’s intrusion didn’t result in Kayo’s demise, but it did spell the demise of the bus as a viable hideout, especially when they discover the contents of the backpack the man left behind, which Satoru instantly recognizes as the tools of the serial murderer, including that damnable spray bottle used to accelerate hypothermia.

I don’t think he noticed future first victim in Nakanishi Aya as he walked past her that morning, but with Hiromi as the second victim, it’s abundantly clear the bus and its environs are the nexus of the tragedy he hopes to avoid. They all have to get the hell out of there. But where will he stash Kayo? Why, at his house, of course.

Such is Satoru’s knowledge of and faith in his loving mother, he knows bringing her there is the right move, and a move she’ll gladly accept. She’s seen Kayo and knows the miserable, loveless life she’s been forced to lead until meeting her son.

Nowhere is it clearer how raw her wounds from that life still are when Kayo instinctively recoils at the sight of Satoru’s mom’s approaching arm. Were it her own mom’s arm, it would have meant a strike; instead, her head is gently patted.

After feeding everyone and sending Kenya and Hiromi home, Sachiko calls Yashiro to inform him of what he expected – Kayo is safe and sound with Satoru. When she asks if Kayo really has to go away, I thought about the possibility of Sachiko adopting her, so she could have some constancy in her life.

Sachiko then goes out of her way to make sure Kayo feels as loved as possible on this night. The hot dinner with friends, a hot bath, having her hair washed, being given new, fresh pajamas, drying her hair properly, and sharing a warm futon with Satoru and his mom (lying strategically between the two) – everything is a new and wonderful experience for Kayo. 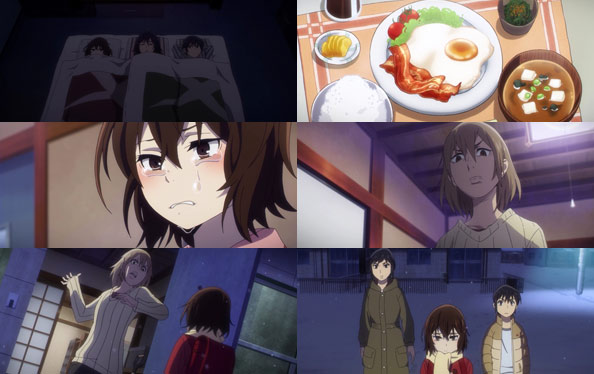 That morning, Sachiko cooks her a hot multi-course breakfast, so far removed from the lazy, thoughtless breakfasts of cup ramen, bread, or spare change her “mom” provided, and Kayo can’t hold it in anymore.

She starts bawling at this attention and care and love she’s never gotten before. The 11-year-old Satoru might’ve taken this kind of treatment from his mom for granted, but the 29-year-old knows better, and understands Kayo’s tears as well as his own good fortune.

Later, Kayo knocks on her own apartment door, and her furious mother, who was in the process of trashing Kayo’s room, answers, winds up for a vicious slap, but stops in her tracks when she notices Kayo isn’t alone. Kayo and Sachiko flank her like bodyguards. Hopefully Kayo will never have to be alone with her pathetic coward of a mother ever again.

This was a generous episode not just because it didn’t kill Kayo in the beginning, but because it ends not on a note of uncertainty or imminent disaster, but on a note of potential triumph. Certainly, a lot of setbacks can occur in the four remaining episodes, but for now those possible troubles feel far away.