Mimasaka Subaru is revealed as a major secret weapon of the rebels, as his unique tracing ability not only perfectly mimics his opponent Saitou Soumei, but his own ally, Kuga Terunori. As a result, Tsukasa Eishi is, in a way, up against two chefs at once, without the rebels breaking the rules of the Team Shokugeki. 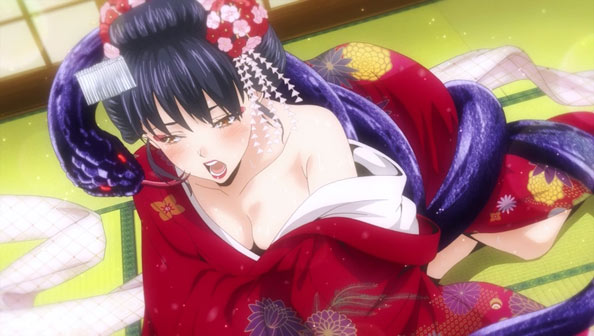 Subaru’s preparation went further than that: he traced all of the Elite Ten (including their look and mannerisms). By perfectly copying all of Saitou’s moves in real time, Subaru is able to dish out the exact same plate of ten succulent-looking maguro sushi bites, plus an eleventh that Saitou didn’t make.

A skeptical Urara (still in full Central Punk-Fangirl Mode) has a taste, resulting what she claims to be her first foodgasm reaction shot in the whole series—that of a geisha being seduced by a purple snake with ruby eyes.

But when all’s said and done, Subaru wasn’t entirely perfect in his trace; he was tripped up by the size of the sushi, applying the same number of “invisible cuts” as he would a normal-sized piece of fish, resulting in premature melting in the mouth that doesn’t give the flavor time to reach its peak.

The Bookmen noticed that, and they also found Rindou’s spicy alligator dish surpassed Megishima’s African Ramen, so Central wins the second and third bouts, inviting shameless gloating by Urara. That means the rebels are in deep trouble if Kuga can’t defeat First Seat Tsukasa, the White Knight of the Table.

Then again, defeating Azami’s oppressive regime always meant beating their Number One. If that can’t be managed, the rebels never had a chance of winning in the first place.

With Lunatic running wild murdering murderers, public opinion around Sternbild is starting to sway in his favor. I mean, it’s not like he’s killing innocent people, amirite? Next to him, the heroes look a bit impotent. So Apollon Media decides to send out their heroes for some good ol’ PR. You know, rather than looking for Lunatic. They end up a Barnaby’s former school, which bears a slight resemblance to Professor Charles Xavier’s.

This series has gradually been delving deeper into various characters, obviously starting with Tiger, then Blue Rose and Bunny, and this week it’s Ivan/Origami Cyclone’s turn. I have to admit I initially found his sudden and intense self-doubt a bit strange, and I was definitely perplexed when Tiger exhibited surprise at his special power of mimicry. Haven’t these two fought together before? Mimicry is most definitely a useful superpower. It’s baffling that he hasn’t figured that out at this point in his career.

While mopey Origami wasn’t all that interesting, I like how they weaved Lunatic into the story, just when you thought he was on a break this week. Lunatic also seemed a lot less invincible than last week, as Tiger was able to soar into the sky and smash his mask. We even see him sans mask…what a girly man! Another plus: not all NEXTs have powers that are well-suited for heroism. Some are seemingly just circus freaks. Then again, Fantastic Four and X-Men made it work…Rating: 3