When the stage is set at the end of this stage-setting episode, Rustal calls McGillis “just a child who can’t grow up,” referring to his obsession with shining monolithic superheroes who can bring righteous light to the world.

Rustal is probably right. McGillis can’t grow up. He’s been portrayed as the upstart kid at the adult’s table; an iron-blooded orphan who suffered just as much trauma as the kids of Tekkadan. Learning that Iznario Fareed was a pedophile who collected blonde boys paints Macky’s past even blacker.

To say he grew up far too fast ignores the fact that the ordeals he had to endure didn’t embue him with all the subtle qualities required for proper development. They only taught him the absolutes of weakness and strength; the only subtleties being in the various forms of power.

With Mika assisting in capturing Gjallarhorn headquarters, McGillis believes he has finally achieved his goal of resurrecting the hero that propelled him, Agnika Kaieru, the tool that will cleanse a dirty system. He renames his rebuilt Bael Agnika Kaieru to commemorate his imminent victory.

Vidar turns back into Gaelio Bauduin this week, after spending much time correctly ascertaining McGillis’ true goal. For the time they grew up as friends and brothers, Gaelio thought he already knew the McGillis behind “the mask” (not his physical one), until Gaelio betrayed him and Carta.

Now that he knows what McGillis wants, he’s going to stand in the way, not just for his Gjallarhorn, but his family. And he’s come in a Gundamn frame imbued with an faux-A-V system and Ein Dalton’s brain.

The results are pretty impressive, as Gaelio is able to keep up with Mika and keep him guessing, even getting him to quietly admit “this dude is big trouble.” It certainly looks like McGillis has been outmaneuvered here, with Rustal’s dog able to fight on the same level as his dog, possibly necessitating his own personal involvement in the fight earlier than he’d like.

But as it turns out, everything seems to be going the way McGillis had hoped, and he’s more than ready to join the fray immediately. Gaelio/Ein is merely giving him the opportunity to test his research. They are an obstacle he will swat away, and with Tekkadan’s help, complete his conquest of Gjallarhorn.

Mika, Orga, and Tekkadan are all counting on this shirtless, suddenly slightly unhinged-looking McGillis for all their fortunes. They cast their lot with him long ago and it’s far too late to back out, even if they wanted to. Now we’ll see if he’s actually on to something, or if Rustal is right and he’s just a kid who can’t grow up.

I may have railed a lot against Jasley as a villain, but in exchange for putting up with him, I got to behold one of the most visceral IBO battles yet, so good in part because there’s no foreplay and no dawdling. All our Tekkadan boys are stone-faced and businesslike in their hugely satisfying, meticulous taking-down of Jasley’s larger fleet. We start in the middle, when things are already going badly for ol’ Jazzers, but he still holds out hope Iok will come to bail him out (he won’t).

Hush gets to do some stuff in a new suit, and I kinda liked while he held his own, he wasn’t out there dominating or anything. He also got to crack a smile. When he and Shino return to the ship to refuel, reload, I also appreciated the scenes of out-of-breath pilots taking a breather and grabbing a quick bite and drink while they can. 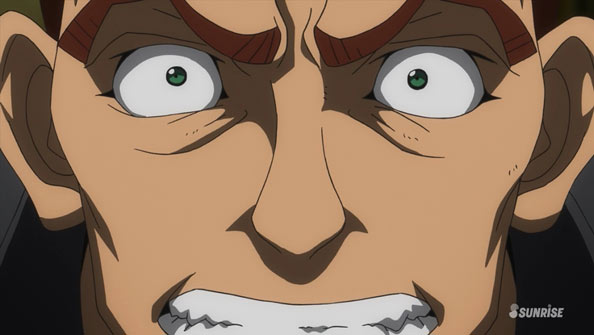 Also fun is the fact that from the very start of the episode, the Jasley we’re shown seems…different. He may have the bigger fleet, but they’re all unreliable mercs, and he somehow looks smaller and more vulnerable on his paisley-lined bridge, swapping his pimp duds for the same spacesuit as everyone else.

As things go worse and worse for him and his defensive line begins to crumble, he keeps yelling mostly to himself about how none of this makes any sense: he’s a good earner, he deserves the top spot he’s trying to take from McMurdo. He’s simply unprepared for the intense level of resolve the foes he so easily made are carrying with them. He’s literally kicked a hornet’s nest.

He sends out human debris pilots, in hopes they’ll be a match for Tekkadan. Zack asks if it’s really okay with Chad and Dante to be fighting…their ‘own kind’. Chad get one of the better lines in an episode full of them: “Our standings and backgrounds don’t matter. Everyone with a weapon is equal. We just crush them.”

All hope of the cavalry arriving is lost when Jasley contacts McMurdo to try to work something out, to get him to call off his Tekkadan dogs. But McMurdo turns out to be a lot less old and out of touch than we might’ve thought last week when Jasley was able to undermine him so easily.

No, Iok isn’t coming; McMurdo had a talk with Rustal, who is keeping Iok in check and ignoring Teiwaz affairs in exchange for Teiwaz forgetting about the Iok’s attack on Turbines. And since Tekkadan isn’t part of Teiwaz anymore, the only person Jasley has to sort out his problems is…Jasley. It’s a great little phone call…so devastating. 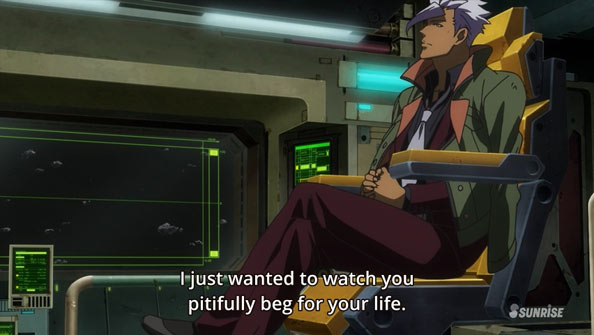 Does he jump in his souped-up mobile suit and take the fight to Tekkadan? No; when Tekkadan is close enough to start taking potshots at his flagship, he calls Orga to surrender. I guess Orga could work out a pretty sweet deal with Jasley, but it’s clear Orga just wants to watch him beg, and isn’t even that entertained by it.

With that, he sends in Mika, who asks Orga what to do, standing over Jasley’s bridge with his weapon drawn. Orga says crush ’em; Mika crushes them, and that’s that. With Jasley gone, and Naze, Amida, Lafter, and all the others he killed avenged, Orga breathes a deep sigh of relief.

Everyone agrees that while the departed probably aren’t too happy with what they did (and what they had to give up to do it), they still did the right thing. Now Tekkadan can truly move forward towards kingship of Mars. And they don’t need Teiwaz anymore.

Instead, they’ll be joining the Gjallarhorn revolution that announces its existence not long after Tekkadan finishes things with Jasley. McGillis has rightly pinned the blame for the SAU-Arbaru conflict with Rustal, and now that Teiwaz and Rustal seem to have an understanding, it’s possible Tekkadan might fight against Teiwaz in the future. And now that Tek’s cut ties with Admoss as well, Kudelia finds herself on the outside looking in.

But for now, they have a powerful ally who shares their ideals, and will fight beside him as he roots out the rot of corruption that has plagued Gjallarhorn too long. Orga and McGillis’ original deal still stands. In hindsight, Jasley never really had a chance to disrupt it.