As one could have predicted with reasonable certainty, the episode immediately following DanMachi’s biggest battle to date was a much lighter weight affair. You wouldn’t immediately know it from the cold open, which features huge armies of the Kingdom of Rakia approaching Orario.

Then entire companies of soldiers are “blown away” by solo adventurers. Turns out they’re not tough…at all. Aries is a buffoon of a commander of a vast army of weaklings, and his buffoonery annoys the hell of of his top lieutenant Marius.

Meanwhile we learn something new about Haruhime from Aisha as she bids farewell: whenever she saw a naked man she’d pass out, meaning she remains as chaste as the virgin goddess of the hearth. Aisha doesn’t tell her that, but she’s right that it didn’t matter to her hero, Bell. 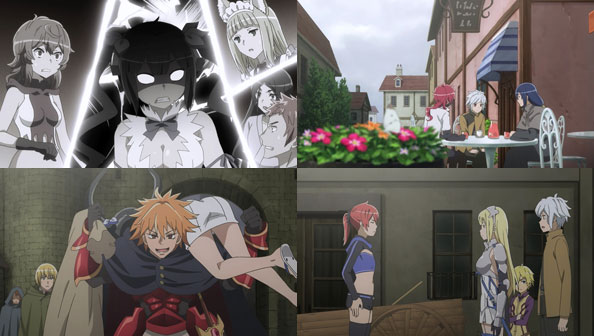 Still, Haruhime’s wonderful chemistry with Bell causes a jealous Hestia to ban all contact between the sexes, which Lili makes a big stink about. When Hestia all but asks if Bell would be her lover, he refuses, honestly but also flatly and rudely, not taking into consideration just how much Hestia loves him.

She runs off, and Bell chases after her, realizing he erred. A chance meeting with Hephaistos and Miach has them confirming that he erred by not showing his goddess proper respect. They discuss how even though the lifetime of a mortal is but a moment, the love gods feel for their mortal lovers is not any less powerful or real.

Unfortunately these two gods hold Bell up long enough that Hestia manages to sneak out of the Orario on an errand to gather ingredients for the potato snacks so popular in the city. Ganesha lets her through due to the importance of her mission, but she’s quickly snatched up by Ares in disguise, executing a “brilliant plan” to get Orario to surrender by taking a god hostage…or…sigh….godstage.

Bell ends up bumping into Ais, who takes him to where Hestia was last. There, Loki is coordinating a rescue op; she may not be besties with the shrimp but they can’t go letting Ares kidnap gods whenever he likes. She agrees to let Bell accompany Ais outside the walls to track Ares down.

Fueled by awesome Celtic-style overworld music, and with help from Hermes’ child Asfi, they locate Ares in the gray gloom, and it isn’t long before Ais is crossing swords with Ares, and just as quickly snapping his sword. Like his armies, he’s not as strong as he looks.

Still, he has enough numbers to surround and isolate Ais, while Bell manages to sneak around and reunite with Hestia, who freed herself but promptly stumbles and falls down a huge canyon. Bell jumps in after her, then Ais jumps in after him, setting up a cliffhanger for the finale next week. Chances are they’ll all be fine!