Maybe it was because I was so tired, but I was off in my assessment of Tomoya’s assessment of Utaha’s script. It’s not that he demanded perfection; his true qualm lies in his exact words: “It’s a crap game.” Meaning, the script is written like a novel, and is thus unsuitable for a dating sim. This is why, as compelling as it is, it must be re-worked.

Of course, Tomoya delivers his criticism with all the delicacy of a sledgehammer through a plate glass window, and he and a still-stunned Utaha have a little shouting match in the maid cafe of what is otherwise, mercifully, a completely in-the-background school festival.

Tomoya is a rude ass about it, but he’s not wrong, and after making Utaha cry, Tomoya is contrite and assures her she did nothing wrong; it was he who failed as game director, getting sucked into the text without considering how it would fit in a dating sim structure.

As he attempts rewrites, Utaha sleeps in his beat, deflated from the rejection of her new arc, which, by the way, was an arc in which the character most resembling her gets the guy rather than the character resembling Megumi. Megumi calls Eriri to report Utaha’s whereabouts, but Eriri is unconcerned.

Eriri’s been in the boat Utaha’s in right now, and can relate, and in any case, she’s got a mountain of her own work to do, surrounded as she is by crumpled balls of art that don’t meet her standards or vision. Eriri isn’t even interested in entering the Miss Toyogasaki Pageant, despite being the reigning champ. 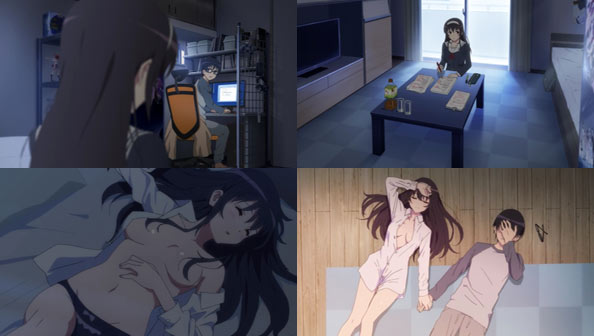 From there, it’s almost a purely Utaha-and-Tomoya episode, with the two combining forces in a creative odyssey during which Utaha gets so exhausted she falls asleep wearing only an open dress shirt and panties, much to the painfully oblivious Tomoya’s shock.

They re-work the Ruri path, then Tomoya gets it in his head he needs a third arc as well: one in which everyone lives happily ever after, which also seems to match what he wants in real life with Utaha and Megumi. While initially frustrated Tomoya wasn’t responding to her feelings, by the end she comes out confident they’ve made a stronger, more fun game by working together. 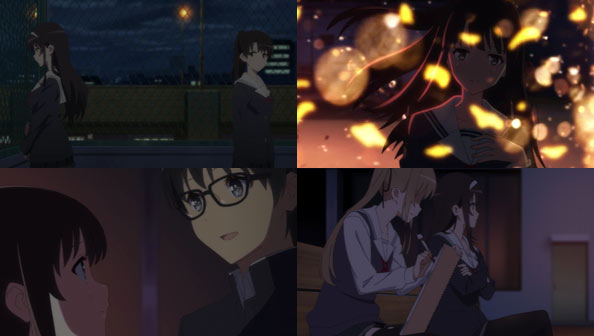 On the evening the festival ends, when the bonfire is about to be sparked, Megumi asks Utaha, her writing duties now complete, if Ruri is based on Sayuka from Metronome in Love. And she is; of course she is, because both of them are actually Utaha. And Utaha makes it clear she still hasn’t given up on the ending in which her character is chosen by the protagonist.

Megumi straightens out and her eyes focus upon hearing this, before bowing and heading down to the bonfire, where she romantically approaches Tomoya. Megumi tells him she’s not Megumi right now, she’s Ruri, Sayuka, and also…then takes his hand, and dances with him, as Eriri draws them and Utaha looks on. Lovely stuff. 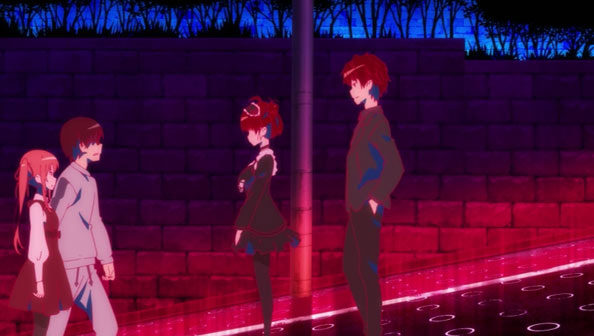 Tomoya and Eriri find themselves suddenly confronted by the Hashima siblings, whose Rouge en Rouge game company put out a demo of a game very similar to their own.

While Megumi does her best to keep things diplomatic, it isn’t long until Eriri and Izumi are coming to blows. 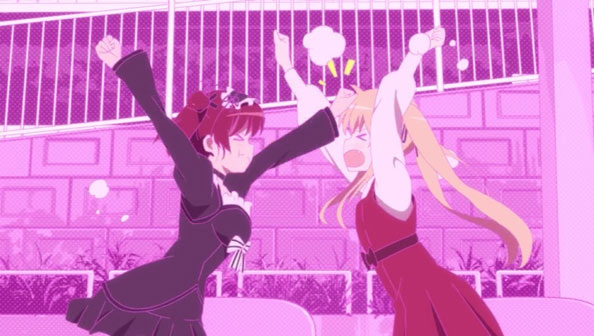 Sure, they’re low-impact blows, and each seems to want to empower the other to do their utmost to beat each other (at art, not physically), but then there’s the fact that, at the moment, I don’t much care particularly how well Blessing’s game does relative to Rouge’s.

Isn’t it enough that the team works hard and puts out a game they can be proud of, into which they put their blood, sweat, tears, and passion?

In between acting like she and Tomoya have been married for years, irking certain male classmates, Megumi is preoccupied and fired up by Utaha’s surprise story revision.

But the only way they’ll know whether it works or not, and which script to choose for the game, is by implementing it. That means a lot of work just to catch up to the Rouge demo, with no guarantee their output will surpass their rival’s.

When one all-nighter involving Tomoya and Megumi only nets 20% of the work, other measures need to be taken. When Michiru suddenly arrives, appalled that Megumi spent the night, Tomoya sees an opening, and asks his cousin to recruit her Icy Tail bandmates into doing the gruntwork necessary to plug Utaha’s new story into the game.

They pull a second all-nighter, and considering how late I’m writing this on a Thursday night, I can’t say I don’t relate to their exhausted state when they’ve completed their task. 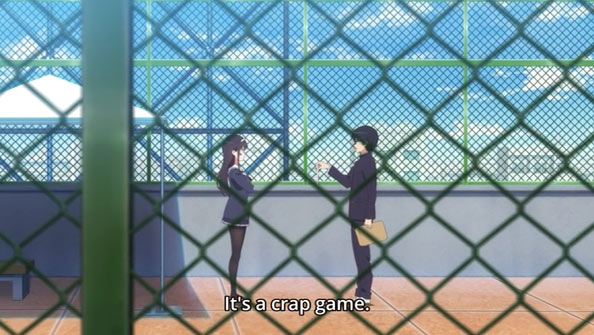 All that work makes it that much more harsh a slap in the face when Tomoya meets with Utaha and utters the line above. Apparently, after story, art, music, and programming have been combined, neither of Utaha’s stories cut the mustard; at least not now that Tomoya is convinced Iori has a better story up his sleeve.

He requests a complete rewrite—certainly his prerogative as game director—but I assume Utaha is dismayed by his blunt assessment, as I was. In an attempt to outdo Rouge, could Tomoya be overplaying his hand? By demanding perfection when perfection may be unattainable, will he only end up driving his partners away one by one?

Utaha has finished her script, and to celebrate has Tomoya take her out for a day of shopping, dining, and watching films that aren’t poorly-received (i.e. ghosty, shelly) live-action anime adaptations.

It’s a date, no doubt about it, at least as far as Eriri is concerned, observing the couple’s interactions from afar like, well, a stalker, with Megumi forced to tag along for plausible deniability.

But Utaha doesn’t merely toy with Mr. Ethical: she makes it a point to bring up the fact that now that the script is complete, her job with Blessing Software is also done, and she’s looking to the future.

She asks Tomoya his opinion not only on where she should attend university (out in Kansai or fifteen minutes away) as well as to pick which script should be used: she wrote two. She’s basically telling the director to choose a direction; not unreasonable.

When Eriri and Megumi meet with Tomoya (thanks to Megumi having a key to his place!) they see the ending and see Tomoya’s dilemma. Eriri both acknowledges Utaha’s artistry, comparing it to the Metronome of Love series she claims to have never read, while complaining that it’s a lot more work.

Still, she doesn’t automatically reject this new ending, nor does Megumi: they, like Utaha, leave it up to Tomoya. Sorry dude, gotta make some hard choices, and not everyone is going to be happy. Especially with Izumi’s doujin game already out there in demo form, living in the same genre as their game.

Saekano excels when Tomoya is one-on-one, as he is with the lovely Utaha most of this episode. But I also liked how their interactions were shadowed by Eriri and Megumi (especially the difference in Utaha and Eriri’s reactions to the movie, which chose a “childhood friend-friendly”, and thus Eriri-friendly, ending).

I can’t say whether the script of Saekano is cliched per se; all I can say is that it is unafraid of commenting on the very genre and medium it exists in, or of being almost self-back-pattingly self-referential and irreverent of those institutions.

But the dialogue is expertly delivered by the actors, and the character design is strong, so even if this show’s ‘weakness’ is its script (which I’m not saying is the case), it’s more than capable of making up for it in other areas, which makes this show enjoyable to watch on any given week.

But I don’t think it needs a live-action adaptation. 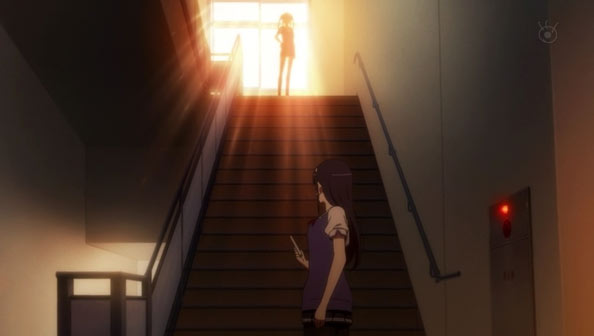 “Why are things so bad between them?” asks Mr. Awful Thick-Headed Deaf Protagonist, AKA Aki Tomoya, referring to the near constant bickering and fierce competition between Eriri and Utaha. Cue a flashback to a year ago when the two rivals first meet, and Eriri learns Utaha is not only the author of the “Metronome In Love” novels she enjoys with Tomoya, but that she’s trying to snatch her Tomoya away.

Eriri tries in vain to steer Utaha away from Tomoya, while Utaha is irritated to learn how well Tomoya knows his childhood friend Eriri. Utaha brings Eriri up to Tomoya because she’s “interested in knowing more about her”, meaning she’s eager to gather info on a foe.

For all the contempt Eriri and Utaha have spewed at one another throughout last season, they are nonetheless connected by a strong underlying mutual respect. They’re not just foes, but worthy foes. And however much they may differ in creative philosophy, neither can deny the other’s obvious talent, or even be a bit envious of it, considering they excel in different areas (Eriri art, Utaha words).

Utaha learns that Eriri’s motivated by revenge for all the frustration she’s suffered having to hide her talent away beneath a pristine social facade; while Eriri believes she has the haughty Utaha figured out as a cold, calculating ice queen who looks down upon and manipulates her fans with her technique. Neither is wrong! 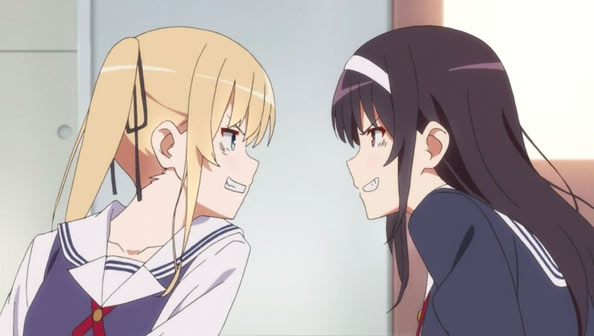 So back in the present, while they’re still bickering as fiercely as when they first met (with Tomoya as the totem of their rivalry), they can still acknowledge one another’s skill and passion for their craft, and can agree with Tomoya when he says theirs could be a collaboration for the ages.

The praise and enthusiasm of the guy they both like makes it easier for them to look past their surface hate for one another, and the value in working together, even if it’s not always, or ever, smooth sailing.

When Tomoya requests an illustration by Eriri autographed by both her and Utaha as Kashiwagi Kazumi, Eriri, Utaha, and Megumi also requests autographed illustrations. The apparent mortal enemies proudly hang them in their homes, proving their respect and admiration for one another beyond any doubt, even if they’d never ever say it to each other’s faces.