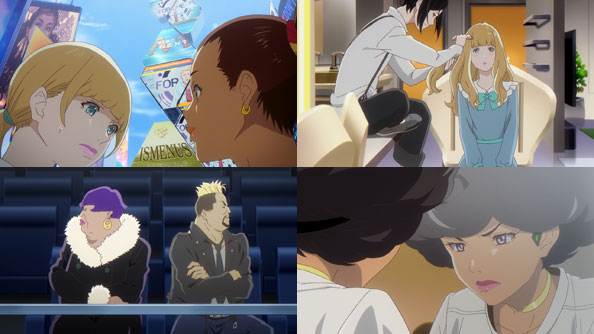 Carole & Tuesday don’t sing on the second day of competition, but Gus has them attend the studio anyway so they can scout the next four contestants. One of those, Cybelle, continues acting extremely stalker-y, brushing Tues’ hair without asking first, and suggestion they form their own duo without Carole. In other odd pairings, Dahlia ends up sitting beside Gus, but nothing much comes of it. As for Angela, she wants to know where the hell Tao is. 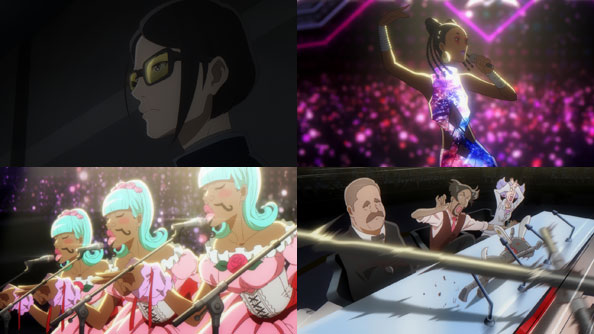 Tao is there, but seems content to stand in the shadows rather than engage with anyone. The first pair of contestants performs, starting with GGK, FKA Twigs’ Martian anime counterpart. The song is crisply produced and competently sung, but falls down on generic lyrics. Definitely not ear-bleedingly bad, but thoroughly MEH.

The gender-fluid Mermaid Sisters, on the other hand, had me howling with laughter as they proceeded to sing all manner of profanities in sweet Barbershop harmonies. It’s by far the most English swears I’ve ever heard in an anime, but it ends up disqualifying them, and the competition has to paused when they lash out at the judges, giving GGK the win by default. 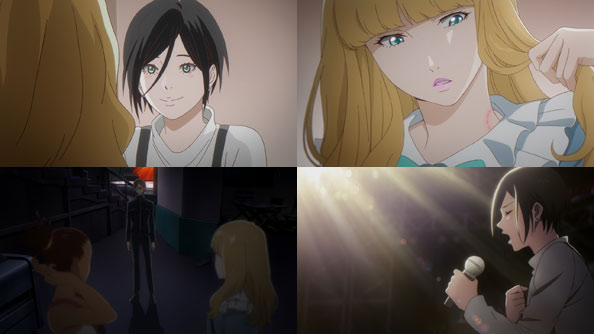 Cybelle and Angela are next, with the former telling Tuesday (not asking her) to hold her before she takes the stage. Cybelle then bites Tuesday in the fucking neck, confirming Carole’s insistence that Tuesday extricate herself from this weirdo as soon as possible.

Turns out Tao isn’t interested in Angela or any of the other contestants performing that day; instead, he asks C&T who writes their lyrics. They tell him they do, with no AIs, and he kinda just goes “huh, okay” and leaves without seeing Angela, much to her chagrin.

As intolerable as her character is, Cybelle actually delivers one of the best performances of the entire show thus far. Why is that? Because she’s not singing awful English lyrics; she’s singing awful French lyrics.

I don’t speak French, so if I switch off the subtitles, it just sounds like nice music, which it was. Not earth-shattering, but nice. If only all the songs were performed in French, or Japanese, or any language that could cover up the hack lyrics. 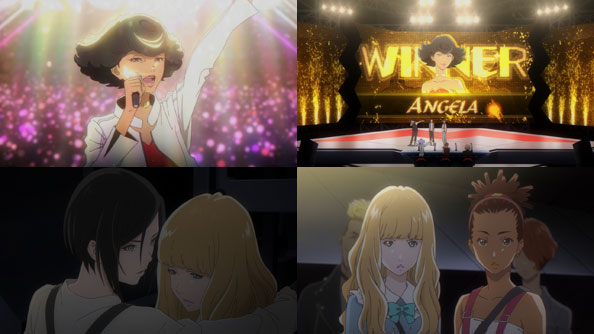 It’s just bad luck Cybelle wasn’t paired with the Mermaid Sisters, Fire Brothers, or OG Bulldog, or she would have advanced. Instead, her first opponent is Angela. And whether or not the entire production is rigged towards her winning, she still puts in IMO the best all-around performance of the competition with the very catchy “Move Mountains” song, showing that she definitely belongs there.

Angela beats Cybelle easily, but Cybelle seeks consolation in Tuesday’s arms, attempting to goad her into making a new duo together. It’s here where Tuesday finally rejects her, and Cybelle storms away in a huff, her shock quickly turning to anger.

This is most definitely not over (she has Tuesday’s contact info, after all), so now in addition to having an extremely tough opponent in Angela to defeat, they’ll have to deal with the consequences of Tuesday not dispatching her earlier. Doubtless hell hath no fury like a Cybelle scorned…