After living a tentative dream stumbling both with his one-man service request and his “replacement triangle” of Iroha and Kaori, Yukino splashed cold water on him before walking away.

Oh, Shizuka-sensei, thank God you’re here! I’m not going to ask how a teacher can afford that car—I’m guessing an on-the-side service club-for-profit of her own—but I am glad she’s arrived in Hikky’s darkest hour to counsel him.

As far as mentors go, Komachi is too young and Haruna is Yukino’s sister with her own baggage, so Shizuka is the right woman for the job. And goddamn it, if a gorgeous woman in a suit picks you up in her British GT, drives you to a bridge, tosses you a coffee and lights a cigarette, you listen to her.

You listen as she talks about how mental states and emotions one feels are not always equal. How if you can only think in terms of calculations, calculate. How it’s impossible not to hurt people; it’s just a fact of life. That instead of worrying about how not to hurt someone (again, an impossibility), try to find out why you don’t want to hurt them in the first place.  How caring for someone means knowing you’ll hurt them from time to time.

Shizuka’s saves her wisest and coolest words, and one of the central lessons of Oregairu—and growing up, period—for last:

Hikky makes Shizuka blush by telling her all the men she’s courted have had terrible taste—a very Hikky compliment—and in his head, wonders what might have been had they been closer in age. I’m thinking “Dude, when you turn 18 and she’s still single, don’t hesitate!”

But that’s then. This is now. So he thinks, agonizes, struggles, and worries, through the night. And the next day after school he knocks on the door of the service club; not as a member, but as a client: The joint Christmas event many of his own actions led to is a hot mess, and he can’t fix it by himself. But this isn’t about swallowing his pride or admitting he was wrong.

Yukino tells Hikky that people who made messes on their own should fix them on their own. Hikky agrees; Yui doesn’t, calling Yukinon unfair, and all of a sudden the discussion is no longer about his request. The event, like Komachi’s request, was simply the means to get in the door, a reason to spur action, but not the reason; the one Hikky agonized over. He cuts off Yukino and Yui’s sniping about being unfair and the efficacy of understanding through talk.

Hikky has been uncharacteristic from the start in this scene, first by knocking, and then sitting so he faced Yukino and Yui. But he really catches them off guard when he himself tears up in preparation reveals his true request, or rather desire. He doesn’t want words or mutual understanding or acceptance of each others’ “ugly self-consciousness”…he just wants the real thing, which he tearfully proclaims after a montage of all the times he believes he experienced it. But what is that? 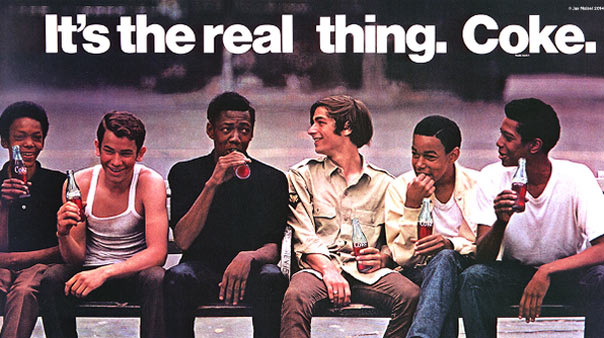 No…not that, but for many, including me, Coke is so irresistible because of nostalgia: it tastes like childhood; like a simpler time, long before we were aware of the concept that we all hurt each other, and that understanding others can be extremely difficult. But I don’t guzzle a two-liter every day. It’s a temporary retreat, not a replacement for life. Diet Coke, on the other hand, tastes like being six feet under. Just one guy’s opinion. 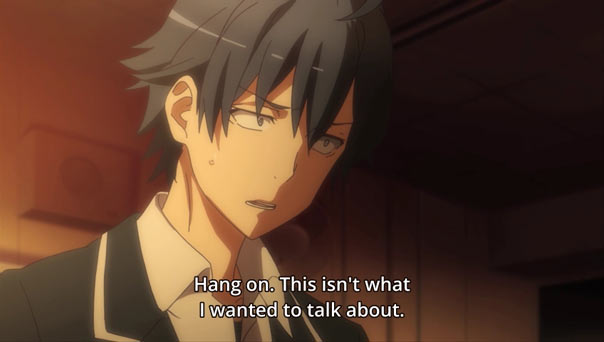 Oh. Sorry about that!

He also believes all three of them want it. Yui is able to express that right off the bat with a smile, but Yukino still doesn’t understand. She’s terrified of not understanding, and flees while clutching her arm as if she’d just been shot with a dose of radiation.

Hikky is paralyzed in the moment, but yet again proving she’s the essential fulcrum of their group, Yui snaps him out of it and urges they chase after her. Whatever Yukinon’s problem is, they can’t let it end without knowing, or trying to know. She takes him by the hand—a romantic gesture in most Japanese high schools—but Hikky’s grip loosens; not because he isn’t going with her but because he “can walk himself.”

And who is it who know where she went? Why Iroha! Yui and Hikky’s shortness with her underscores how special their three-person group really is, and how far Iroha still has to come to being as much of a priority.

Thankfully, her aim isn’t to break their momentum, but to point them in the right direction of their wayward member (on the school rooftop at sunset, for maximum dramatic impact!) There, Yui takes the lead, telling Yukino none of them understand, but if they talk more, maybe they will…and even if they don’t, they’ll at least understand that they don’t understand. Yui doesn’t even understand what she’s saying, but like Hikky, and like Yukino, she doesn’t like the way things are now.

Now, when there are things you can only do and have. Yui tears up again, as does Yukino, who calls Yui “unfair” again as they tightly embrace. Yukino says it’s unfair because they’d just fought a battle of sorts: a battle Shizuka hoped Hikky and Yui would win before someone else does later in life: the battle to get inside Yukino. With Yukino accepting Hikky’s request—upon further consideration, tears, and hugging, and perhaps even the tiniest sip of the real thing—victory is in sight again.

Last week was so grim for the service club that I’d gone ahead formulating contingencies in case it simply wasn’t to be, something Shizuka touched on during her bridge chat. This was an outstanding episode not just because it chastised its characters for having holed up inside their own heads, but it chastised me and anyone else whose hope had faltered, making me feel foolish for ever contemplating lame backup scenarios. Hikky, Yukinon, and Yui are the real thing, and their time is now. Thank God!