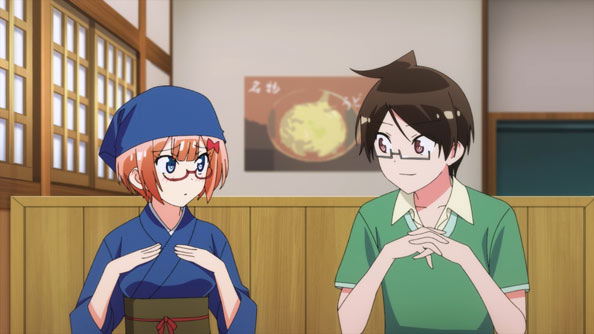 First thing to understand is that this is a continuation of a Spring 2019 series, so before diving into this I’d advise watching the first season, my mostly-glowing reviews for which you can find here.

For those who are all caught up, BokuBen 2 offers more of the same vibrant brand of ecchi-related misunderstandings between various girls and their well-meaning male tutor and friend which inherently get in the way of the tutoring, hence the English title We Never Learn!

This week, Yuiga Nariyuki spends the most one-on-one time with Ogata Rizu, in which the first such misunderstanding is a mix-up between test scores and cup sizes. Since the worst test score is an E and Rizu is well beyond E in cup size, the wording of Nariyuki’s earnest attempts to encourage her (“There’s room for growth!” “I know how you feel!” “Let’s both grasp what we want!”) only serve to reinforce Kominami Asumi’s claim that Nariyuki is a “secret horndog.”

Nonetheless, Rizu believes she’s the one being immature about this, and that there’s nothing wrong with a boy she likes admiring her chest. Nariyuki is a half-beat too late in their conversation to clear things up, as Rizu finally offers to let him touch them “for only a second” just as her beastly father arrives at their booth. 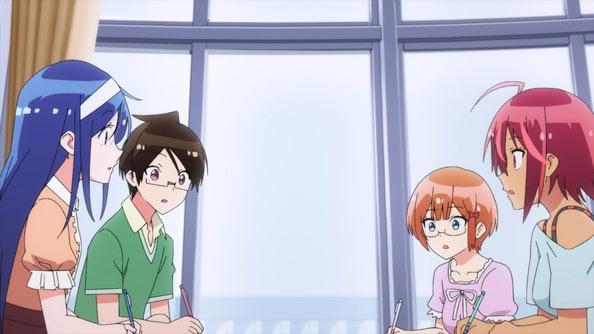 The next segment involves Nariyuki in a group study session at a cram camp called “the Getting Inn” (not suggestive at all!) with his three tutees plus Asumi, when Fumino accidentally slips up and calls him by his given name, like she did when they had to get a hotel room together and pretended to be siblings.

Rather than reprimand Fumino (or think a little longer about why she called him Nariyuki), Takemoto Uruka wants in, and won’t respond to Nariyuki until he calls her Uruka. She also insists Rizu start calling her Uruka. As with Fumino going back to Yuiga before slipping up here, who knows if the given name-calling will continue, but the fact it’s not an unthinkable concept shows growth among the friends.

Things get a lot more intimate between Nariyuki when his three primary tutees when they head into the hot spring bath early, just before the men and women signs are changed. When Nariyuki heads in, he believes, correctly, that he’s in the men’s bath when he encounters a nude Fumino washing her hair.

Once the three realize they’re in the wrong, they prepare to skink away, but are blocked by the arrival of three more boys who most certainly are horndogs. Thankfully, they’re sufficiently distracted by their own attempts to widen the bamboo in order see into the women’s bath that the girls are able to escape into the steam, while Asumi on the other side jabs her fingers into one of the peeping tom’s eyes.

Once everyone is dressed, the girls thank Nariyuki for being a gentleman about things, but he must torpedo the goodwill by presenting Fumino with the bra she left in the changing area. The implication is that he knew it was hers due to the cup size, expressed through a very unexpected but appreciated parody of the touching ending shot of Nausicaä of the Valley of the Wind.

“Seiren” means “honest” in Japanese, and I said in my first review that it’s a pretty honest show. Sure weird things may happen like a soaked Hikari climbing into Shou’s window, but there’s a logical explanation for it, however far-fetched.

More importantly, the show is honest about how Shou, from whose POV we’re watching most of the time, has no idea what to make of Hikari. Does he like her, or is he just reacting as programmed due to her popular princess status at school? Does she like him, or is she just messing with him in lieu of any other suitable boy at the hotel?

Shou’s only at the study camp at all because Hikari inspired him to improve himself. He finds it hard to balance the need to actually study with the nervous but exhilarating fun he has whenever Hikari is around, being so “provocative” at least for a conservative chap like him.

This week Hikari gets Shou to cut loose, wearing the wrap that came with her bikini as they sneak into the boy’s bath after hours for a dip. Here the honesty is carried through: they don’t get intimate or anything; Shou is nowhere near that stage. But he does find out exactly what it’s like to have an illicit bath with a pretty girl, and the resulting tent he pitches comes in handy when scaring off the teacher, saving Hikari from being discovered.

Be it studying in his room with Hikari on his bed, sneaking into the bath, or sharing a nice night outside (finally, they went outside!) by a drained pool, Shou stocks up on lots of nice memories with this girl he can’t quite figure out, but is trying to do so.

He feels it’s the proper time to ask her why she lied about the mixer being a “family affair”, but she claims she wasn’t lying, as it could potentially lead to her making a family. He also learns the older man at the restaruant was never her boyfriend.

And while she had a fair amount of fun with Shou in the mountains, Hikari still seems sore about missing the mixer, particularly when her friend says “it wasn’t anything special” but is then seen back at school hanging off the arm of Araki.

Meanwhile, Hikari and Shou haven’t talked since that memorable night at the inn. He feels a rift of sorts was formed when he delved into her personal life, like he’s on the outside, looking in; unsure how to re-engage with her.