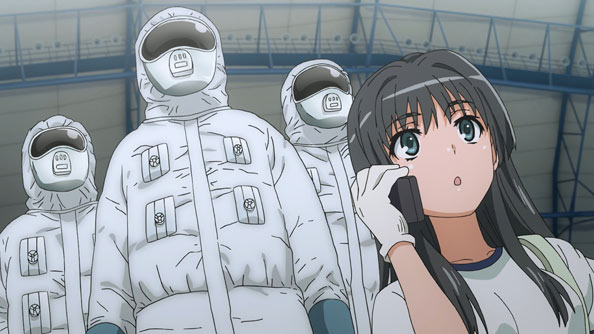 Saten’s quest to find Shadow Metal hits a dead end with a dull thud when she’s caught snooping by ominous men in isolation suits. Misaka and Kuroko teleport to her and zap the men, but it’s all a misunderstanding: they’re a deep-cleaning crew responsible for preventing the illegal acquisition of esper DNA. The girls were the ones who were somewhere they shouldn’t have been.

I doubt that’s the end of Saten’s search for the semi-mythical metal. But it may be a while before it’s mentioned again, at least not until after a brutal cascade of events that end up all but burying Misaka are dealt with. Before that, however, the quartet finds a prime viewing spot for the nightly Daihesai fireworks display. I didn’t know it would be the last time for a while that the four are together as friends! 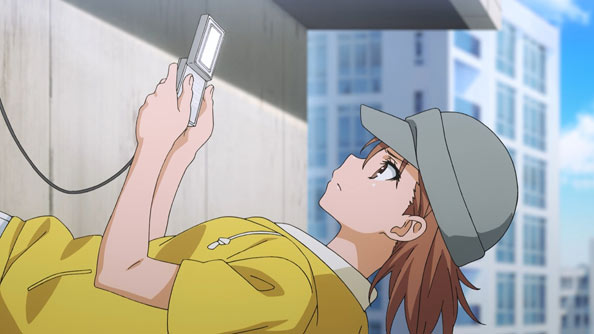 The next day, Wannai meekly asks Misaka for her gym clothes back, and Misaka realizes MISAKA never gave them back. With no events on her schedule, she uses her free time to fly around the city checking cameras for signs of MISAKA’s whereabouts. That leads her to two ambulance drivers she eventually suspects to be under Shokuhou’s influence. 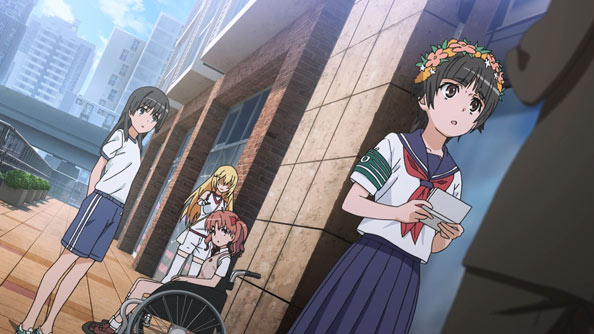 Frustrated over her lack of progress in finding MISAKA and unwilling to reveal the secret of the Sisters, Misaka loses her temper and nearly assaults one of the drivers, leading to a confrontation with Antiskill and a punitive ride back to school and lecture about comporting herself properly from Headmistress Watanabe. Meanwhile, Kuroko, Uiharu and Saten are all “paused” by Shokuhou’s remote when her accomplice distracts them.

Due in part to Misaka’s own actions and loss of her cool, Watanabe assigns members of Shokuhou’s clique to “keep an eye on her” henchforth. One of the members is a telepath who can track Misaka wherever she goes. She may be a more powerful esper than any one of them, but all of them will be tougher, especially when she has to try to undertake a coherent investigation.

The last straw is when she encounters her three best friends…and they have no idea who she is. You do NOT mess with Misaka’s friends. Now no matter what Shokuhou says or does from here on out, we can be assured she’ll be on the end of some shocking retribution. Misaka also still has a few allies not yet under Shokuhou’s web of control. Fun-and-games time is officially over.