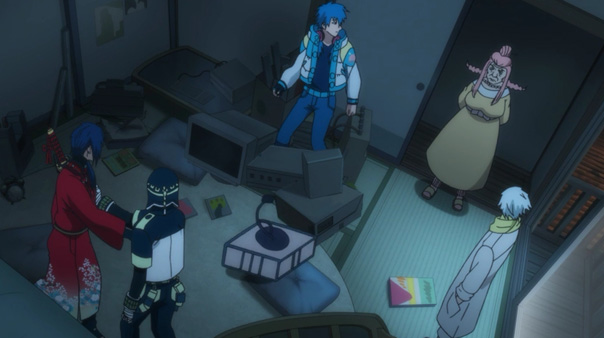 The past Aoba doesn’t even remember having is catching up with him, as a former Rhyme playmate of his pays him a visit. Noiz’s first visit to the junk shop is uneventful, minus a few weird stares. Then Aoba finds him in his room on his computer. Noiz wants to play Rhyme with Aoba again. If Aoba refuses, he’ll do something terrible to Ren. Hey, WHOA. LEAVE REN ALONE, you spiky bastard! 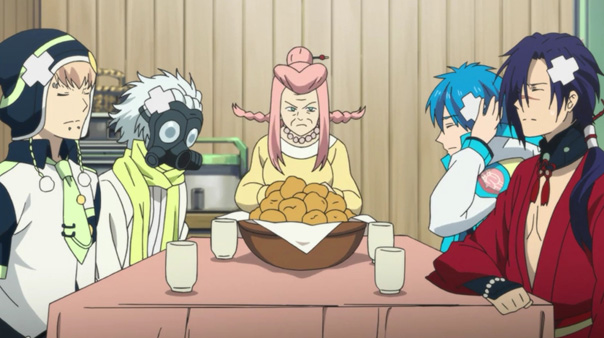 Just then, Clear bursts into Aoba’s room, and Koujaku right after that, and suddenly it’s really crowded in there, with blood about to go on the boil. Noiz and Koujaku make a mess of the place with their rough-housing. Aoba and his Grams are able to calm the crowd with tea and biscuits (or something), but it’s clear Aoba isn’t about to have a Noiz-less future from here on in. 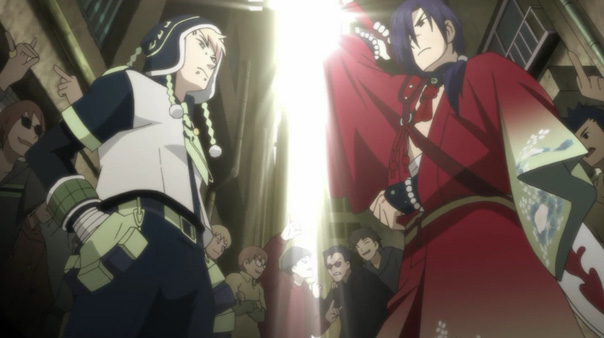 The next day, Koujaku and Aoba visit Mizuki, who has been noticeably down of late (I forget the details). I’m thinking it was the voice actors laying the friendly sarcasm on a bit thick, but they have what sounds like a very stiff, almost forced conversation, perhaps reflecting the disquiet lurking just beneath their easy smiles. 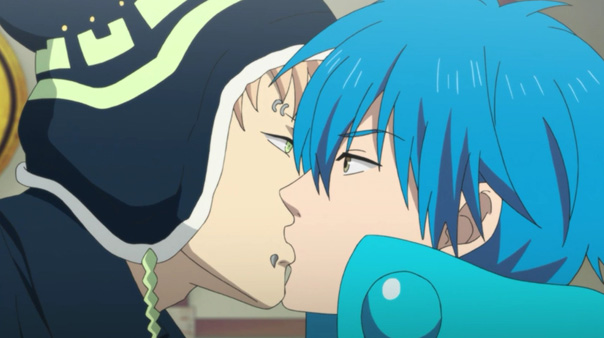 Speaking of tongues, Noiz returns to Aoba’s shop, this time dispatching the three kids who are always bothering Aoba, grabbing the girl by the scruff and kissing her hand, telling her “Rowdy girls aren’t cute.” Hey, who asked you, pal? That’s a matter of opinion! When the kids scurry off and Aoba mentions the inappropriateness of the kiss…Noiz kisses him. 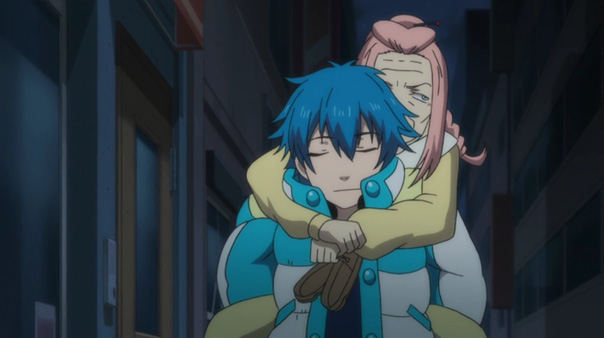 Was he trying to trigger Aoba’s lost memories? Did they have a thing? Aoba is drawn away by news his Grams is in trouble, but it was just her back giving out. He carries her home and she goes in her room…then before the credits roll we see another Grams in the back of a Rolls-Royce, with the driver saying “So he was alive.” A doppelgramser? Okay, Dmmd: I’ll bite. But damn, the animation quality was poor this week!

With most of the characters introduced, the plot gets a chance to thicken this week, as a mystery surrounds Aoba and Ren’s impromptu trip to Rhyme, and none of his elaborately-dressed buds can shed any light on it. There’s a ton of questions asked, but its slim pickings, answer-wise, which combined with the leisurely pace of this episode, made it more of a drag than the first. 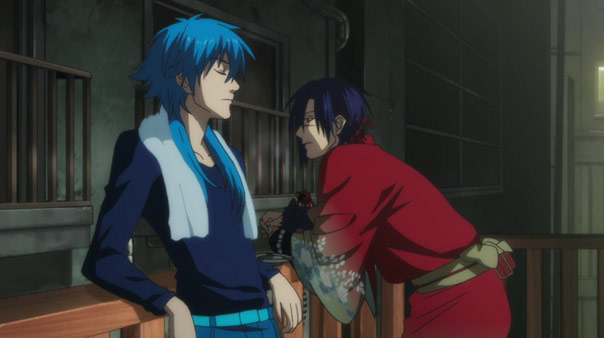 The entire first half consists of a rehash of the Rhyme battle with that annoying bunny thing, which I really didn’t need to see again. Turns out the outdated Ren’s initial attacks are no match for the foe, but Aoba instinctively busts out some kind of orders that win the day. He wakes up where he passed out, is excused from work, and goes home to rest and repair his Allmate. Things are very slice-of-lifey.

That’s not a lot an awful of ground covered, by the standards of some of the better-paced shows out there, but it’s also arguably admirable the show is still keeping its cards close, preferring to show Aoba interacting with his friends and grams more and let subtle clues trickle out one by one. It’s obvious, for instance, that Aoba has played Rhyme before; he even has a handle: “Sly Blue.” The popularity of Rhyme is also sapping the ranks of real-world gangs.

But due to an unspecified “accident” a while back, Aoba’s memories must have been messed with, the same way the data in Ren was damaged. He also must have been a player of no small accomplishment, since he not only seems to have some antagonist on his trail, but also has an apparent fan who reverently calls him “master”—that’s Clear, the gas-masked fellow we thought was behind that first battle but turned out not to be. In any case, Aoba’s a popular guy right now, and there’s a lot more to him than even he knows.

Averting mediocrity has been a recurring theme of Barakamon, and this week it applies not only to Seishuu’s efforts to re-capture the spur-of-the-moment lightning in a bottle style he awakened in a fit of passion, but also to the village chief’s son Hiroshi, who received all “3’s” in his school marks and has a tendency to half-ass things. 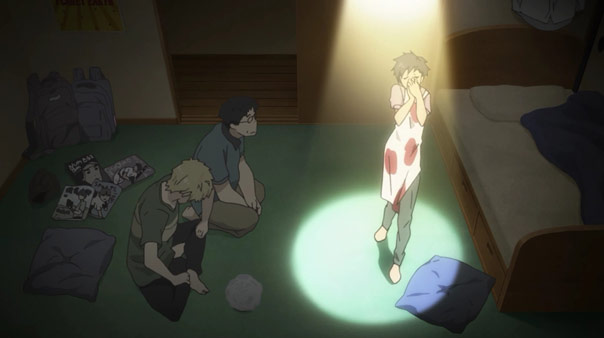 First, Seishuu. Those efforts of his are running him ragged; causing him stress and insomnia, and not helped by the summer heat and the fact he can’t cook. Then, when trying to focus, his tranquil environment is invaded not just by Naru (who is less the focus this week and more of an enabler/go-between to the schoolgirls we saw sneaking out of his place last week, Miwa and Tamako. 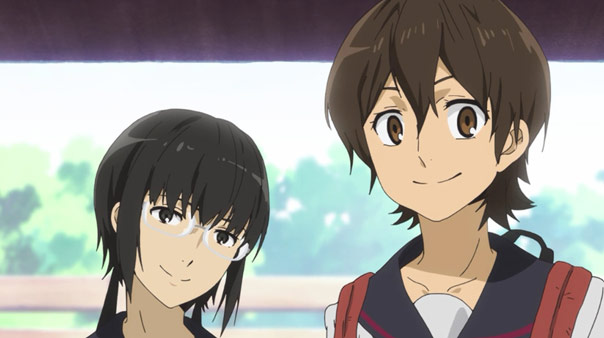 The girls only compound the disruption to Seishuu’s concentration Naru is usually responsible for, moving back in to their “base” and bothering him at every turn. They do inspire/drive him into rendering another bold, passionate piece in a moment of frustration. I particularly enjoyed their reaction to his creative lashing-out: they all think it’s amazing…but have no idea why. 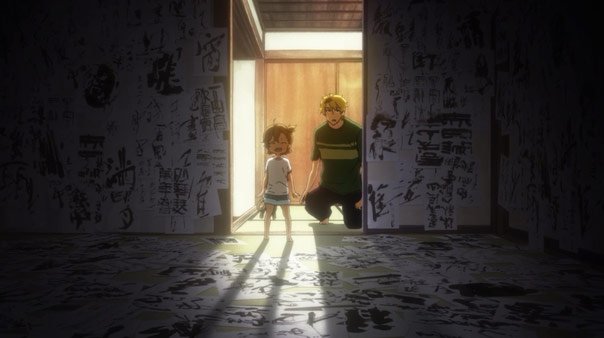 Seishuu’s poor living habits do eventually catch up to him. When Hiroshi is delivering him food his mom made (and guilt-tripped hi into delivering with an extremely dramatic monologue for a minor character), Seishuu literally collapses into his arms upon opening the front door. Yet despite his belief Seishuu’s a burden on his mom, Hiroshi is himself inspired by Seishuu’s intense, almost life-threatening effort.

Hiroshi doesn’t believe he has any talents that will net him anything higher than a three, but through Seishuu he realizes that the will to work hard can be a talent in and of itself, and he pledges to work harder. Unfortunately, Seishuu takes a turn for the worse and must be admitted to hospital, which proves to be a fresh and versatile new setting for comedy.

Even weak, in bed, and hooked up to an I.V., Naru, Miwa and Tamako don’t let up, continuing on their respective lines of interaction bordering on cruel antagonism. But intent is important, and the fact is, these people are visiting Seishuu with the best of intentions. Thanks to the hospital’s resident ghost, Seishuu grasps the truth: the girls are there because they like him and are worried about him. 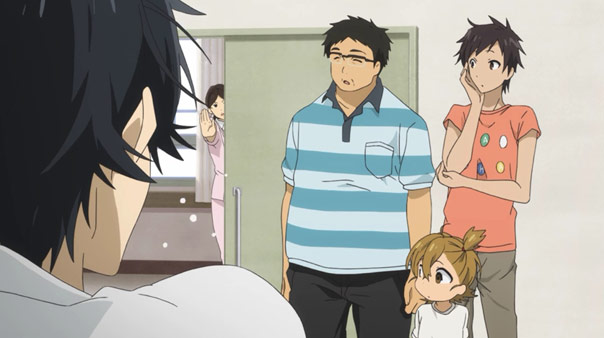 He can’t put everything he has into writing: he has to save some energy for figuring out how to endure the many forceful personalities in his life…and for sustaining that life with food, water, and sleep on occasion. Not that any of this will be easy, mind you, but at least he can count on Hiroshi’s mom continuing to feed him, saving him from cutting his hands to shreds in failed attempts at cooking!

Bodacious. Stylish. Crisp. Zany. Rad. These kinds of words swirled through my head during the OP (with a catchy theme by techno rock band GOATBED) and those descriptors served me well all the way through a very introductory episode to the ED (also a catchy theme by techno rock band GOATBED). On further research (Wikipedia) I learned this show is based on a BL visual model, which explains the lack of any female main characters, along with the reliable attractiveness of all of the male characters we come across.

The gender of the various players isn’t of much consequence in the first episode; but what is evident is that they all cultivate extremely elaborate, colorful looks; clearly a lot of effort was put into giving them very memorable, eye-popping appearances. One could even throw around the word flamboyant without fear. The setting is similarly impressive; as the protagonist Seragaki Aoba and all his pals live in the somewhat rundown”old city” (let’s say it has “character”) on an island now dominated by a massive, pristine arcology-looking thing.

We follow Aoba through a pretty typical day in which he crosses paths with many different folks, from a trio of neighborhood urchins, to his hairdresser friend Koujaku, to his gang leader friend Mizuki, two the non-twin brother yakuza duo of Trip and Virus, and finally, some big dude he bumps into who drives off on his motorcycle without a word. There’s also a kid with a gas mask on, Zvezda-style, but Aoba doesn’t run into him. The whole time, his pet Japanese Spitz Ren is by his side, who happens to be able to talk, serves as a mobile computer, and takes human form in game fields. Everyone seems to have a little mecha-animal on their person. Wish I had a mecha-animal… 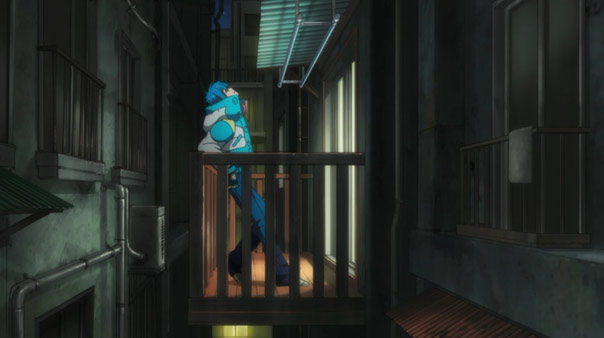 While Aoba’s clearly done a few unsavory things in his past, he seems content with a quiet, honest living at the Junk Shop “Mediocrity” and living with his battleaxe Grams. But he’s also a lad being pushed and pulled by his pals to doing something more with his life; something he’s capable of doing. The final straw comes when he’s drawn against his will into the VR combat game “Rhyme” that’s all the rage in the city. While he pleads with the guy who instigated the game that he’s never played Rhyme, he’s clearly played something before, because he uses something called a “Jubilation Set” to defeat him. 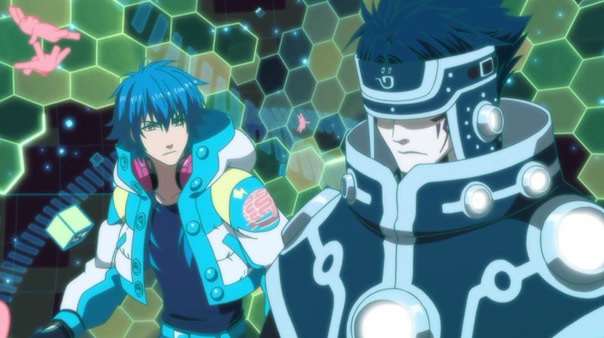 Keeping track of so many new faces on new shows is often, to borrow a word from Aoba, a “hassle”, but DMMd at least makes it easier by making them so distinctive, and there’s a nice flow to Aoba’s travels around the huge, surging city. I can’t say much about Rhyme, except that Ren looks really cool in human form and their evil bunny rabbit opponents were lame as hell. Between Grandma throwing death flags and the gas mask guy, I’d bed on Aoba’s quiet, unassuming life getting a bit louder and more assuming in episodes to come. And by all means, keep rockin’ those moon boots.