Ah, the seaside. Warm breeze, giant sunfish, sea otter meat, and…swarms of locusts?! Golden Kamuy brings a lot of people together, but then immediately splits them apart, both with the swarm, and with sudden clashing stories about who is dangerous and who is (still) working for Tsurumi.

According to Inkarmat, Nopperabo they’re seeking isn’t her father at all. Her father is a man named Wilk, whom Inkarmat befriended and even fell for (though he only regarded her as a child). Wilk, Inkarmat tells her, was murdered by his best friend…Kiroranke.

That night, just as the others are coming down from the sea otter, Inkarmat mounts Tanigaki and disrobes. While there are any number of reasons she decided to sleep with him (including genuine attraction, which is definitely there) she later attributes the lay with the sea otter’s legendary aphrodisiac effects.

Once everyone is reassembled on the beach, Asirpa immediately confronts Kiroranke with what Inkarmat just told her. When Kiroranke plays innocent, Inkarmat produces evidence in the form of fingerprint matching.

Then Ogata draws his rifle on her, accusing her of working for Tsurumi, but she says she was only using Tsurumi. Tanigaki puts himself between Inkarmat and Ogata’s gun, and Ogata accuses him of letting himself be seduced.

He tells everyone that their mission remains the same: go to Abashiri and meet with Nopperabo for answers. He half-jokingly warns that whoever “makes their move”, resulting in another member of the group suddenly meeting their maker, will share the fate of their victim. Call it Mutually Assured Justice. 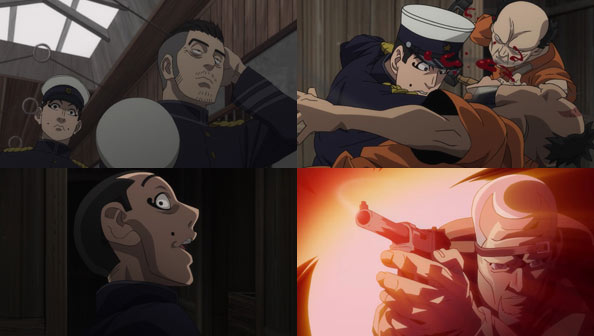 Tsurumi’s intel network is formidable, and he is informed the moment the reunited group is headed to the prison. He even has a mole there, posing as a greenhorn noob. His superior officer is ordered by the warden to “feed him to the pigs” when his duplicity is uncovered, but the young lad make quick work of the two inmates who ambush him. Looks like our friends are heading straight into a hornet’s nest. What else is new?

As for the post-credits sequence in which a wagon is robbed in the night by a crack shot with a pistol…not enough info to form an opinion one way or another, except to assume the able gunman in question will probably cross paths with either Tsurumi, Hijikata, or Sugimoto & Co.

Kazusa and Haruki go to his apartment and make love. The next morning, Kazusa leaves early with his jacket buttons. Setsuna arrives to find a guilty, dejected Haruki, but insists they see Kazusa off. On the N’ex Haruki tells her everything, but to his shock she’s not mad, knowing full well Kazusa and Haruki’s feelings for one another. Setsuna says she only asked him out so the three of them could remain together longer. At the airport, Haruki is about to leave when Kazusa finds them both. Kazusa and Haruki embrace tearfully before she leaves for Vienna. Haruki tells Setsuna she should go, but she stays with him as the snow falls.

We haven’t been on the N’ex enough times to know if conversations of the type Haruki and Setsuna had on it are a common occurrence, but if they are, the conductors must have some stories to tell. Still, the talk Haruki and Setsuna had was something that had to happen, and part of why the second White Album came to a very strong close is that things that had to happen happened, leaving nothing left on the table. Kazusa and Haruki have their (tastefully edited) passionate night together, but it’s only the one, and who knows if there’ll ever be another. After coming between them for so long, Setsuna brings the two together one last time at that airport and lets them have a proper goodbye, even if it’s painful for her to watch. But wait, not...everything is off the table, is it? With Kazusa gone fir the time being, all that remains is Haruki and Setsuna.

While she told Haruki that she liked Kazusa more than him, she didn’t mean it (and Haruki could tell she didn’t). The trio who had so much silly fun together may be no more, but the two of them remain. If you’ll indulge us, we’re reminded of Monogatari’s Kaiki’s talk about there being “no peerless person”, and that “nothing (or no one) is irreplaceable.” In Vienna, Kazusa will repair her bond with her mother and fulfill her musical dreams. Would we have liked to see Haruki jump on a plane after her? Sure, but he may be just as “useless” there as Kazusa would be remaining in Tokyo. People can move on, and because of that, there may still be hope for Setsuna (she’s there, after all). But Haruki and Kazusa were awfully in love with each other here. They may find themselves apart for now, but we see no reason why that arrangement should be permanent.

The three of them may never be as happy as they were on that stage at the school fair, but the future may yet hold happier times for at least two of them.