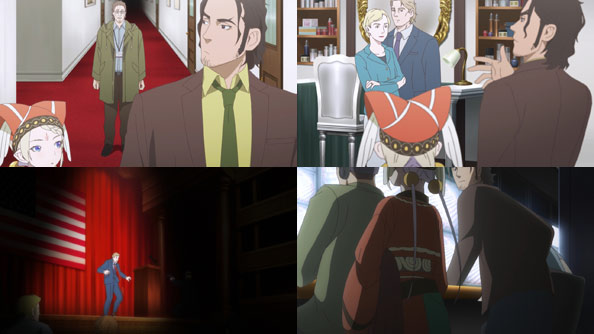 On the way to an interview with Coal Mozeleemay, Kei is stopped by the reporter Kevin Randall, but insists he has no comment. In their meeting with Coal (definitely awkward due to his last encounter with Tilarna), he has no comment either, as his wife Marla handles all the questions, confirming to Tilarna that he’s no leader.

Turns out he’ll never have a chance to prove Tilarna wrong, as he’s shot during a speech. Kei pares down 92 potential suspects in the crowd down to three by eliminating anyone not acting like an assassin would, showing Tilarna that Kei’s pretty good at this detective stuff when all’s said and done.

Unfortunately for both of them, the black suit-wearing culprit won’t surrender or come with them without a lengthy chase, during which he demonstrates superhuman speed, agility, strength, and an uncanny ability to shrug off multiple gunshot wounds.

Again predicting he’d require more agility than a full-size car, Kei commandeers a tiny, quirky Messerschmitt KR200, which is naturally abused and badly damaged in the dust-up with the perp.

Kei and Tilarna have no choice but to put the guy down by whatever means, but before he dies, his appearance completely changes, revealing he wasn’t Semanian at all, but a human soldier using Semani magic. His gun was also disguised as a camera, made of ridiculously precise Vaifaht steel Tilarna claims even the best smiths back home couldn’t come close to creating.

So on one hand we have two dead candidates, and the only one left standing is in favor of kicking out all “aliens,” and on the other you have a highly-trained human soldier using immensely sophisticated magics in order to make it look like a Semanian killed his own.

Chief Zimmer instructs Kei and Tilarna to interview Tourte next; we’ll see if he knows anything about this apparent human-led conspiracy to make him the next mayor, which could well lead to the expulsion of all Semanians, many of whom might not go without a fight—either legal or physical.

Meanwhile all these murders of candidates have the public on edge, and well-organized anti-Semani demonstrations are already underway. Whether they popped up organically due to fear or something arranged by pro-Tourte partisans, we shall see, but in the meantime Kei urges Tilarna to keep her cool, even if what’s going on is both unjust and undemocratic.