Pitohui seemed to be talking a bigger game than of that which she would’ve been capable last week, but she holds true to her avatar name, killing everyone she touches (and quite a few she doesn’t) taking out over twenty of the nearly thirty allied opponents all by herself. The episode is called “ten-minute massacre” but her work doesn’t even take that long, and just like that, seven teams and their leaders are taken out, thinning the SJ2 field considerably. 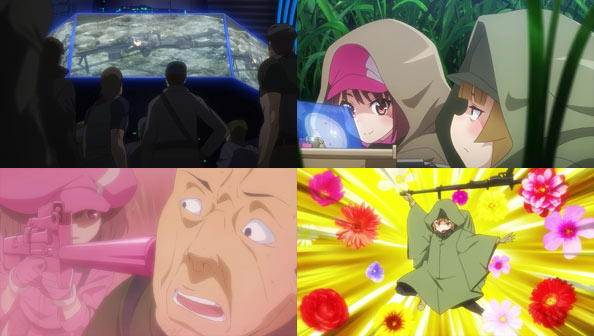 With the number of teams holding Pito and M’s attention dwindling fast, LLENN takes a safe and stealthy route to them through the inside of the Dome, which has a savannah theme of high grass perfect for hiding, especially if you’re tiny like LLENN and Fuka.

When their position is suddenly exposed, they use speed, pink smoke grenades, and a silencer on P-chan to defeat their foes. Fuka gets a bit too cocky and ends up emptying a clip from her handgun without hitting her target, but she draws from her fantasy RPG background to blugeon the guy to death with a rifle.

Throughout SJ2, we’ve gotten color commentary from the peanut gallery, which is a bit tiresome considering how misogynstic many of their comments are. However, I’m willing to tolerate it to a degree because this is, after all, meant to be a Boy’s/Man’s Game with women players seen as upstart outsiders.

In the cases of Pito, LLENN and Fuka, they’re showing they can not only hang with the boys, but dominate. Speaking of women dominating, “Sinon”, AKA Asada Shino, is mentioned as having cleaned up at the last BoB.

We meet a new woman character in Clarence who LLENN and Fuka initially believe to be just another lecherous dude, albeit a more androgynous one. Turns out she’s a pansexual woman IRL and wants to meet them both. LLENN just wants her magazines, since they’re compatable with P-chan.

She agrees to a kiss (a peck on the cheek) in exchange for the ammo and Clarence’s resignation. She gets both, but they’ve been chatting so long a team has manages to sneak right up to them and initiate an ambush. That team is MMTM, one of the contenders for the SJ2 win, which means LLENN will need every one of the bullets she got from Clarence (who promptly dies) as well as the hope she won’t run out of her famous good GGO luck.