Another day in the life of GANGSTAs reveals new details about Worick (formerly Wallace) Arcangelo and his partner (formerly his bodyguard). Notably, Worick wouldn’t make a bad detective, owing to his preternatural talent for memorization. Chad, who’s known these men since they were 17-year-old boys, periodically brings them in to appease the higher-ups, but makes use of Worick’s skills in identifying some suspiciously cleanly carved-up bodies.

As far as the present-day goings-on, Ally continues to wring her hands over whether to stay or go (knowing the last girl who lived with the Handymen almost died) and one of their clients, Danny Monroe, and his men end up in a spot of trouble with a kukri enthusiast. Those events are punctuated by flashbacks going back to the day Wallace met Nicolas. Back then, Wally could basically read any book in a minute, and grew bored and restless with his education and stifling living situation.

When he learned Nic was deaf, he felt insulted to have a “defective” guard, but at the same time, Nic gives off an irresistible aura of wildness and freedom (even if Nic is far from free). We also learn more about the “Twilights” and why they’re called that: as the victims (or children of victims) of combat doping gone wrong. 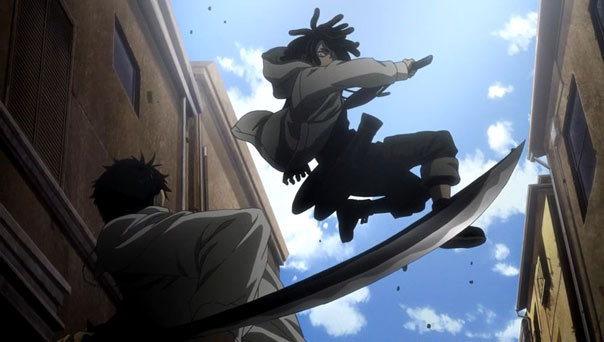 Whatever the case ends up being, the two seem pretty tight in the present, as both professional partners and brothers of a kind. These scenes also bring up the question: did Nic just snap and kill Wally’s fam and take his eye…or did Wally ask him to blow up his life? There are still key gaps in their backstory, but the show is doling them out at a pretty good clip, and with Nic facing off against a fellow “A/0” ranked Twilight (and a sprightly one at that), I wouldn’t be surprised if Worick will lend a hand next week. 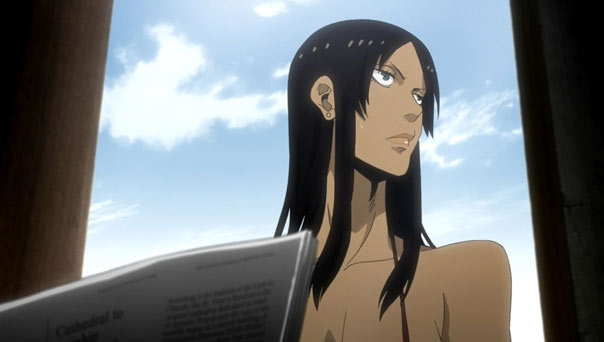 GANGSTA’s first two episodes were anchored by big confrontations with Bad Guys, or at least people who are darker grey than our lead guys Worick and Nic, but this week is more of a Day-in-the-Life-in-Ergastulum affair as we shadow Ally as she helps out with deliveries of Dr. Theo’s drugs throughout the town. In the process, she learns a lot more about the town she apparently didn’t know too well before, and much more about her two employers; almost more than she probably wanted to know. 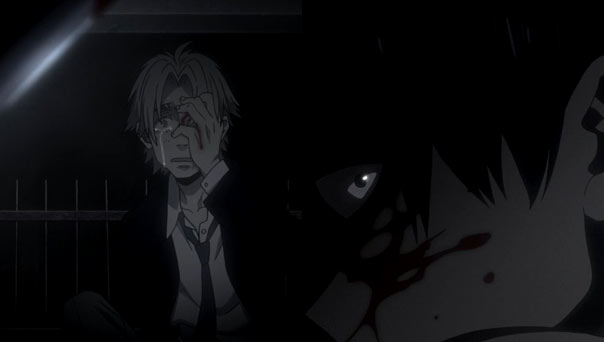 But before that, we get a glimpse into Woricks (likely periodic) dreams in which he relives the night he met Nic: when Nic came to murder his family and stab his eye out back when he was thirteen. This puts their relationship in an entirely new light, introducing the possibility that Worick could be long-suffering Stockholm victim who simply went with the flow of where events took him. 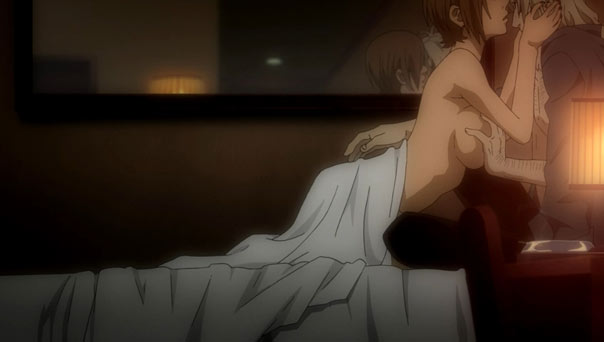 Worick shoos Ally out along with Nic because he has a lady caller; apparently one of his many jobs is gigolo, and apparently a well-regarded one as his client seems pretty well-off and discriminating (she also drives an old Jag…or is that an Alfa?)

It makes sense that he wouldn’t want to upset clients by having another woman around his pad…but perhaps he also didn’t want to make a federal case out of his other job to Ally, and would rather she figure it out organically from clues and the words of others.

He eventually joins up with Nic and Ally. The latter gets to witness a variety of Ergastulum happenings, like a mobster trying to win Nic back into the fold (saying he can bring Worick along too) while disposing of bodies. They also visit a brothel where Worick once worked (and likely learned his trade after his kidnapping by Nic), where the madame treats him with some degree of maternal tenderness.

Dr. Theo’s drugs are for a very ill woman who doesn’t seem to be getting better; someone Nic seems close to. Ally agreed to work for the Handymen; now that the curtain is being pulled back a bit, there are still some doors that close in front of her she dare not push back open.

And that gets to the advice of the old shop woman who knows what brand of cigs Worick sent Ally out to buy for him. She tells Ally not to linger around these two chaps too long. Heck, even Worick warns her not to stay in Ergastulum too long, or she’ll be stuck there just like everyone else.

For a second, it looks like Ally takes the woman’s advice, but she doesn’t go far; just to the alley where she and Worick first met. There, she asks Worick if he ever thinks about the “why”…whether it’s why Nic killed his family and kidnapped him, or why he’s a gigolo, or a host of other whys. But all Worick can say is “good question.”

Does this life make him happy? Is he weak, or passive, or complacent? Who knows. But Ally could probably answer Worick if he asked: “Why stay?” Because where else is there to go? The way Ergastulum is presented to us, there may as well be an empty void beyond its walls. Something is better than nothing, and the knowable and inscrutable are less frightening than the unknown.