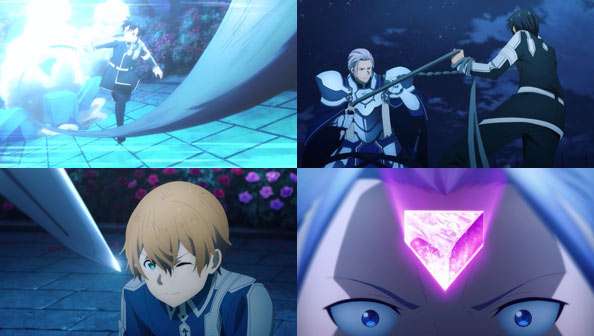 Kirito and Eugeo just barely hold their own against Eldrie Synthesis Thirty-One, who is armed with all manner of magical attacks and divine objects. They’re only able to escape defeat when Eugeo suddenly remembers why Eldrie seems so familiar: he used to be Eldrie Woolsburg, the North Empire representative swordsman.

Hearing his former name and other details of his past, a triangular prism is slowly ejected from his forehead, and the former Eldrie’s personality seems to return. The transformation is interrupted by an attack by a second knight armed with a bow and riding a dragon, but the implication is clear: what happened to this guy must’ve happened to Alice. The person she used to be might not be gone; only repressed.

Kirito and Eugeo would have probably eventually been caught by the second knight, but are given yet another break when a voice tells Kirito which way to turn and presents them with a glowing secret doorway through which to dive.

They land at the bottom of a stair, before a diminutive-looking sage called Cardinal. She is the Cardinal System that once governed the Underworld, but she’s been usurped, and her powers are now limited to the great library that contains all of the world’s knowledge and history.

Upon showing the boys around, she sends a sneezing, soaked Eugeo off to the bath to warm up, and summons some food and tea for Kirito. The balance of the episode is Cardinal (voiced, I think, by Tange Sakura, complete with “umus”) basically delivering a lengthy infodump, focusing on her “twin elder sister”, Administrator, the self-made Pontifex of the Axiom Church and only one who can contact the outside world.

“Administrator” was once Quinella, the offspring of the first political marriage between high lords, and the descendant of one of the “original four” inhabitants of Underworld who, unlike the other three, was driven by greed and a lust for power. Quinella was gifted with System Call, and used it to hunt animals and gain more and more authority.

Eventually, she had her followers, upon whom she demonstrated various “miracles”, build her a church in which she still resides to this day, being worshiped and ruling with absolute authority. She solidified that authority by writing the Taboo Index, which forbade the very actions that gave her the power boost she needed to seize command of the world.

Even Quinella couldn’t initially win against the ravages of time, but even on her death bed never stopped trying to find the right commands to undo her demise. She succeeded, either due to coincidence or help from the outside world, and her fluctlight was augmented with the Cardinal System as it was to create a new, no longer “human” being, naming herself “Administrator.”

Suffice it to say, Admin is one tough cookie. Considering how badly Kirito fared against a novice Integrity Knight, he and Eugeo are going to have to seriously up their game if they want to overthrow her. I daresay it wouldn’t hurt to snap Alice out of her brainwashing (Eugeo knows far more of her past than of Eldrie’s) so she could fight beside them.

But I’m just spitballing at this point. The villain has been introduced and explained. Now we’ll see what the heroes are going do about it.

Mika screwed up, in part because he put everything on his shoulders. His plan to free his family, which was more than fine going along with it, ended up killing them all except for Yuu. Mika himself would have bled out, were it not for the intervention of Krul Tepes, Loli Vampire Queen, offering him, nay, forcing upon him, her blood.

Now he’s a vampire, and the pain and guilt could stay with him for centuries, potentially twisting him into a wretch. Yet he still carries out his duties alone, eliciting resentment form his vamp peers but gratitude from a single girl he saved from a monster, who gladly offers her blood to him as thanks. Once his escape plan failed he had no choice in becoming a vampire (Tepes wouldn’t let him die), but he can choose what kind of vampire to be. It’s a choice that’s perhaps lost on someone so racked with guilt.

From checking in on Vampire Mikaela the episode segues to Yuu and Yoichi transferring to the Moon Demon class, where he makes the most ridiculous overbaked shonen speech possible about not being there to make friends and declaring he’ll get the best gear. His seat happens to be positioned right in front of that of Kimizuki Shiho, the dude who picked a fight with him earlier to test his ability.

And so we have our two arrogant, hotheaded rivals who both have something to learn from one another and will become tentative pals by the end of the episode through greater understanding of where they’re coming from. If this sounds somewhat rote, it’s because it is; nothing out of the blue here.

Like Yuu, Shiho lusts for power…all of the power, though not for revenge, but to save his sister, who is dying from the Apocalypse virus. But Guren warns him, with demonic visual aids, no less, that Shiho can’t go anywhere near cursed gear as long as that lust for power drives him. Like Yuu, Guren needs him to make friends and learn to rely on the strength of others. Going it alone won’t end well for anyone.

Shinoa fixes it so at their first major evaluation, Yuu and Shiho are paired up. Predictably, they try rushing in opposite directions despite the fact they’re handcuffed to each other. Seriously is their mutual lust for ultimate power so strong, it affects their basic understanding of the physical limitations of handcuffs?

Apparently, but they don’t get to demonstrate just how badly they fight together, because word comes Shiho’s sister has taken a turn for the worse. Suddenly understanding why Shiho is so gung ho about beating him, Yuu insists, with prejudice, that they go to the hospital. Being with his family is more important than the evaluation.

Shiho relents and goes, and doesn’t regret it. His sister pulls through, but the doctors warn regular medical equipment will only keep her alive so long. The military has tech that might be able to cure her, but the military, like society, is transactional: if Shiho wants that tech, he’ll have to distinguish himself in the Moon Demon Squad.

Yuu, jerk that he is, still won’t back down on claiming the best demon gear the army has to offer, but he won’t stop Shiho from taking the second-best, now that he understands what Shiho is fighting for. Both guys failed the evaluaiton, but while Shiho feels defeated, Yuu tells him it’s no time to give up. He’s going to do everything he can to avenge his family, regardless of evaluation scores or moon squads. He expects Shiho to do no less to save his sister.

Mind you, I’m not sure the lesson about teamwork has quite stuck, since both seem dug into their own separate aspirational trenches, but the seeds of a alliance or possible friendship were certainly sown. 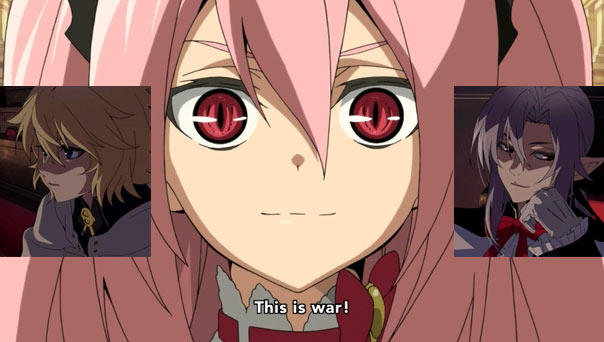 That’s good, because Yuu and Shiho can ill afford to stay ineligible for handling cursed gear. They need to get into good fighting shape soon, because Tepes has formally declared war on the humans who would organize into armies to oppose them. A rancher wouldn’t let thier cows join a union barring slaughter, now would they?

As for Mika, he’s determined to “rescue” Yuu, and while I’m not sure what that entails, if he’s planning on loading everything back on his shoulders once again, he hasn’t learned much. As repugnant as Ferid is, he could be a valuable ally against Tepes, the mutual thorn in their side.