Koguma notes how it’s been a few days since her “life of emptiness” was suddenly filled by her Cub, and then by a fellow Cub rider. She acquired the Cub by actively visiting a dealership, while befriending Reiko happened more by chance when Reiko approached her. Koguma is gradually getting more comfortable with both of these things.

During lunch (the running gag of Koguma never being able to microwave her meals is great and very relatable) Reiko announces her intention to go touring during summer vacation, and is glad to have the big luggage box that comes with the Postal Cub. Koguma would like one too, so Reiko reaches out to a fellow Cubber and finds another box within walking distance.

Reiko has Koguma remove the box from the worn-out Cub, and using tools on a Cub for the first time must feel satisfying. That feeling is repeated when a teacher gives her a free front basket from his Cub he doesn’t need anymore. As she vicariously revels in Koguma grinning like a goofball, Reiko tells Koguma that whenever she needs a part of something, the universe will provide if you “call out” to it.

As Koguma tries opening up the pipes on her Cub, she learns she’ll have to call out for something else: a means of blocking the wind from hitting her face. I must say these three episodes have been an absolute face clinic, and Koguma’s wind-in-her-face face is as priceless as her satisfied grins. It’s great watching Koguma discover the simple but powerful joy of upgrades. 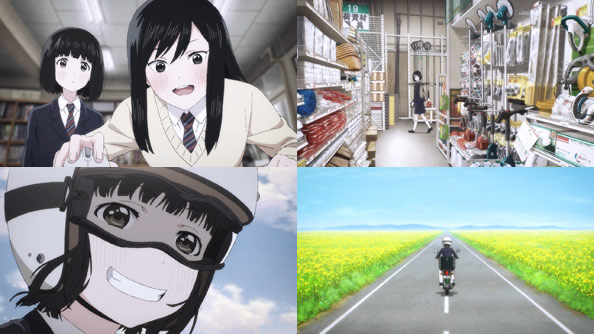 That night, Koguma considers how to solve this problem as she cooks a dinner of fried rice—not a microwave packet—perhaps indicating she’s taking more pride in the process and effort of all things, not just her Cub. Reiko takes Koguma to the library to search the web for a face shield, but even the cheapest are around $40.

Then, as if the universe were answering Koguma’s call for an alternative, she spots a custodian wearing safety goggles, which are both cheaper than a mask and tough enough to withstand the rigors of riding. Koguma had to go to the hardware store to buy a chain lock anyway, so kills two birds with one stone. Goofy grinning ensues, and that night Koguma dreams of riding her Cub on a road through a flower-strewn meadow. She’s officially got the Cub Bug.

Koguma’s mood extends into the morning, and Reiko notices her friend’s extra pep. After school, both of them want to go riding, so they do, although I was a little confused when Reiko left first, because I thought they intended to ride together. Another time, perhaps. In the meantime, Reiko gives Koguma her cell number, tells her to call if she needs anything, and to be careful on the road.

Koguma admits that getting her licesne wasn’t a particularly emotional moment, but getting Reiko’s number was another thing entirely. She isn’t sure yet if she and Reiko could be classified as friends, but that doesn’t matter, because they’re something she considers deeper and more profound: they’re both members of that ancient and noble tribe of Honda Cub owners, and they are legion!