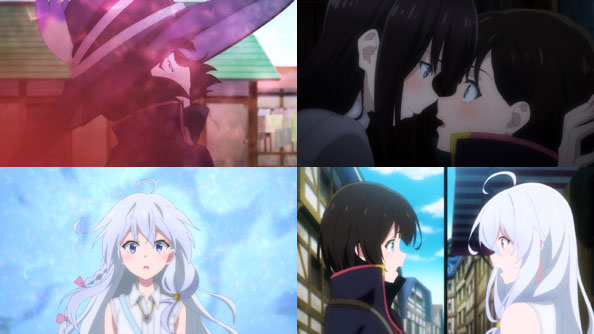 Elaina arrives in Qunorts to find that the Curio Company from the Niké stories has been revived. Townsfolk say mages are once again at risk, so she dresses like an ordinary, non-magical traveler to avoid any hassle. However, it’s because she appears to be a random NPC that she is targeted by Curio.

Specifically, Curio’s aged leader shoots both Elaina and the newly-arrived Saya with balls of magical dust that cause them to swap bodies. Elaina opens the mystery box Saya was delivering on behalf of the Association, and a massive cloud of love potion spreads across the town, causing the complex situation of Saya’s little sister Mina falling madly in love with Saya while Elaina is in Saya’s body. 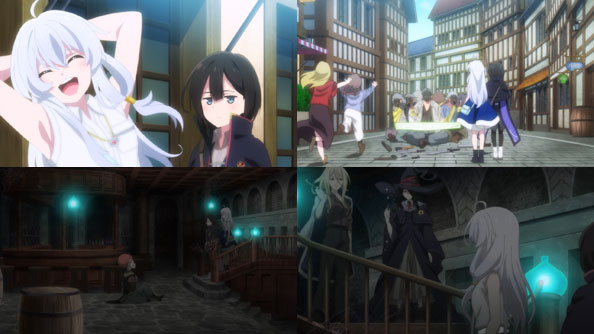 Much hilarity ensues, and both Hondo Kaede and Kurosawa Tomoyo demonstrate their talent by wonderfully mimicking the voice styles of Saya and Elaina while in opposite bodies. Having been caught in the love cloud while looking at the reflection of Elaina, Saya is even more in love with her senpai, while Elaina in Saya’s body is decidedly Not Amused.

Fortunately, the Curio Company’s grand plan was as sloppy as it was dependent on numerous suppositions to succeed, and because Elaina is a witch, she and Saya have no problem rounding up the company before they can cause too much damage. When the captured leader gloats about dozens of her cohorts still out there, Fran and Sheila finally make their appearance, having mopped up the remaining bandits. 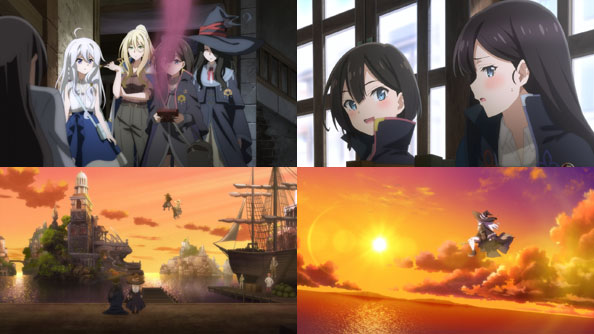 The love potion is returned to the box, while Elaina, Saya, and Mina eventually return to normal. Sheila reveals she’s Mina’s teacher too, and the one who forced Mina and Saya apart lest they fall into a codependent spiral. Saya for one is glad Mina loves her so much, while an embarrassed Mina would prefer if the subject were changed.

One subject that doesn’t come up is whether Elaina is aware that Niké and her mother are one and the same. This latest adventure in Qunorts should have provided all the clues she’d need to make that determination, yet when the four witches part ways, she remains coy about the revelation. Elaina promises Fran that she’ll return home to see her parents at some point, but as Niké had five volumes of adventures, she remains committed to writing at least six of her own.

That means a lot more traveling and a lot more situations, both fun and trying. As to the latter kind, I was disappointed but not particularly surprised the show swept her time travel trauma under the rug. In its place  was another fun and hopeful outing. Her closing monologue and broom ride into the sunset felt like the end of this particular volume with one episode to go, while hinting at the possibility of a second cour—something to which I certainly wouldn’t be opposed!