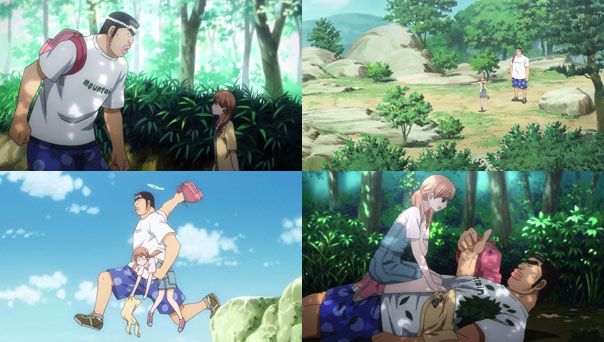 It’s another unapologetically, unrelentingly feel-good episode of My Love Story!! as Takeo and Rinko have their first big adventure as a couple. Making up for not spending her whole birthday with her, they go on a picnic to the woods, but it ends up much more of a hike, as in, up a mountain.

Ironically, it’s the very shiny and elaborate pin Takeo got for Rinko that gets them into trouble: a bird tries to steal it, and the sweater attached to it; Rinko leaps out to grab her precious gift from her boyfriend, and is about to fall off a huge sheer cliff. Takeo plucks her out of the sky, but the two end up falling all the way down to the bottom.

Do we believe he would be able to fall such a great distance on his back? Sure, why not! Especially when doing so offers such great sight gags. 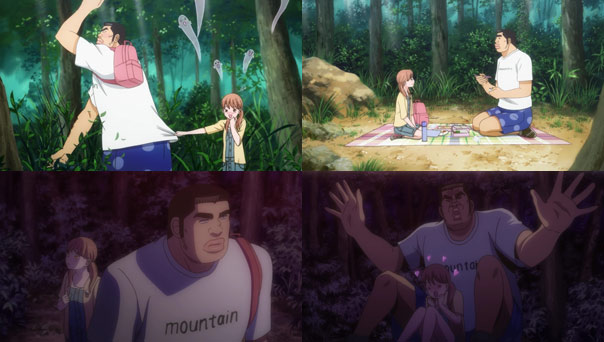 To him, the things he does for her are simply his duty as Rinko’s boyfriend. She rewards him by being cute and providing a delectable lunch. But I also like how often she assures him that she’s “all right”, she’s not going to shatter in a million pieces if Takeo isn’t careful; she’s tough too! 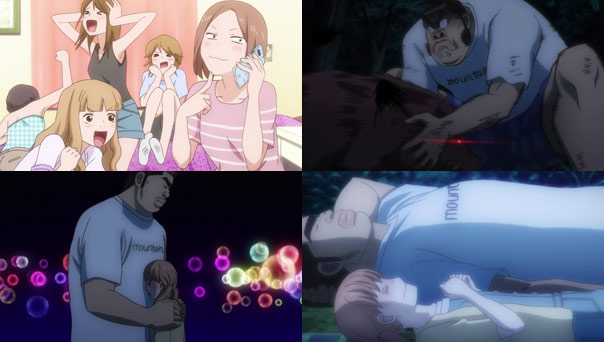 I really enjoyed the cuts to what everyone else was up to, from Takeo’s no-nonsense mom “he’ll show up eventually!” and dad (now we see where he got his rugged good looks), to Rinko’s gaggle of friends, who can’t quite accept that Takeo is hotter than Suna as Rinko believes, but won’t deny he’s plenty manly. When Rinko’s mom calls one of them asking where she is, they assume she’s spending the night with Takeo, and do what friends in this situation do: cover for her.

Not that she’s really up to anything that untoward. Takeo and Rinko are stranded in the woods as a matter of circumstance, and make the best of it. Rinko is nervous about being with Takeo, but also feels safe, particularly when Takeo plucks a charging wild boar off the ground and tosses him into oblivion. 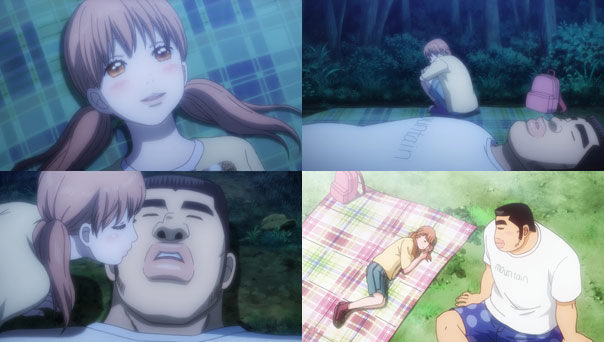 There’s a bit of confusion as to what’s going on with the sky, as first it’s pitch dark, then the full moon comes out, and then there’s lots of stars. But no matter; I don’t watch this show for astronomical accuracy. I watch it for moments like when Rinko notices Takeo has drifted off, and as thanks for all of his hard work (and also because she just plain wants to), she plants a tender kiss on his cheek. It’s her first, but surely not their last. 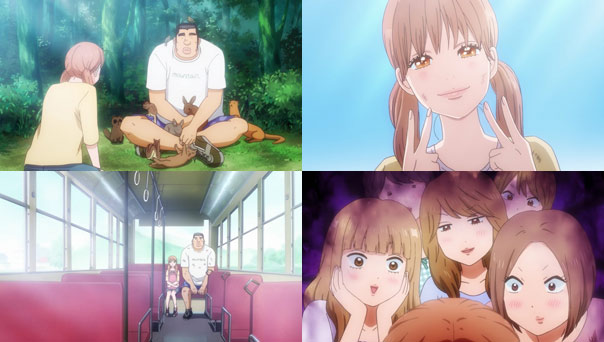 In the morning, Takeo wakes up to find a sleeping Rinko, completing the circle, and also gets to watch her arise from her slumber in the cutest way possible. Takeo’s general comfort in the wilderness is underscored by the fact he’s surrounded by birds and small mammals who feel as safe around him as the most important small mammal in his life; the one with the pigtails.

They continue their trek until they find the road and a bus, and head back to civilization. Rather than upset, Takeo’s mom is just like “Oh, the mountains. okay!” (She’s so awesome) and Rinko’s mom isn’t going to be mad because her friends covered for her, and want all the details of her night with Takeo.

Rinko’s vague phrasing (“my first time”, etc.) excites her friends to no end (right up until she mentions the boar, that is) while Takeo demands Suna show him how to send emoji to Rinko so he can properly express emotions he can’t easily put into words. Still, the words both in his head and in hers, which we as the audience are privy to, remain clear as crystal: these two love each other so much, and it’s an absolute JOI to watch them. 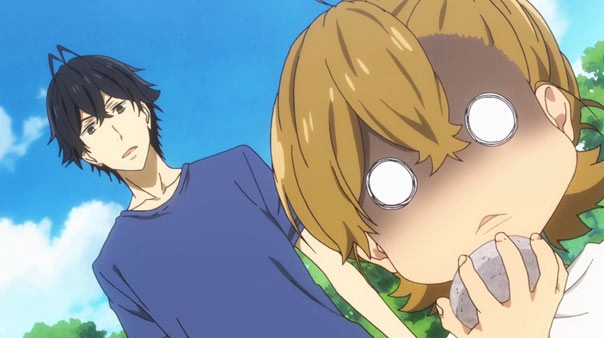 Being the audience this week is tough, because only we know it’s Seishuu’s last day on the island. No one, not even Naru, sees it coming from the way he acts on that last day, and maybe that’s the point. After helping Naru’s grandpa build a wall, he attends the village festival with Naru and Hina, and seems committed to not spoiling the little time he has left with them. 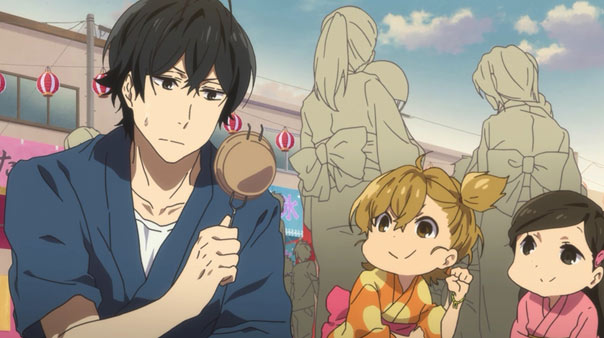 He does, in fact, try to tell everyone (everyone being Naru, Miwa, Tama, Naru, Hina, and Hiro), but it’s just when the awesome fireworks are about to begin. He can’t very well say it then, now can he? The reaction would be predictable, with Naru likely having a fit and running off, possibly into danger. All episode I was waiting for that kind of confrontation. 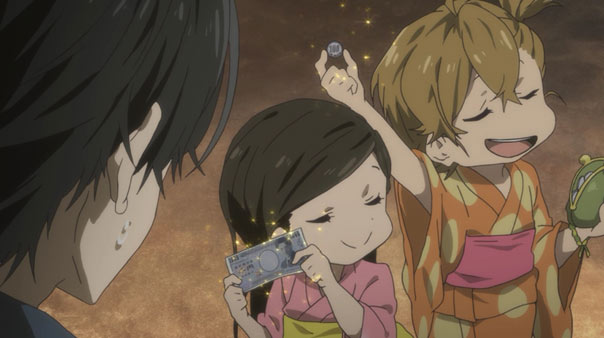 But nothing of the kind came; in the end, Seishuu chose not to mar another happy, fun day with the villagers that just happens to be his last. Instead, he lives that day to the fullest, and doesn’t so much as betray a hint that he’s out of there the next day. He disappears from the island as quickly as he appeared, but his absence is sure to lead to despair. 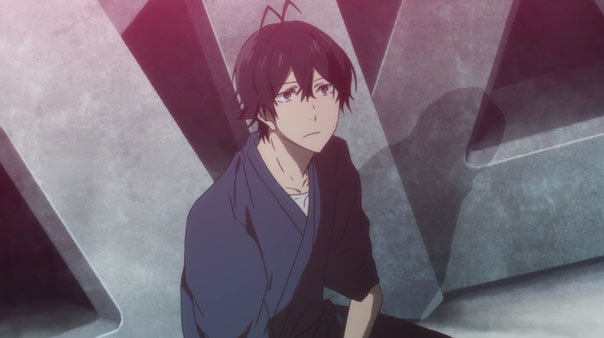 Part of me is afraid of the possibility that Seishuu always meant to leave suddenly ike this, like ripping a band-aid from a wound, and that his connection to the island was never as strong as it seemed; that he was merely here to figure out his calligraphy, and once he had, had no further reason to be there. For the record, I don’t think (or rather, don’t want to think) that’s true, but it’s hard not to think like that considering how suddenly he peaced out. 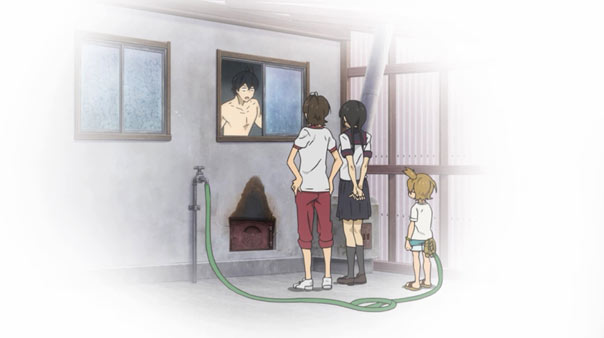 Seishuu may have acclimated somewhat to his remote island village home, but that doesn’t change the fact that he’s a city boy, and there’s still a lot he has yet to experience. Case in point, when his gas-fueled bath heater packs it in, he must resort to foraging for twigs and building a fire in the old wood heater. The village chief makes the point that if Seishuu had a wife, she’d tend the fire for him. 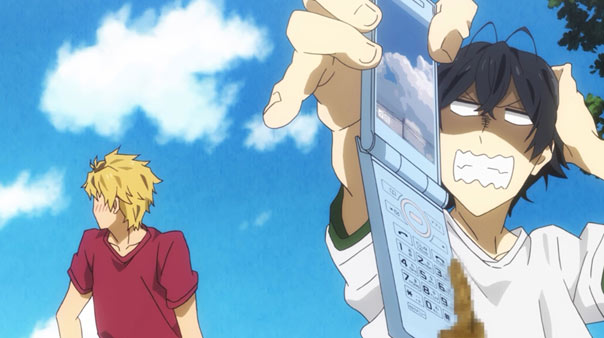 Seishuu has never bothered with romance, pouring everything he has into his art, reasonably certain he’ll die alone, but not necessarily happy about it. He emerges from the bath and is surprised to find Hiro in the kitchen making his food (his mom was busy). Hiro often seems more mature than Seishuu despite the fact the latter is older, and that’s exhibited when Seishuu tries to “out-prepare” a bowl of miso cucumber rice. Suffice it to say, Seishuu can’t cook…but he’s too proud to admit it. 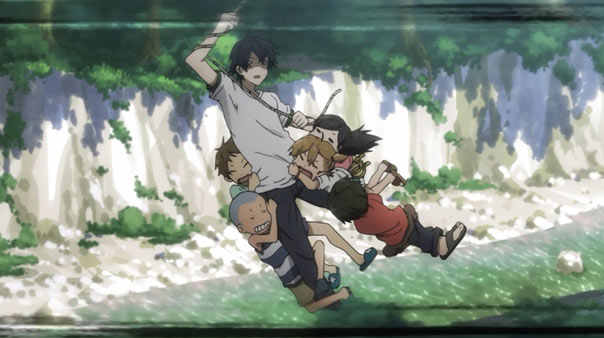 Next, Seishuu finds himself in the middle of deep-seeded island politics when Hina tells him Naru is being bullied by kids from the neighboring village. Seishuu and Hiro try their best to reason with, and later intimidate the little punks, but they’re at a distinct disadvantage in that said punks know the adults can’t really hit them, or they’ll be arrested. Turns out the punks are friends with Akki, who resolves the situation simply by passing by. If anything, this segment reminds me of the best strategy for dealing with combative kids: Don’t. Just avoid them if you can. 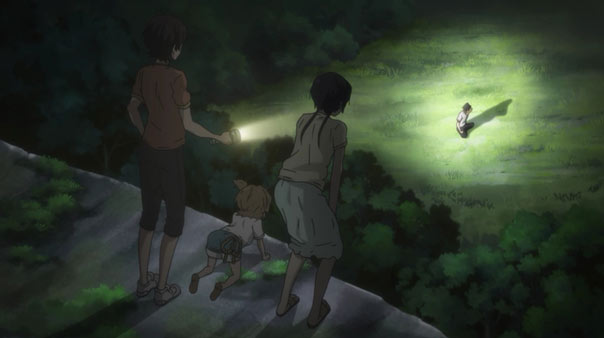 Finally, with just over two weeks left until the Naruka Exhibition, Seishuu’s sparks of drawing inspiration in response to his new living situation have grown more infrequent, to the point where he questions the efficacy of simply waiting for inspiration to show up, even though that’s really the only way. After a day of playing Tarzan with the kids, he gets one in the form of a truly awesome sunset. He makes a move back for home, but slips and falls off a ledge. 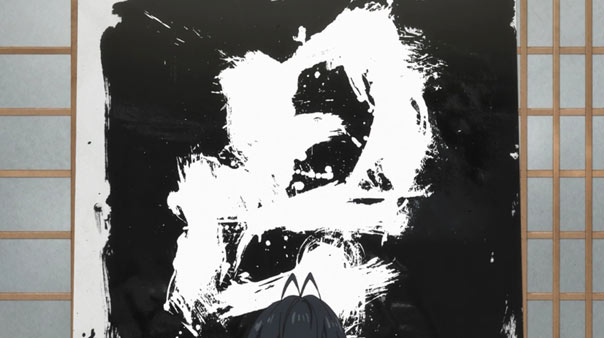 Reverting to full City Boy mode, being isolated, alone, and lost in the dark terrifies him, until he sees a glint in the grass and finds the key to his house Miwa had lost. Then he gets his second flash of inspiration of the day: a majestic star field. His resulting drawing, with white writing on a black background, is another fun, striking, inventive piece he never would’ve attempted before coming to the island. Which begs the question: what is said to him on the phone that makes him so quickly and easily agree to leave?