Three percent of the population of Fukuoka’s Hakata district is hitmen. In the first Hakata Tonkotsu Ramens, we meet a number of them…and I don’t like any of them. They’re either dull, or assholes, or both.

One of the assholes is a cross-dressing dude who is trying to kill his way out of debt for his little sister’s sake. He’s hired to murder an employee at a club who was skimming profits to the tune of 10 million.

Many hours later, a shaggy detective is tasked with discovering the club employee’s murderer…only to be the cross-dressing hitman’s next target.

Another asshole is the son of the mayor, who has a habit of abducting women, taking them to hotels and beating them to death if they won’t let him have his way with them.

This horrific monster is the spawn of Hakata’s mayor, who suggests minimizing his own exposure by giving the brat women with no families who have recently been brought into the country via human trafficking.

Meanwhile, the brat’s friends lynched a foreigner who is now in a coma, and the foreigner’s foreigner friend wants revenge, so calls upon some hitmen, which includes a little blonde girl, because sure, why not.

They end up mistaking another hitman hired to kill the attacker, who is on his first job since being transferred to Hakata from Shinjuku by the professional killing company he works for, RED RUM (har har). 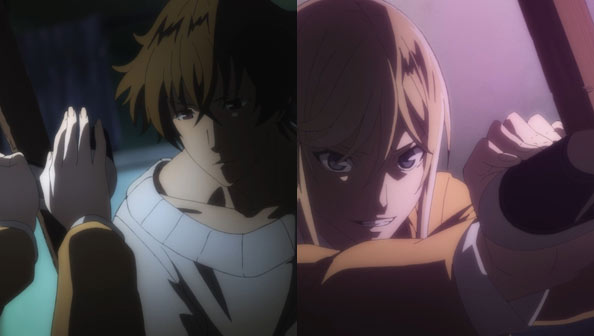 This is all very dreary and unappealing so far. An entire city of hitmen is obviously ridiculous, so this show scaled it back to “three percent”, which is probably an abnormally large proportion but it doesn’t sound like a lot, it just sounds kinda limp.  And it doesn’t really matter how many hitmen reside in Hakata if none of them could create a single positive impression on me. Pass.