“Hero” is rarely a title rightly given to oneself; it must be earned and bestowed upon them by those who deem them a hero. And sometimes it’s not the hero’s choice; they just are a hero, because that’s what the people say. Kino runs into one of those people, a tour guide and true believer who fawns over the great hero of her people and gives them a tour of his modest house.

While in there, the tour guide tells Kino and Hermes a number of stories about the relics on display, like a shovel that let him plant flowers anywhere (that was probably for digging poop holes) or his special knife (which is just a souvenir from another country).

Finally, Kino and Hermes meet the hero’s motorrad, kept in perfect running condition, but not ridden since his master’s death. He’s in his version of Hell, and wants desperately to either be freed or destroyed. Kino can do neither; not without deeply offending the people. Would YOU want to get on the bad side of that tour guide? Nuh-uh.

However, before leaving town Kino is approached by a boy who dreams of being a traveler, like Kino and the hero of their country. Kino nudges the kid in the direction of the hero’s doomed motorrad, leaving it up to the kid whether he’d like to take it for a ride. I doubt he could ever go back if he did, though! 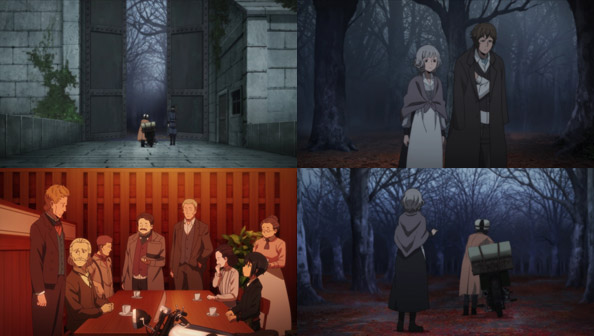 Upon entering the gates of another country (the only gate through which travelers can enter or exit, oddly enough), Kino and Hermes find themselves in a dark wood, out of which a man appears and, talking to them as if he knows them, asks if they’ve seen his lover or were sent to give him a message about her. The man’s maid/caretaker catches up to him and takes him back home.

Kino and Hermes go into town and get the skinny on the man from the folk at the inn: He was the hero of their revolution, who had fallen in love with a farmer’s daughter. When the day of the revolution came, he launched a grenade at the escaping royal family’s car, killing them.

His actions secured liberty and a new government for the country, but the princess whom he’d slain turned out to be the farmer’s daughter. Wracked with grief and betrayal, the people say he went mad; and has had to be cared for by one caretaker after another.

For five years, he’s waited for his lover to return, and everyone keeps lying to him. Apparently no one wants to be the one to give him the bad news that she died, because they all say they’ll continue to lie until he dies or they do.

After helping the man’s caretaker get her wagon out of the mud, she offers them tea at the house the government built for the man. After sending him away by lying about an engine noise at the gate, she sits down with Kino and Hermes and tells them the truth: she is the princess, the royal family the man killed were body doubles, and her real family is safe and living comfortable lives out of danger.

Despite the man not knowing who she really is, the princess is still happy, and never wants things to change. The next day, when Kino and Hermes prepare to leave, the man runs out to meet them once more and tells them the truth: he’s not really crazy; he’s actually happy with things the way they are. Everyone in this country is happy lying to each other for their whole lives. I’m not sure if I should pity them or envy them.