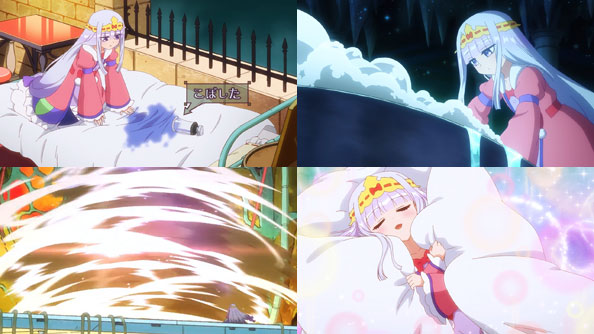 Hero Dawner and his party take three trap-ridden paths that end up leading them all the way back to Goodreste, which undermines the whole point of capturing Princess Syalis. The Demon King wants to fight the Hero, be he also wants the Hero to have a sporting chance.

As the Big Ten Demons discuss all the means by which they’ll lure the Hero to them and level him up (if he ever makes it there), Sya ends up using those to wash a blue stain out of her comforter. She sullies the Fountain of Purity, uses a mini tornado bomb to agitate the washwater, uses the Magnespear as a drying rack, and uses Professor Gearbolt’s new mecha as a spin dryer. 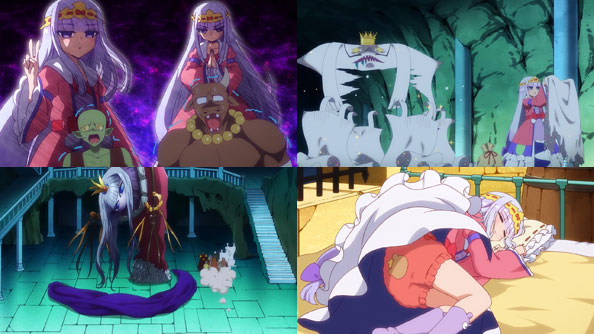 When the seasons start to change and a chilly wind enters her chamber, Syalis realizes she left her prized woolen underwear at home, and so must make new ones. Again, given adequate motivation, she’ll stop at nothing and spare no demon’s welfare to achieve her quests goals.

That said, she remembers her mother telling her as a kid not to lift up her skirt to reveal her undies, nor mention them to anyone, in order to preserve her dignity and that of the crown. As a result, she uses various non-verbal forms of code to try to express to the demons what she’s making. They misinterpret her code and go on high alert, believing she’s creating some kind of weapon to destroy the castle. But nope…she just wants a warm stomach at night! 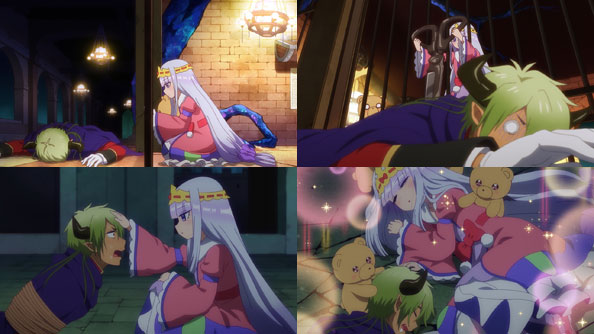 All this chaos, and Hero’s inability to arrive and get this confrontation over with, has the Demon King in a constant state of anxiety and insomnia, collapsing in front of Syalis’ cell door. While she momentarily considers “finishing him off” with her giant scissors, she instead tries several methods to put him to sleep, none of which remotely work.

That is, until he asks her what she does to fall asleep, and again she remembers what her mom did for her. She pats the Demon King gently on the head until he nods off, then falls asleep beside him until her plush bears carry her off to her bead.

And so without any meaningful action from the Hero, Syalis has successfully neutralized the Demon King and his court. There’s really no coming back from his present drop in credibility as a villain. For cryin’ out loud, he was head-patted to sleep by his supposed hostage! 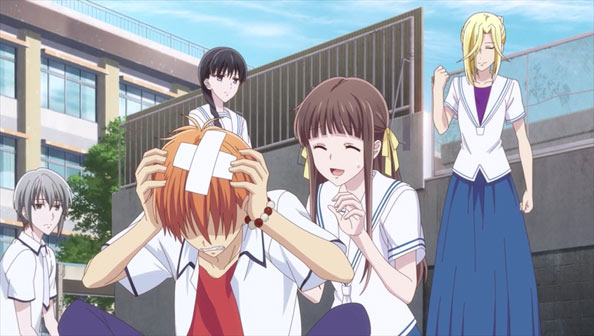 After a Motoko-shaped tangeant, Furuba returns the focus to Tooru, Kyou and Yuki, along with Tooru’s BFFs Arisa and Saki. Career plans are due, which means there’s also a new focus on what exactly these kids will be doing with themselves after they graduate.

Tooru’s always imagined herself getting right to work in lieu of college, but her friends don’t rule out the fact she might get married. Heck, even Arisa doesn’t rule out getting married! Of course, Anyone would be lucky to have her. 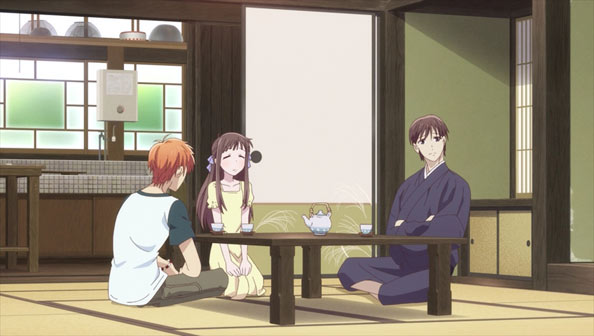 Tooru is excited to accompany Kyou to his shishou/dad Kurama’s dojo for lunch, only to find Kurama can’t cook for shit. He also chopped off his luxiriously long hair, citing superstition.

Tooru also meets Kurama’s assistant Tomoda, who like Kurama has certain nuggets of Kyou’s childhood. Despite his zodiac’s reputation, he was a young lad like any other non-Souma kid: scared of things he isn’t now, but also of things he’s still grappling with. 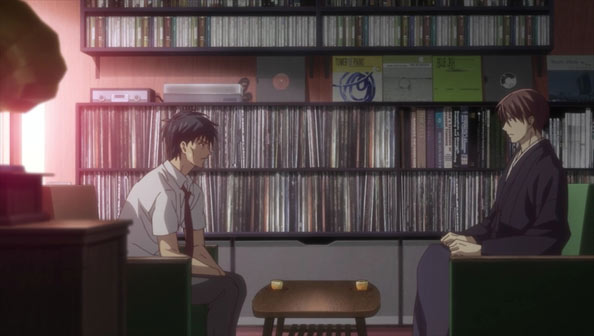 Kurama is promptly called away to meet with Kyou’s real father, a man who clearly values his admittedly impressive vinyl collection over the fruit of his loins. He’s hoping Kurama will be on his side when the time comes to “confining” Kyou post-graduation.

It’s what’s always been done with the cat, but this prick doesn’t know how much progress Kyou has made, nor Kurama’s commitment to protect Kyou like his own son no matter who opposes him…even Akito. In this regard, you could say he chopped his hair as a sign he was choosing Kyou over cruel tradition. 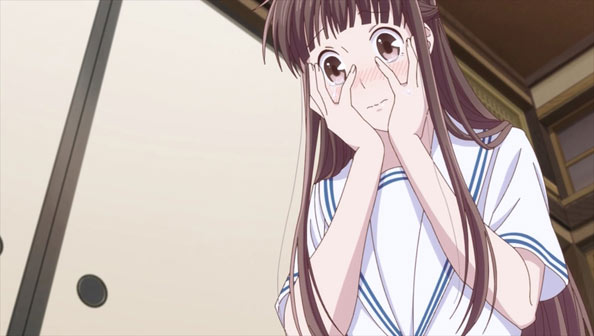 Kurama eventually returns home, and enjoys a curry with Kyou and Tooru, not letting Kyou’s “real” dad rain on his parade. Later that evening, after Yuki has already retired to his room, Tooru and Kyou get to talking about their respective futures, and the possibility of suffering the same fate as previous Cats comes up.

In turn, so does Tooru’s plan to become independent, which was conceived for her mom’s sake when she was still around. What if circumstances allowed her to pursue other futures that don’t sacrifice her freedom? Not knowing which future is best or possible, Tooru ends up in a spiral of uneasiness and eventually anxiety, and asks Kyou not to notice when she’s “intentionally ignoring things” lest she “go all week.” 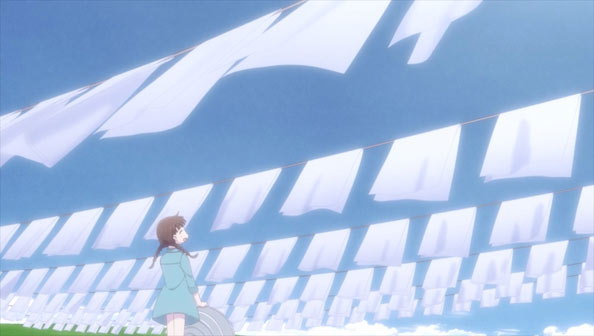 Shigure, inserting himself in a very close moment between Tooru and Kyou, has a very comforting talk at the ready (in part because he wants to eat some of the somen they made): Think of all the questions and problems of the future as a massive mountain of laundry. Worrying about whether and how to do it all only wastes precious time. Instead, simply wash what’s at your feet, little by little. The mountain will gradually shrink, and before you know it, it will be gone.

Shigure’s words are backed up by the sheer amount of progress made by Kyou, Yuki, and Tooru since episode one of the first season. They are now in the future of that time, and have been systematically cleaning one piece of laundry after another. They’re in a better place than their worries make them think.

Shigure’s other piece of advice is that whenever that uneasiness comes—and it will always come, as it should—don’t be afraid to take a pause and do something to distract you and make you happy, whether it’s watching anime or having a meal with loved ones. Sage advice, especially considering neither Kyou, Yuki, nor Tooru have to worry about facing their futures alone.

They have each other, Arisa and Saki, Kurama, Shigure (if he doesn’t turn on them) and many others who will continue to support them. 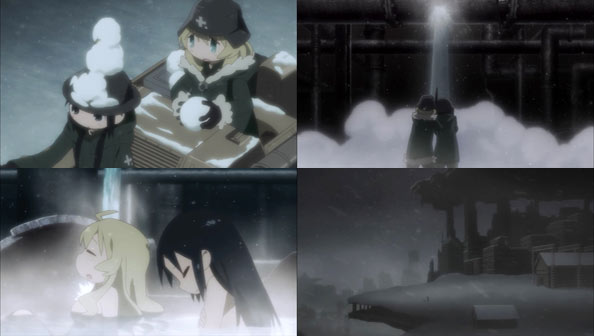 Chito fights to stay awake at the handlebars as she searchs for shelter in a stinging snowstorm…and Yuuri builds a mini-snowman on her head. It’s pretty indicative of their relationship: Chi-chan may be the brains of this survival operation, but her seriousness is tempered by Yuuri’s more easygoing nature—when she’s not pointing a rifle at Chito, her only friend in the whole world (no one threatens anyone this week).

They find an old building, but it’s still cold—until they find a pipe that isn’t. Chito helps a freezing Yuuri steady her gun and blasts a hole in the pipe, then they use the Kettenkrad to haul a pipe fragment to fill and make a hot bath. Not only does the bath look extremely comfortable to spend time in, but proper hygiene is absolutely essential when trying to survive and this is only their fourth bath since leaving home. 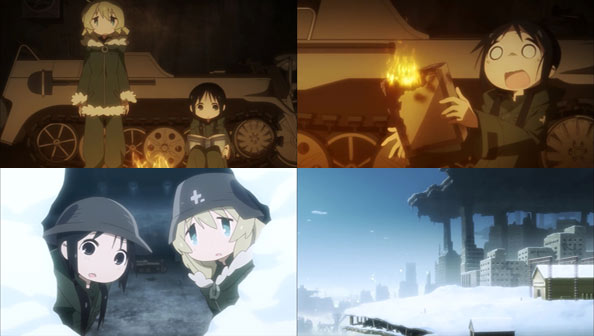 After the bath they get a fire going, and Chito writes in a journal by the light. We learn Yuuri can’t read or write (at least not on Chito’s level), and the difference in education and value placed on the written word brings the two into philosophical conflict:

Chito: Memories fade, so we write them down.
Yuuri: Memories just get in the way of living.

(It’s also worth mentioning the language Chito reads and writes in isn’t Japanese, at least as we know it; they come across a Japanese sign she can’t read. Another indication we’re either dealing with the distant future or an alternate universe.)

Yuuri doesn’t even really pay attention when Chito is underscoring how valuable books are, so when asked to add fuel to the fire, she tosses a book in, and Chito isn’t able to put it out until it’s half-destroyed. Chito goes to bed angry at Yuuri, and when the winds outside intensify, it looks as though Yuuri is going to add Chito’s journal to the fire. If the choice is between staying warm enough to live versus the book, there is no choice.

Fortunately, things aren’t that bad (yet), and in the morning, Chito finds that Yuuri drew her sleeping face in the journal, along with the scrawled words “I’m sokky[sic].” She’s no longer mad. And how can she be, when the snows have finally ceased and the skies cleared, giving us a better look at the sprawling ruins of a colossal city of multiple vertical layers, Fifth Element–style. 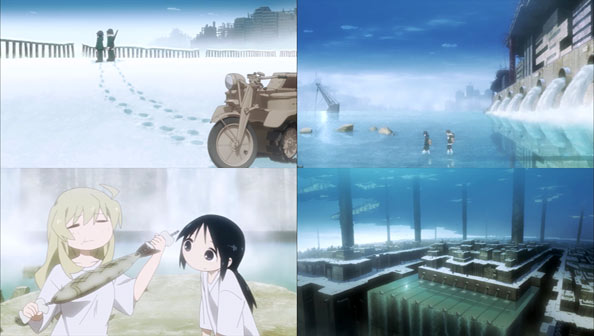 The duo treads water out to the edge of one of the massive structures they stand upon, where a row of huge drains begin to spew forth fresh, pure snow melt, which Chito suggests they’ll use to do laundry—no point in washing yourselves if you’re going to keep walking around in filthy rags.

As their clothes dry, Yuuri finds a fish—something neither of them has ever eaten or even seen—but they’re right on when they fire-roast it on a spit. A hot bath, clean water, laundry, and a fresh meal: it’s been a downright luxurious outing for our post-apocalyptic wanderers.

There’s so much to like in SSR, starting with cute (but-not-too-cute) character designs, yin-yang characterization, deft voice work by Minase Inori (Chito) and Kubo Yurika (Yuuri), and gorgeous, gorgeous scenery of a ruined, deserted, but still thoroughly impressive civilization

The camerawork is great too, with some shots capturing two tiny human specks against the majestic the infrastructure, and others in which the girls’ widening faces fill the frame as they exhale in extreme relaxation. It’s a beautiful, heartfelt show; at once big and small; cold and warm; scary and comforting. 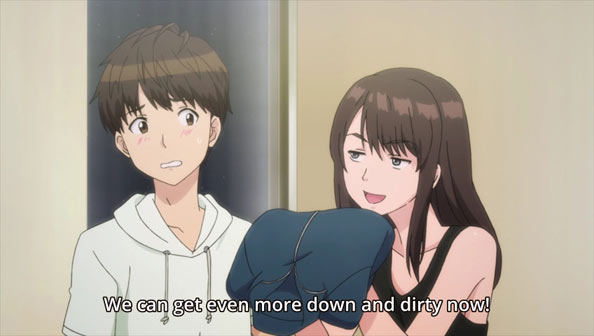 Despite entering his window soaking wet, it’s Hikari who continues to her merciless campaign of messing with Shouichi. She borrows his sweats, but being seen by him in her skimpier outfit leads to rumors throughout the inn, which Hikari feeds into, because she likes watching Shouichi squirm. 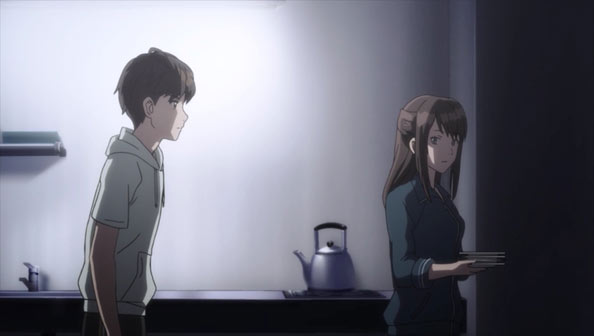 She eventually ends up cooking a midnight snack of a Spanish omelette for Shouichi (along with Ikuo and Hikari’s friend Mako), which along with the laundry, reveals domestic skills Shouichi didn’t know she had. He also protectively gets her to agree not to try to run away from the inn again, in case there are more killer deer or other dangers out there.

Speaking of out there, for being set in the mountains it’s a pretty stuffy episode, with no scenes outdoors and full of drab, monotonous in rooms and halls. Everyone feels a little boxed in, and if the characters were fascinating that could make up for it.

Alas…Seiren doesn’t really excel at much of anything, and with the emergence of Kuzu no Honkai, it’s the show I’m most likely to drop to get down to five total for Winter ’17. I could retain it as a guilty pleasure, but Fuuka is kinda already serving that role.