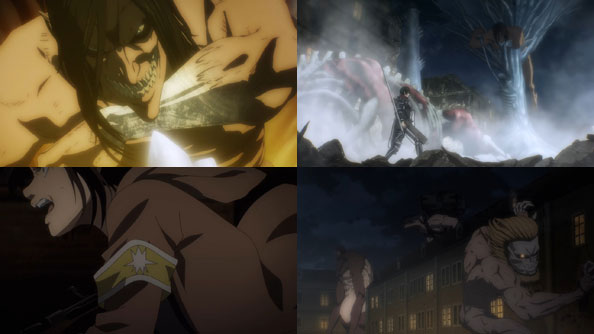 Eren has Lara Tybur in the palm of his hand but isn’t able to do anything with the super-hardened crystal she’s encased in, and she initiates a last-ditch attack that immobilizes him. This gives Pieck, Porco, and Zeke a chance to rally the troops.

Pieck’s machine gun armaments are particularly effective against the Paradisians’ ODM Gear. Gabi also has a gun, and runs. Even if it looks like she’ll never be able to make the slightest dent in this chain of events, well…let’s just say that’s how it looked for one Eren Yeager many years ago.

Reiner was already begging for death before the attack began; now he’s lost the will to even wake up from unconsciousness. He was able to save Falco, but that’s as far as he’s willing to go. He’s as much paralyzed as Eren, but by choice. He was already the aggressor; what’s the point of starting the cycle over?

Eren, full of terrible purpose, tries to bite through Lara’s crystal but only ruins his Titan’s mouth. As Levi stalks the Beast Titan, Eren transfers out of the immobilized body and into a fresh Titan body. Gabi has stopped running, but still has her gun, and wants to use it. Against Eren. Against his allies. Against the demons of Paradis. Then Armin Arlert makes his appearance.

Having hidden aboard an unassuming fishing boat that drifts right into the middle of the Marleyan fleet, Armin transforms into the Colossal Titan, which we recall is a cataclysmic event in and of itself. It’s as if a massive bomb were detonated over Liberio’s waterfront.

The eerie blood-red glow calls to mind Evangelion and the God Warriors of Nausicaä—the 80s precursor to Colossal Titans. The Marleyan navy is obliterated; even the water the ships were floating is all boiled away. Armin climbs out of the Colossal, looks upon his mighty work, and despairs. This is essentially the very same sight Bertoldt Hoover saw in Shiganshima.  What’s past is prologue.

Levi takes out the Beast Titan. Sasha shoots dead one of Pieck’s gunners, then her reinforcements carpet bomb the Cart Titan. The only Marleyan Titan still in the game is Porco in Jaw, who uses his speed and agility to deliver some wounds to Eren. Only Eren uses Lara’s crystal to block one swipe, and thus Porco inadvertently teaches him how he’ll crack that particular nut.

Levi cuts Jaw’s legs off, and Eren uses him as a nutcracker. The crystal doesn’t just crack, it shatters into a million pieces; Lara is just a spray of blood, most of which Eren swallows up, thus gaining the Warhammer power. Zeke is out of commission. Pieck looks near death. Jaw himself is about to be eaten by Eren. And oh yeah, Hange Zoe has arrived via armored airship to retrieve the assault force. 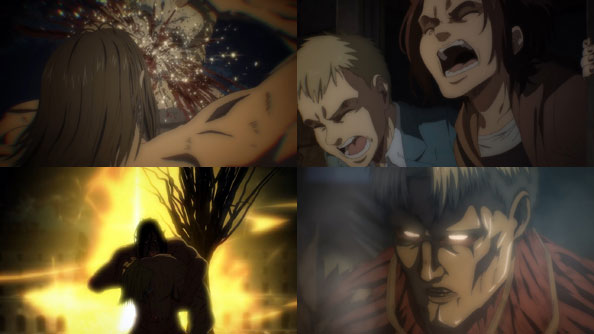 All Gabi can do about this situation is call out to the only Titan left: Reiner. So she cries out to him, in an extended scene that I hope Ayane Sakura recorded in parts because it sounded painful to scream that much. Falco joins in, and their two-kid chorus reaches Reiner, even though he’d prefer if they just stayed quiet.

Reiner knows if he gets up, he’ll be giving Gabi and Falco a good chance of dying even more horribly than they might have otherwise. All the same, he can’t ignore their cries. He transforms behind Eren, interrupting his eating of Jaw. He’s not in his full armor—indeed, he already looks exhausted before raising a hand to Eren, and certainly not particularly happy to be here once more. But if certain kids won’t let him die in peace, he’ll just have to die more violently, even if those kids will rue the day they asked to be saved.

Well, that was a goddamn downer. It feels downright wrong at this point to outright root for the Paradis forces. Heck, even Mikasa and Armin look like they’d rather be anywhere else…like back on that gorgeous beach. At the same time, did they have a choice? Willy Tybur was coming for them with the full force of the Marley Titans. The majority of Eldians of Paradis don’t deserve death any more than the Eldians of the Liberio Internment Zone.

In any case, a large number of lives were going to be lost. The only question was from where those lives would be taken. There are no heroes here, and probably never were. Only warriors on both sides sacrificing their humanity to try to ensure their side suffers a little less this time around.

In last week’s big finale, Eren bursts on the scene as the Attack Titan. This week begins with Willy Tybur saying goodbye to his family, perhaps for the last time. His plan is to draw out the Titans with as many people from around the world watching in order to maximize the carnage. Commander Magath can’t promise he can protect Willy, but Willy doesn’t want protection. After all, the nations won’t unite against Paradis if he doesn’t survive.

Eren’s attack mirrors Braun and Bertoldt’s attack on Shiganshima many years ago, as we watch from the perspective of people on the ground as chaos reigns. Gabi turns to Zofia to find she’s been crushed by a giant boulder, while Udo is trampled to death. Colt keeps Gabi from suffering the same fate by holding her close against that same rock.

Of course, while Willy fully intended to sacrifice his own life on the alter of global cooperation, he also intended for whatever was left of the Marley military in the area to mount a counterattack. It is led by the Tybur family heirloom itself, the Warhammer Titan, but Willy isn’t its pilot—his younger sister Lara is.

When she transforms, the Warhammer immediately starts whaling on Eren, who can’t penetrate his foe’s hardened skin even with his hardened fists. He’s impaled on a giant spear. Meanwhile, Pieck and Porco are rescued by the Panzer Unit, whom Pieck instructed to follow them when she hugged one of them. As they emerge from the house, we hear that oh-so-familiar sound of zipping ODM gear overhead. 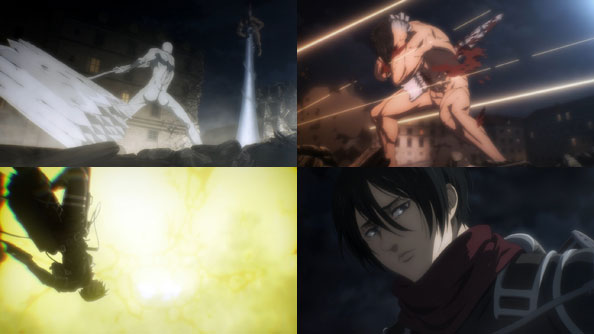 The Attack/Warhammer stalemate is seemingly broken when the military, led by Magath, starts firing at Eren anti-Titan rounds. He’s in trouble, so who should appear in the nick of time but his raven-haired guardian angel, Mikasa Motherfuckin’ Ackerman, sporting a new short hairdo and all-black Survey Corps uniform.

Mikasa attacks the Warhammer’s nape with a whole bunch of explosive missiles, disabling her temporarily and giving Mikasa time to ask Eren to come back home. He can’t undo what he’s done—including killing scores of innocent civilians—but he can stop continuing to kill them. Eren doesn’t seem interested in stopping what he’s started.

Despite her adoptive brother, best friend, soul mate, and one true love basically commencing his heel turn before her very eyes, Mikasa won’t leave Eren’s side or stop protecting him, as she must do when the Warhammer wakes up. But Eren noticed something fishy when the Titan constructed from the bottom-up rather than the usual nape-outward.

Colt and Gabi take Udo to the hospital, but they’re in triage mode and Udo is already dead. Gabi is still largely in shock, and doesn’t understand why Zofia and Udo just died, but decides she’s not going to run and hide, but join the military in the fighting.

Upon reaching the gate, the guards (who know and are fond of her) warn her to run, and are both shot dead…by Sasha Blouse. Sasha and Gabi lock gazes, but Sasha doesn’t kill her, instead joining Connie, Jean, Floch, and the rest of the Survey Corps in their operation.

As Mikasa distracts the Warhammer, Eren finds a hose-like extension from its feet, and locates Lara, who is encased in the same kind of extra-hard crystal as Annie Leonhart. Nevertheless, the egg-like “cockpit” is small enough for Eren to eat and thus inheret the Warhammer Titan’s powers. Before he can chow down, he’s interrupted by Jaws, piloted by Porco.

Porco, however, doesn’t have enough time to bite through Eren’s nape, because Levi swoops in and slices Porco’s nape, continuing the thrilling back and forth. Porco can only watch helplessly as dozens of Survey Corps soldiers descend upon him—mere humans not only unafraid of the fact he’s a Titan, but ready to end him. To paraphrase Magath, there are devils on both sides. There always were.

The war between Marley and Paradis has well and truly begun, and assuming enough foreign dignitaries escaped the carnage, it won’t be long before other nations answer Willy Tybur’s call. Meanwhile, Paradis has come in force to wreak havoc on Marley and, presumably, destroy its own force of Titans, while Eren may have his own, more nihilistic agenda. In any case, it’s great to see the old gang in action, looking much cooler—and more hardened—than the goofy kids we saw on the beach.

Magath ends up surviving a grenade attack, while Braun and Falco are missing for the entire episode. It will be interesting to see if Braun passes the Armored to Falco due to the fact he’s not certain Gabi survived Eren’s attack. Falco wants Gabi to live a full life, but Gabi wants revenge for Zofia, Udo, and all the other comrades and friends she’s lost.