In the end, Kumiko couldn’t do it. Or at least she couldn’t do it in time: confront Yoroizuka Mizore about Nozomi. Time is something no one in the concert band has: the competition is in ten days and they’ll be playing after Myoujou Technical.

It’s apropos that moments after nailing her piece in practice, Nozomi appears to praise her, than to ask if Mizore is around, since she heard her oboe. An oboe, by the way, that Nozomi remembers as being far more “fun” than it is now. 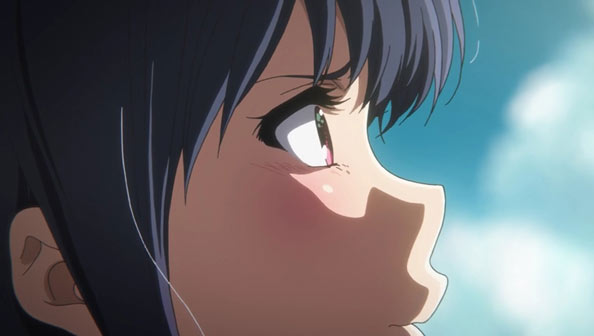 There’s a reason for that, and it’s revealed this week, in IMO the best episode of the Fall 2016 Season so far (keep in mind I’m not watching Yuri!! On Ice). The tension when Kumiko realizes Nozomi is headed to Mizore, and Mizore’s painful reaction and quick retreat, are all beautifully done, as is Yuuko dropping all pretense and begging Kumiko to find Mizore quickly. 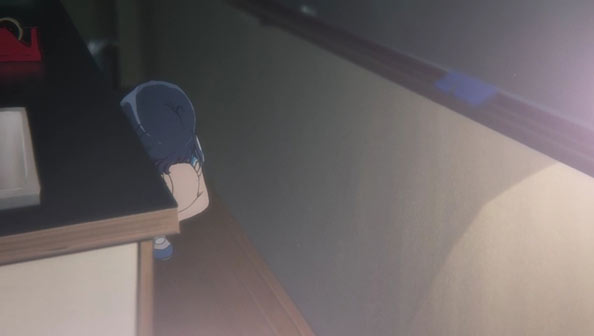 Kumiko is the one who finds Mizore first, and though she didn’t get to her in time to save her from a painful encounter, she more than mitigates that by forming the conduit through which misunderstandings can be cleared up and fences mended, which was Kumiko’s hope in getting involved all along.

Mizore, as we know, is bad with people. It’s hard for people to approach her and harder for her to approach them. So when Nozomi did approach her, in middle school, and they became fast friends, it was a revelation.

So much so, that when Nozomi quit the band without telling her, Mizore worried that it was because she was being left out. Nozomi was her only friend; Nozomi had many; and she feared more than anything that she was mistaken about their friendship.

When Nozomi quit, Mizore shifted to Yuuko, but anyone could hear in her oboe play that she was still playing only for Nozomi; that Nozomi quit and could no longer play with her. When Yuuko arrives, worried sick, Mizore is so worked up about Nozomi that Yuuko has to remind her she has her too.

To that, Mizore reveals something more: that Yuuko was friends with her only out of pity; another misunderstanding. She was also mistaken in thinking her guilt over Nozomi and the others quitting was more important than being happy about winning the Kyoto Competition.

Tanezaki Atsumi and Yamaoka Yuri do superb, powerful work here, bringing vitality and raw emotion to Mizore and Yuuko, respectively; there are moments when Tanezaki channels Hanazawa Kana. When Nozomi enters the classroom to find out what’s amiss, Touyama Nao adds her voice to this choir of awesomeness.

The most important misunderstanding is revealed by having the two friends finally face each other and clear the air: Nozomi didn’t tell Mizore she was quitting because she didn’t want her to quit too. She admired how diligent Mizore practiced.

It’s also a case of my patience being rewarded, and I always reward shows that do that. Just when I needed some kind of catharsis over the building character tensions Kumiko was juggling, we get exactly that, and it’s as compelling and dramatically satisfying as anything on HBO. That’s the power of KyoAni at its best. 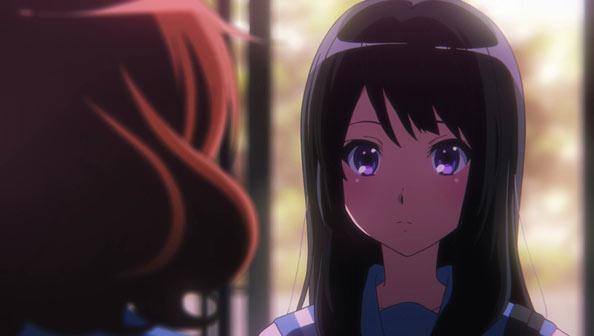 Those fantastic scenes between Kumiko, Yuuko, Mizore, and Nozomi were bookended by Kumiko encounters with her older sister (who wordlessly storms past her and out of the house after an argument with their father), and her sister from another mother, Reina. The earlier scene very succinctly illustrates how wading deeper into her bandmates’ problems has taken her further away from her family’s. To be continued.

Her scene with Reina, on the other hand, is almost a reward for Kumiko (and us!) For a second I thought she’d bring up the fact that Taki-sensei is a widower. Instead, she asks Reina if there’s anyone in particular she plays for. Reina is, as Kumiko so perfectly puts it, “so Reina” in her reply that she mostly plays for herself.

But I’d wager a part of her plays for Kumiko too, as part of Kumiko plays for her. After all, come the next competition, everyone in the concert band will live and die on each others’ performances, not just their own.