After a rough, uneven road trip last week, 91 Days smooths out a bit as Nero is lured back home by the promise of a truce with Orco. Unfortunately for Nero, that truce is dependent on him dying, something his brother is willing to make happen for the good of the family, with Ronaldo’s blessing.

Nero smells something rotten in Denmark and bugs out of the meet-up, leaving him, Avilio, Volpe, Valbero, Colteo, and a wounded Tigre out in the wind. If Avilio isn’t careful, fate will take care of Nero before he can!

Naturally, he’s not going to let that happen. He’s gotten this far in gaining Nero’s trust, and he needs to get closer to Don Vanetti before he’s satisfied. So he sneaks to the Island with Colteo and his fine, fine hooch, in order to parlay with Fango.

Nero wants nothing to do with Fango (since he believes he killed Vanno), but Avilio forces the issue, confident Nero’s loyalty to his friend Tigre overshadows his hatred of Fango.

Fango doesn’t so much receive Avilio and Colteo so much as they’re delivered into his clutches by his lover. Fango claims to not want to do business with Avilio after what happened to Serpente, but unlike Nero, he’s only joking. Avilio offers Fango something he wants—Don Orco on a silver platter—in exchange for protection.

Never mind that Nero has no plan to nab Orco; as long as Fango thinks he has a plan, he won’t kill them all, which is the whole point. I for one am glad we’re seeing a more reasonable, less chaotic Fango who is willing to hear the enemies of his enemies out. Returning the Island is the best thing 91 Days could have done.

This week documents the adventures of Nero and Avilio on their road trip, with dwindling funds and a hitman on their tail. After the action, intrigue, and tragedy of the first three episodes, this…was a bit of a drag.

A road trip is an opportunity to spice things up, but the manner in which 91Days does this is scattershot and disjointed in nature. The guys have a little fun doing tricks for kids, but it’s too obviously a means to show Avilio the innocence he’s lost. 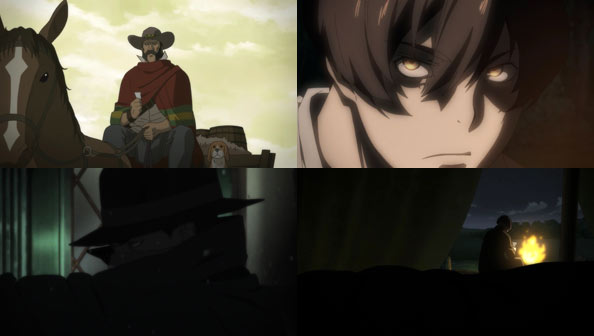 Meanwhile, the lumbering Mexican hitman is about as one-dimensional as you can get; more a walking plot device to be defeated than a character. Fango, while evil, was a lot more interesting than this guy.

After managing a smile while around the kids, later in the night Avilio continues practicing his murder face while Nero remenices on his first job with the family, which was the night Avilio’s family was killed. Nero was the one who shot at Avilio as he ran. He realizes there were “three”, but I thought he already knew this.

The episode kinda goes off the rails when the hitman making his move is played for laughs for some reason, complete with a slapsticky kick in the nuts, and failing to kill him by hitting him with the car (which is totaled by the impact).

Sure, the hitman is good at tracking, but never seems to apply his superhuman strength when he needs to. That, and the goofy comic tone to his pursuit near the end, really kills the tension.

He tracks them to a barn late in the night, but once more, “Big Mexico” can’t get the job done. Nero empties a clip into him to no avail, but his well-thrown knife to the back gets the job done…only he gets right back up a few seconds later (only to be blown away by a shotgun-wielding Alex Trebek).

This wasn’t a total loss; Nero had some more adventures with Avilio, making their bond that much closer for when Avilio decides to make his move…but other than that, this was a pretty uneven episode.

There was a bad omen in the beginning, when a waitress’ eyes were pale blue one second and deep green the next. Unlike Nero with his juggling skills, a ball or two was dropped here.

Things went down much faster than expecting in last week’s outing, with Avilio taking out Vanno, only to have a gun pulled on him by Nero. Turns out Nero is willing to hear him out – if they can locate Serpente’s body.

We also meet Don Orco (or should I say Orca?), who is reeeeally particular about the butter content of his lasagna, as is Fango. Where they disagree is on the nature of the response to the apparent death of Serpente. Fango wants a war; Orco wants to make the Galassias happy. 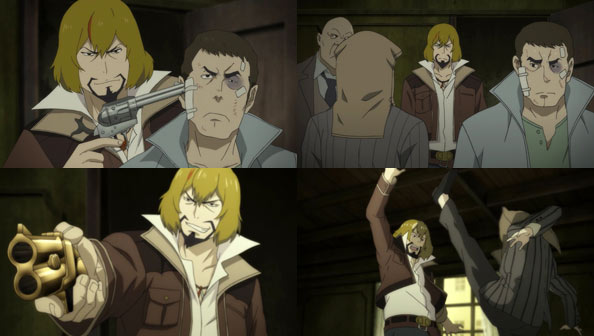 With an assist from Colteo, Avilio locates Cerotto, the guy who sold Serpente’s body to the prohibition official, and locates the place where the body is being stashed. Unfortunately, Fango spots Nero by pure chance (I know tinted windows weren’t around back then, but what about curtains?) and is led to the same place.

Avilio wears Serpente’s suit and a burlap sack on his head to fool Fango into giving up his Vanetti hostage, but like the hit on Fango, it goes sour. Fortunately, Avilio and Nero make it out unscathed; unfortunately, a war between the families is all but inevitable…which is just fine with Fango.

After this latest ordeal, perhaps still stung by grief over losing his friend Vanno, Nero softens towards Avilio once more, even turning his back on him. When Nero’s brother insists he get the hell out of dodge until things blow over, Avilio volunteers to be his driver.

You can kinda tell Nero still isn’t anywhere near 100% sold on Avilio, but if he still suspects him of some kind of treachery, better to keep him close than let him operate out of sight. Avilio, meanwhile, has had nearly everything fall into his lap so far. Is the universe compensating for his past suffering? 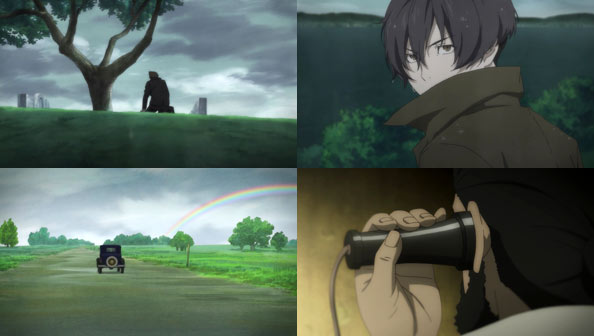 We indeed see the grief Nero feels for his fallen friend when he falls to his knees at the funeral. Avilio is sent back to the car, but he still turns back to get a good look at what he has wrought. At this point, he must be content not to give the game away until he’s wiped out the Vanettis entirely. Long game stuff.

Of course, with a call coming in to a hitman ordering him to go after Nero and Avilio, we can expect things to get even tougher for our antihero after his initial small victories.