Yuki continues to open up to Manabe, expounding on the evolution of his relationship to Tooru. First she was a wierd classmate who lived in a tent, then he saw he could use her to rebel against the Souma clan. At some point, he started to realize strong maternal vibes coming off of her as a result of her showering him with unconditional love and kindness.

It started when she told him to become friends with her again even if her memories were taken by Hatori. And Yuki panicked when he felt this way, and immediately tried to deny and suppress those feelings, even trying to interact with her more “like a man does a woman,” creating a love triangle with Kyou even though the two men weren’t seeking the same thing.

It’s the first time Yuki’s able to talk at all about this being about more than competing or not being able to “beat” Kyou for Tooru’s heart, but rather feeling something other than romantic attraction and being okay with her and Kyou as a couple; after all, he’s observed the two together and is pretty confident they love each other.

The one thing Yuki doesn’t want is to waste the kindness and warmth Tooru gave so freely. He wants to use it to move forward and discover his own “special purpose in life.” He’s buoyed by being able to discuss it so candidly with Kakeru—who he notes is also a kind (in his way) person to listen without judgment. However, Yuki wisely doesn’t discuss any of this with Todou Miki!

Yuki sees a day coming that he’ll be able to tell Tooru how he truly feels and about the purpose he’s found thanks to her love and support. Until then, he’ll keep watching over her, as he does right after casually confronting Kyou about the hat, which causes Kyou to withdraw into his room.

Before Yuki came home, Tooru and Kyou were having a flirt-fight in the entryway over his confiscating of her Cinderella script after she let Shigure know about it. Kyou still hasn’t committed to even participating in the play, and he certainly doesn’t want Shisho to know about it.

There’s also the matter of Tooru simply not being able to act like anything resembling an evil stepsister, as expected. She promises to work hard and even go without food in order to master the role, but it seems hopeless. With Ayame and Mine sure to provide some unique takes on Cinderella costumes and both Kyou and Saki also seeming miscast, the scriptwriter decides to scrap what she has and write a script that better fits the actors.

I’m all for that, and it’s great to see Ayame trying to support his brother in any way he can, once again making up for all the neglect Yuki suffered in the past, including from a then-indifferent big bro. It’s also fun watching Yuki’s classmates react to finally meeting his very different brother—while I’m sure Mine probably felt like she just struck gold upon meeting Saki and Arisa!

When Yuki goes off to look for Kyou for Tooru, he finds him sulking on the staircase. Kyou is going over what he said to Yuki when his hat was offered back to him. Remember: Kyou still considers Yuki not only a rival for Tooru’s heart, but the underdog, even if the truth is he’s running more or less unopposed.

As such, Kyou interprets Yuki bringing up the hat and the fact he gave it to Tooru to be another instance of looking down on him. When Yuki dares bring up Tooru (specifically why Kyou is making her worry by ditching rehearsal), all of Kyou’s insecurities come pouring out.

He lists all the ways he sees Yuki as better—having a living mom and dad, being needed and praised by others, surpassing him easily as he desperately struggles, etc. Had they ever deigned to open up to one another, Kyou would know all those things Yuki has “over” him are more curses than blessings. What I’d give for Kyou to watch last week’s episode and the first half of this one!

Instead, Kyou sees Yuki’s expression—one not of anger but of sadness, almost on the brink of tears—and sees it as yet another instance of looking down on him. So he punches a window and storms off. This results in another welcome interaction betweeen Yuki and Machi, as Machi contradicts her classmate saying he’s the least prince-like person she knows—again, because she knows Yuki’s pain.

Kyou finds Tooru sitting in the classroom after everyone else left, and his thoughts stray towards what she was thinking about before he arrived, when she was alone. When she excitedly presents Kyou with the revised script, I was fully prepared for him to dismiss it out of hand, or even slap it out of hers, like the old Kyou; like the Kyou who might’ve resurfaced after his rant to Yuki.

Instead, he draws ever so close to Tooru, and then agrees to do the play, warning her not to laugh at him! The two share blushing looks before heading home together. The now-explicit contrast between Yuki’s and Kyou’s feelings for Tooru paves the way for potential happiness for all three of them in the future. I’m also not discounting the potential for a relationship between Yuki and Machi—stranger things have and will happen!

One of Fruits Basket’s biggest personalities in Souma Ayame pays a visit to Shigure’s house. He comes with fresh peaches and invites Yuki and Tooru to visit his clothing boutique. Despite how annoying he finds his big brother, Yuki wants to try to understand him better, so to Ayame’s surprise he takes him up on the offer.

Despite a nondescript front and somewhat suspicious sign, the shop itself is pretty straightforward. They sell sewing and handicraft supplies, but Ayame also provides a discrete “custom” tailoring service to satisfy any taste (i.e. cross-dressers/drag/fetish/etc). Ayame is in the back when Yuki and Tooru arrive, but they’re received by Ayame’s charming partner Kuramae Mine—voiced by Index herself, Iguchi Yuka! 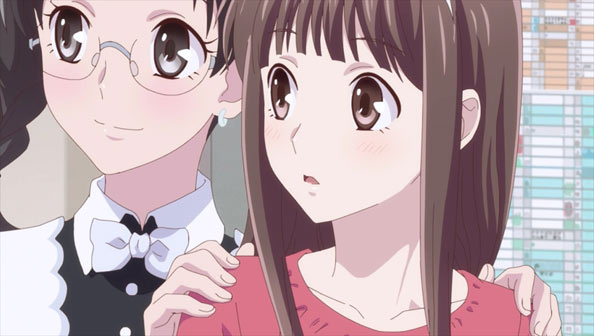 While I’m sure Yuki was glad Tooru accompanied him, the bottom line is he’ll get nowhere in his efforts to learn more about Ayame unless the two sit down together alone and have a proper conversation. That means Mine tastefully takes Tooru to the back and subjects treats her to their ample stock of elegant dresses.

When Tooru laments hearing the brothers fighting, Mine assures her that fighting, in their case, is good—it means they acknowledge one another’s existence. Having witnessed a lot of this with Yuki and Kyou, Tooru understands how any communication is good no matter how aggressive initially is, because that’s the rough first step to understanding one another. 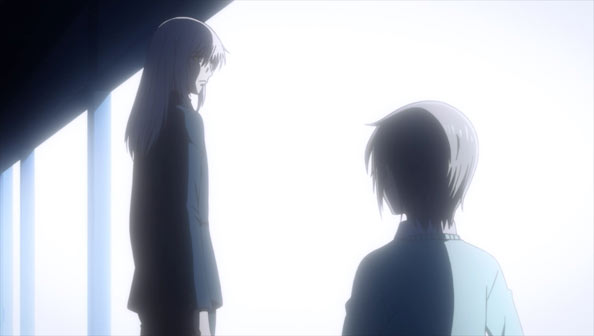 Yuki is in a bad mood to start since that very morning he woke up from a dream in which his mother is asking him why it matters if he’s a tool. The tension between him and Ayame dissipates when Ayame turns down his Noble Charisma Levels a couple of notches and lets a more sensitive and thoughtful side come through.

Ayame regrets how he treated Yuki in the past, most of all because it was an absence of feeling—an existence of nil, neither loving nor hating him. Yuki was part of the background of his life, and the one and only time Yuki reached out to him for help, he slapped his hand away like one would slap a gnat. 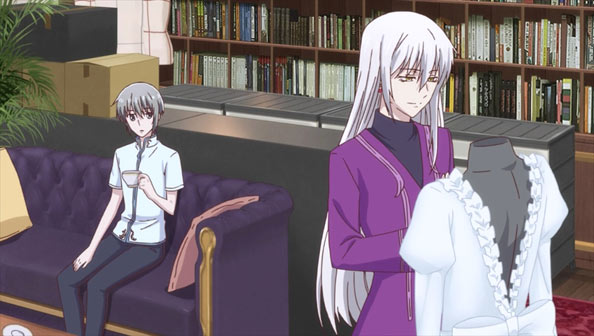 Ayame didn’t realize how much he contributed to Yuki’s misery until later in life, when it was far too late to undo it. He became overtaken by fear that Yuki would exact upon him the same total indifference he’d exacted on Yuki. Dressmaking became his way to show that he was more than a tool, but someone capable of creating something that wouldn’t have otherwise existed.

It’s clear Mine played a huge role in helping to guide Ayame to this calling, which has in turn led to his happiness and desire to mend the frayed bond with his brother, and to forgive himself. When Yuki hears Ayame talk, he can’t help but see a parallel to the garden he tends: making his mark on the earth; showing he exists and can create. 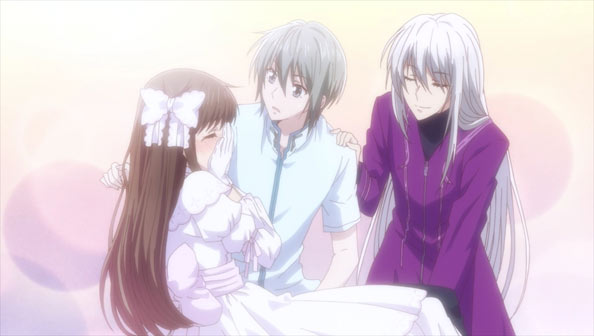 But it’s not just dresses or plants that can’t exist without Yuki and Ayame, respectively. It’s the people they have by their side who allow them to be the best version of each other. Mine is the Mine she is in part thanks to Ayame, and vice versa.

The same goes with Yuki and Tooru—who emerges from the back with Mine glowed up into a pure-and-lovely masterpiece! As long as they have those people—and each other—in their lives, they’ll never be just tools, wandering the desert of indifference alone.

There are always going to be times when Yuki and Ayame don’t agree, see eye to eye, or even understand why they’re doing or saying something. But like two brothers arguing, the fact that they can identify differences means, by definition, that they’re not indifferent towards each other. And like mountains of laundry, reaching understanding means taking things one small step at a time.