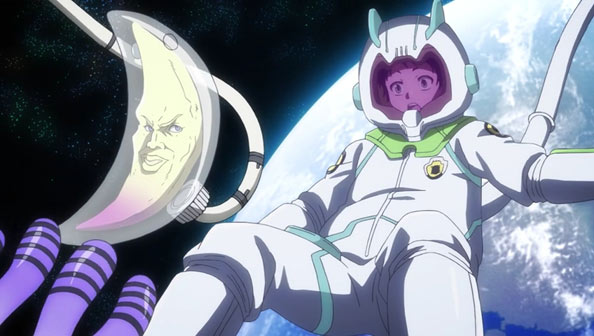 Kokonose Chuuta is a high schooler who avoids contact with others and is always talking to a voice no one else hears. One day he’s scooped up by ēlDLIVE, a space police force, who immediately put him to work apprehending an alien criminal, who turns out to be his buxom teacher.

The voice belongs to an alien who lives within him, and with its help Chuuta successfully arrests the alien and is formally accepted into ēlDLIVE. Among the bureau’s members is his classmate and crush Sonokata Misuzu. 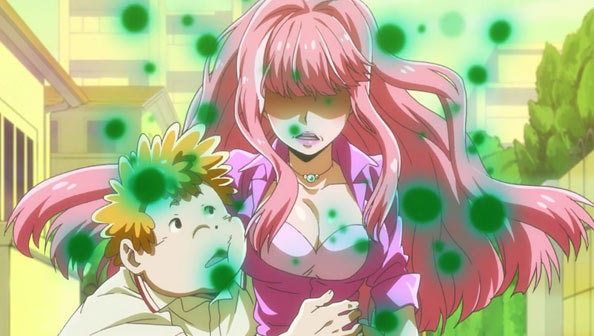 Isn’t it always the way: you try to keep your head down and lead a quiet life helping your auntie at her muffin shop, only to be recruited by a bizarre space police unit? ēlDLIVE presents that rather outlandish scenario, and does it with a brisk pace, confidence, and humor.

Not only that, the person who had been the least human-looking character – Chuuta’s teacher – turns out to be an alien perp in disguise. His crush is pretty generically hostile to him, but at least she’s voiced by Hayami Saori.

ēlDLIVE is fine harmless fun, but there’s not much to it beyond its vivid candy coating, and while it tries to go out there with kooky alien designs, the weird alien that harmlessly pops out of Chuuta’s chest just…doesn’t look that cool. Nor does Chuuta himself, who I guess is supposed to be an innocent weenie.

Still, both the premise and the execution smacks of a show with limited appeal for actual adults – this has Saturday morning kid’s cartoon all over it, unlike something darker like Parasyte. I don’t foresee ēlDLIVE lasting long on my Winter watchlist, but it is inoffensive and decent for what it is.

More jobs have come for Futaba, Ichigo and Rin, to the point that they’re busy enough to end up in the same studio on the same day, not for their Earphones work but for three separate gigs: Futaba is dubbing a zombie movie with veteran Koyama Rikiya (and the rude guy who said she stunk way back when), Ichigo is reading for an audiobook, and Rin is doing voice work for a video game.

Futaba is scared of the film’s horror theme, especially the fact one of her roles is a zombie, but eventually finds her footing, inspired by the always professional (and veggie juice-drinking) Koyama. Ichigo must adjust her voice to something less urgent than anime yet emphatic enough to get the point across. Rin has the strangest and most abstract job, simply firing off all her lines with no one else around, and even making noises for when her character receives small, medium, and large punches.

While all three were nervous going into their respective jobs, by the end they’re all happy and confident in their performances. And while it’s raining when it’s time to leave the studio, Futaba and Ichigo remembered to bring umbrellas, proving they’ve grown since the day they had to share Rin’s due to poor preparation. That preparation and growth is also apparent, as both the rude guy and Koyama say Futaba did well, raising her spirits even more as they head to the wrap party.

So ends another funny, informative, and charming episode about the day in the life of new but increasingly successful seiyus.

Earphones are about to go through a very busy gauntlet of dancing lessons, recording, music video filming, events, and promotion for their first single, “Into Your Ears.” But before that, Futaba recalls the her of last year, who recorded a Drama CD with Kugimiya Rie (the show is on a mini Toradora! tear).

When she passes a video store and sees a display for an anime adaptation of the CD, she gets excited about having to budget her time even more, which feels pretty premature; it’s practically assured at this point she’s going to end up disappointed.

Sure enough, she doesn’t hear from the producers of the CD when she should, and it’s Rin who inadvertently breaks the news to her in the middle of one of their radio shows: she, not Futaba, will be voicing Kugimiya’s little sister in the anime version.

Futaba is able to keep it together long enough to finish the show, but after that, she just needs to get away from Rin, and Ichigo, and everything. The show really lets us feel the sting of rejection, garnished with the extra shock of her friend and unit partner being the one usurping her.

It falls to her senpai Shiodome to talk her out of her funk, and I’m pleased to report Shiodome, while kind, isn’t overly or conspicuously kind, and it seems from her body language she’d prefer not to be so hands-on with her juniors, lest they not learn the lessons they need to learn. But in this case, Futaba had her idea of being a seiyu being a dream burst.

Shiodome clarifies that it’s the audience that sees and hears the dream, not the seiyu. The seiyu make the dream possible through their commitment and professionalism, performing with everything they’ve got no matter what’s going on with their personal lives. And all seiyu, even TsundeRie and Hocchan, have felt the sting she’s feeling.

Futaba listens to her drama CD again and learns that the her of a year ago actually sucked, but realizes the fact she can tell is proof she’s grown, and demands more of herself. Expressing to Rin her jealousy and frustration with not getting the part, but also her excitment by what Rin will bring to the part, help clear the air.

For now, Futaba must focus on Earphones, singing and dancing her heart out. If she does well, she’ll get noticed, and other jobs will come.