Whether he wanted to be or not, Kazuma & Co. are involved in the mission to repel the herd of running hawk kites in heat. Darkness selflessly sacrifices her body to the stampede, only for each and every bird to dodge her, which kinda turns her on anyway.

Darkness’ stimulation continues when Kazuma takes command and uses Darkness as a lure to lead the kites into a cave, the entrance to which Megumin explodes. The armored darkness proves too heavy for Kazuma, so he follows her suggestion to tie her to the wagon and drag her behind, which she really enjoys. It’s basically a Darkness clinic.

Kazuma’s plan to use all the weird abilities and quirks of his comrades (I call it ‘accidental competence’) works like a charm, and that night the convoy want to reward them handsomely…only Kazuma can’t take their money, because he knows something they don’t: the herd only showed up because they were drawn to Darkness, the “hardest” obstacle in the area. 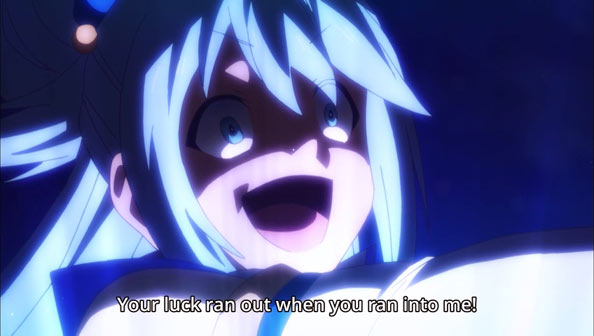 Everyone (except Megumin) awakes in the middle of the night to a horde of zombies, which Aqua quickly exorcises (along with Wiz, whom she overlooked), and again, the convoy wants to reward Aqua and her party, but Kazuma won’t take the money, because again, the zombies only showed up because of Aqua. 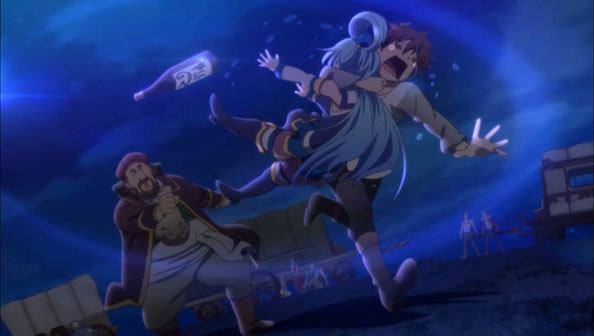 Forget Aqua’s parlor tricks: this party could make some serious money luring baddies into the vicinity of people, then save those people from those baddies. No one is the wiser here, and I bet Kazuma, and possibly the honorable Darkness, are the only ones who would protest such an arrangement, on ethical grounds (which is funny considering Aqua is a goddess).

When the party finally arrives in Arcanretia, it appears to be a lush gorgeous city with clean air and beautiful people, but things turn sour in a hurry when every other person in town turns out to be pushy zealots of Aqua’s Axis cult, which is fine with Aqua, but no one else.

These zealots pull out all the stops proselytizing Kazuma and Darkness and trying to get them to sign up. Darkness also gets turned on when she bears her Eris necklass and the Axis followers react with disgust and spit on the ground.

The Axis followers gradually wear Kazuma down to the point he’s vulnerable to a cute litle girl who trips on a stone. Kazuma and Darkness help her, and she asks his name, and to show her how to write it on a piece of paper…which is the form to join the Axis cult.

With that, Kazuma finally loses it, as any of us would, tearing up the form and making a big loud scene. Darkness may love the abuse the Axisers pile on her, and Aqua may love the positive attention, but this is definitely not a place for Kazuma to heal and relax.

It’s torture, and the episode is very good at heightening his stress until he blows. Only Megumin and temporary party member Wiz aren’t completely unhinged about something this week. Another wonderfully manic and hilarious outing. 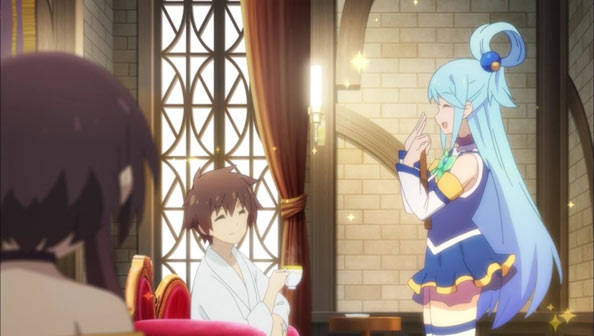 For the first act of this particularly energetic, at times hyper KonoSuba, Megumin is the straight man, watching aghast as Kazuma and Aqua act disgustingly pleasant to each other; even as Aqua purifies Kazuma’s finest tea into plain hot water, he just keeps politely drinking it.

They’re acting this way because they think they’re rich, after a visit from Vanir results in an IP transfer deal that could net them 300 million Eris (or 1 mil a month). After, well, dying last week, I can understand why Kazuma wouldn’t mind hanging up his adventurers’ boots and living comfortably ever after. 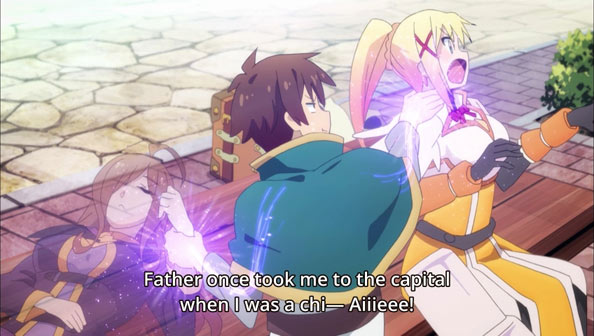 Of course, I neither expect the windfall to come (unless its made of wind, not cash) as Vanir is a sneaky slippery demon, nor for Kazuma to give up his overarching mission to defeat the Devil King; as annoying and useless as Aqua is, he still made a promise to her, and Kazuma is (usually) a man of his word (I can’t speak to Vanir).

Anyway, Kaz holds off on making a decision (lol he’s never getting that cash) and accepts Megumin’s suggestion the party head to Arcanretia, the city of water and (hopefully for Kazuma, mixed) hot springs so he can convalesce after cheating death. They bring Wiz along as well…Wiz being kind of a waste of Horie Yui.

After winning every game of rock-paper-scissors against an increasingly flustered and desperate Aqua, and using Darkness’ vitality to heal Wiz (who was blown up by Vanir, long story) the party heads off aboard hired wagons in a beautifully-shot scene that is played straight.

Naturally, I was expecting something ridiculous to kill all the good normal vibes before the convoy left the city walls, but surprisingly, nothing happens! 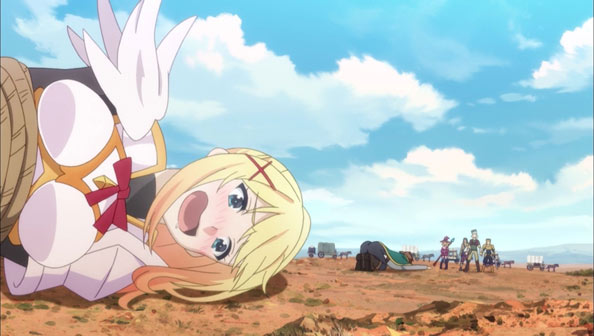 Instead, the ridiculousness happens en route, as a flock of ground-based birds known for stampeding toward the hardest objects they can find in a chicken-like mating ritual target Darkness.

I liked the fact the convoy had its own party of adventurers to take care of any problems, but once Kazuma learns it’s their—or rather Dark’s—fault the birds are there at all, his party mobilizes.

Or, I should say, Darkness runs out to meet the herd, a hired adventurer accidentally binds her, and…well, not sure what happened next, but afterwards Kazuma is apologizing profusely. Presumably, at some point, they’ll arrive at Arcanretia.

KonoSuba 2 is again in top-form this week, starting with a wonderful domestic scene of Darkness and Megumin trying to force Aqua to go outside with them, but she doesn’t wanna. She tries to deflect by calling them kids (even though she’s acting more like one herself) then wonders why they won’t ask Kazuma instead. Kazuma is relaxing under his kotatsu…wait, kotatsu? In this wonderful, alternate world? What gives? 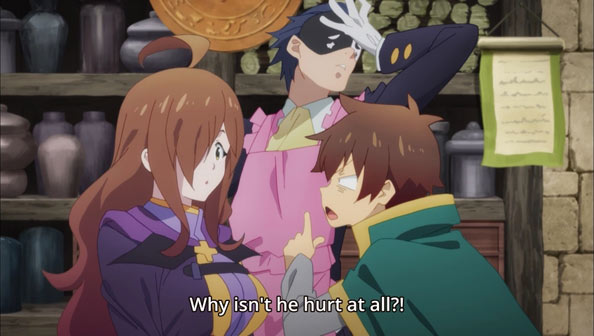 Vanir, as it happens, isn’t dead. He merely lost an extra life, and now he’s Vanir II. I got a big laugh out of that, and Vanir’s constant posing and amusingly over-the-top monologues. It wouldn’t be the first or the last of this episode, though the fact he and Kazuma are in business making items from his “homeland” (like said kotatsu) is an interesting angle, it’s not lingered on long.

Once he finally deigns to emerge from his cave, Kazuma heads to the weaponsmith to collect the weapon he comissioned: a katana. He also tries on some impressive full plate armor, but can’t move in it, and any attempts to look cool result in knocking other swords down, or whacking the side of the door.

He then has to give his sword a name, and of course all the usual famous sword names enter Kazuma’s head – Masamune, Muramasa, Kotetsu, etc. He lets his guard down, and Megumin unilateraly brands the sword Chunchunmaru, in keeping with her usual moe naming style.

His sword thus named, the quartet strikes out on a quest—I believe the first non-dungeon quest they’ve undertaken at full strength. There’s a certain triumphant quality to seeing the four out their, under the big blue sky, running their checklists and making sure they’re prepared to take on the vast group of Lizard Runners they’re tasked with taking out.

Naturally, any enemy in KonoSuba that is described as being “trampling” in nature will, ultimately, end up trampling upon one or more of Kazuma’s party, or indeed himself. I got a kick out of Aqua’s too-late advice and too-soon rash magic that brings the herd straight to their location. The lizards themselves were also hilariously twitchy and neat.

Kazuma manages to snipe the “Princess Runner” all the others follow, but when she lands she knocks him off the tree and he hits the ground hard. The injury is bad enough to land him in the hereafter with Eris, who he confirms is the true heroine of his story, if only he could spend more time with her.

He tries to do just that, but before long the voice of Aqua permeates the realm, getting increasingly worried and upset Kazuma won’t wake up. Darkness and Megumin also chime in, with the latter doing something to his body that leaves him no choice but to return to them. Maybe he’ll see Eris when she “sneaks out” one day? Probably not.

Everyone is clearly very glad Kazuma is back, underscoring the familial bond the four share, despite (or because of) all their bickering and sniping.

And that ‘something’ turns out to be labelling his dick “The Holy Sword Excalibur”, which he doesn’t realize until he takes a bath back home. In his shock he runs out to find Megumin, and loses his towel, leading to the priceless reaction shot of Aqua you see above.

This week delivered laughs both clever and dumb from start to finish. I daresay KonoSuba has fully re-attained my interest, and I’m looking forward to what’s to come next week. 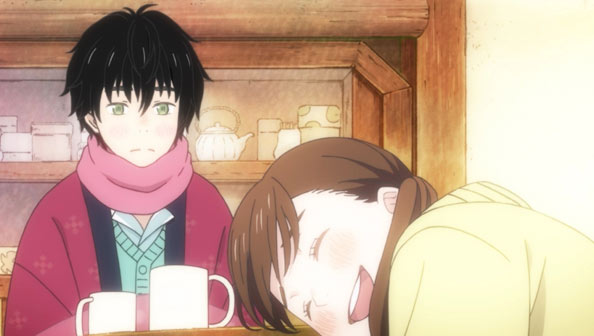 I watched this episode in a similar environment to the one Rei keeps finding himself in after recovering from his illness; a place very hard to leave once you’re there, like a kotatsu. It’s currently 20 degrees F and snowing outside, but I’m nice and toasty in my apartment with a hot mug of cocoa, and because it’s Saturday and I don’t have a possibly career-defining tournament to participate in, I’m more than content to stay right there!

Now that he’s better, Rei has some serious things to consider. Chief among them is ‘not losing anymore this year’, including the huge highly-publicized Lion King Tournament. He just barely defeats one opponent (who has a bizarre way with words), and may well have to go up against Gotou, the guy who calls Kyoko a “stalker girl” and who once beat him up. If it wasn’t for Smith, he’d have gotten beaten up again. 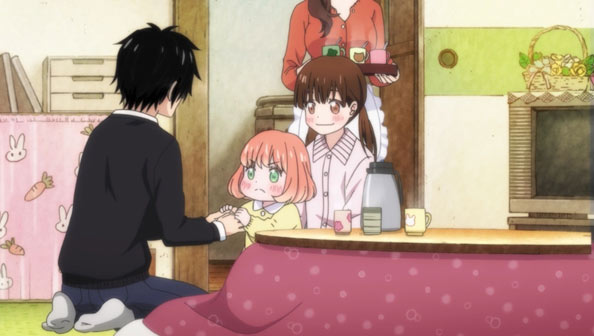 Instead, he heads to the Kawamotos with bags bursting with freshly-caught fish from the association president, and Akari couldn’t be happier, as it means they can save on food expenses for a while. As usual, the home is warm, fuzzy, full of love and hard to leave…but Rei has to leave. He can’t be the best shogi player he can be if he doesn’t go home and study. So he tells Momo as earnestly as he can, and she and Hina tell him to do his best.

Perhaps like no previous episode, this one really strongly marked the contrast between the Kawamoto Kotatsu and the world outside, using every visual method at its disposal. As bright and warm and colorful as it is in the sisters’ house, it’s dark and cold and bleak, even threatening outside.

But Rei is determined to become someone who can live in both worlds, and neither be trapped in one or unable to endure the other. Joy and pain are both inescapable parts of life he must learn to balance. And the beast inside relishes the potential opportunity to deliver a blow or two to Gotou, not with his fists, but on the shogi board.