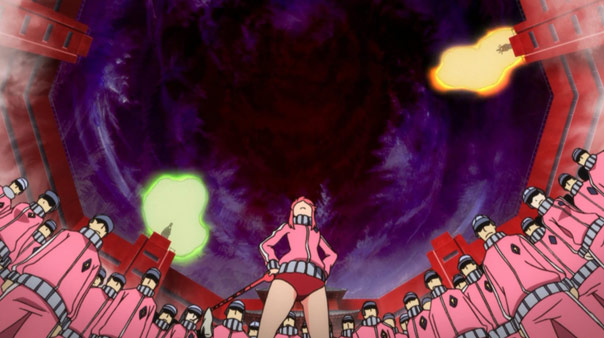 This week chronicled the threefold raids on Kobe, Kyoto, and Osaka by Gamagoori, Jakuzure (with Inumuta), and Sanageyama, respectively, and it’s a thrilling powerhouse of an episode. The Honnouji forces, enrobed in Goku uniforms and supplemented by shards of Senketsu, come up against stronger resistance than we’d foreseen, and that resistance comes in the form of the cities’ unique cultural attributes—distilled and amplified to a ridiculous degree, of course.

Kobe’s defense is bolstered by students in American football armor, tanks, and Kobe beef; Kyoto is protected by illusion-conjuring sorcerers, and Osaka is under the control of a powerful conglomerate like Kiryuins, which uses cash to mobilize every man woman and child in the city to resist Sanageyama’s onslaught. Mako ended up in the Osaka contingent, and she quickly shirks her duty to explore Osaka’s abundant culinary bounty. 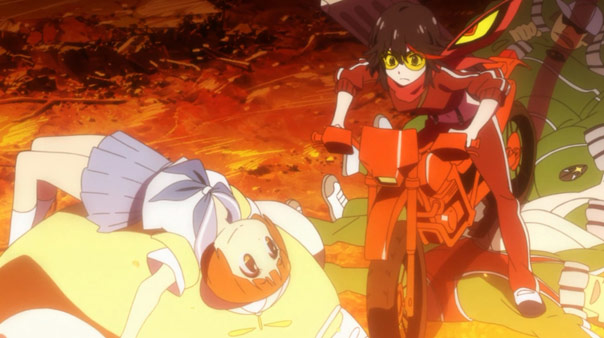 As Satsuki said to them earlier, the Elite Four’s loss to Senketsu was merely a rite of passage; something that prepared them for the campaigns they’re now heading up. It’s clear from the relish with which they press their attacks that they’ve all got their mojo back, and it’s fun to see them in action again, even if they’re ostensibly the bad guys. That brings us to the good guys: Mako is just goofing off, so what’s up with Ryuuko? Well, that small scrap of Senketsu she managed to hold on to happened to be his eye, and he can still communicate with her.

Much to our delight, Ryuuko doesn’t spend a whole lot of time sulking at rock bottom, donning a sweet tracksuit and red motorcycle, crashing the three already gloriously chaotic battles, and snatching back every last scrap of her friend. In the process she demonstrates that even with just a scrap of Senketsu round her neck, she’s become a formidable warrior. The last piece of him left is naturally on Satsuki’s person, setting up their next one-on-one confrontation. It should be a good one.