If it wasn’t clear last week, it certainly is now: things are going to get a whole lot worse before they get better. Ash is in custody, on his way to New York. Eiji and Shorter are already there. Shorter is injected with Banana Fish and comes to think of Eiji as the manifestation of all his worst fears.

Eiji just manages to escape becoming just another one of Dino Golzine’s sexual conquests (he’s called away by Ash’s arrival). Yut-Lung, like Ash, is far more willing to get on with it for the sake of survival, and tells Eiji he should start thinking that way if he likes breathing.

Dino has a bit of a flair for the theatric, and so dresses up all of his hostages in black tie for a sumptuous dinner before getting to the “main event”, Ash having to watch Shorter kill Eiji with a knife. This is all just thoroughly unpleasant, especially with the younger Dawson brother doing his Mad Scientist thing and Arthur smirking and laughing through it all, having a blast.

The only—and I mean only—two glimmers of hope for any of the “good guys” are Yut-Lung escaping from the bedroom (though he doesn’t do anything this week, he only watches) and Shorter’s and Ash’s gangs deciding to join forces to spring their leaders. 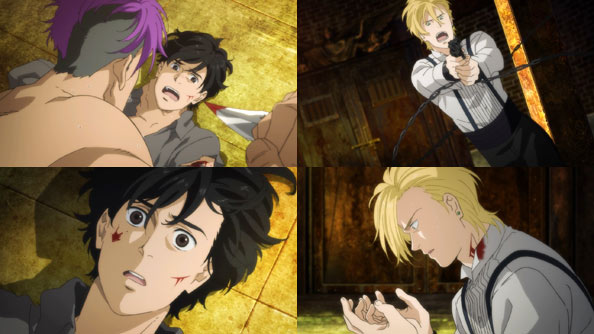 But those glimmers of hope are too little, too late, as Ash’s chains are loosened and he’s given a gun with one bullet. He shoots Shorter before Shorter can kill Eiji, and to add insult to injury, Dawson drags Shorter’s body away to dissect his brain.

If it wasn’t already obvious, Ash and his misfit friends are so far out of their depth it’s not even funny (except to Arthur, who finds all of this hilarious.) It sucks to see Shorter go, and awful to see it happen by Ash’s own hand.

Now he, Eiji, Ibe and Max will have to hope either Yut-Lung makes a move on Dino, and/or Ash and Shorter’s men can turn the tables. But it is not looking good at all for our brash, handsome, precocious young gangster.

Ange arrives aboard the Libertus flagship and mobile HQ Aurora, with her knight, filled with flowery ideas about convincing her former Arzenal comrades to join forces with the DRAGON to put out the Light of Mana. Unfortunately for her, Jill isn’t going to fight with people she doesn’t trust, and she sure as hell doesn’t trust the DRAGONs; nor does anyone else aboard the sub. Why would they, after all the death and destruction their raids caused?

The Aurora is shiny and bright and being run just as Arzenal was, but I’m glad the episode shows us that wasn’t always the case. Seeing the state of the Arzenal survivors when they first set off, it’s not surprising that if Jill kept them alive they would rally around her cause, even if the odds were hardly in their favor.

Jill held the crew together…well, most of them; Salia, Ersha, and Chris deserted and joined Embryo, which will prove telling later in the episode. I was also glad for the “slice-of-life aboard a rebel submarine” after. Momoka’s role as ship’s cook; the three bridge girls becoming mail-riders; a drunk and depressed but still grateful Emma; and especially Hilda, who’s really happy Ange is back, and even happier she hasn’t slept with Tusk yet. Hilda and Ange have had their spats, but they’ve come out of it all as something resembling friends, and it’s clear Hilda wouldn’t mind if they became something more. 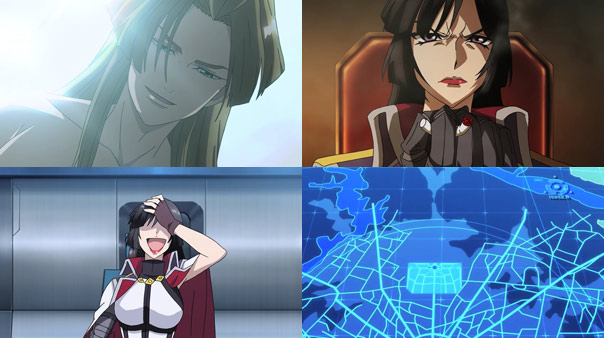 But I knew something about Jill’s mission is off, and we should have seen it coming when Roselie, one of the most oblivious and least informed characters on the show, says “Jill is only one we can trust in the world.” An enraging memory of being beneath a nude Embryo seals it: liberating the world isn’t as important as her personal vendetta, which twists into an obsession within the cramped confines of the Aurora. Whenever she says “Libertus”, she’s actually referring to her own selfish whims.

She tells Ange she’s changed her mind about working with the DRAGON, but only to use them as cannon fodder, one more tool to reach her goals. Ange refuses to obey, but Jill is ready for that, having endured the bitter taste of the princess’s insubordination many times before, by threatening to toss Momoka out of an airlock if Ange doesn’t fall in line. And now we know: Jill has become Admiral Cain.

But, again, it’s all because of Jill. The other Arzenal elders didn’t know about the hostage, nor did they know how bad Jill’s obsession had grown. Because this isn’t just about her killing Embryo for some wrong he perpetrated against her. This is about righting the wrong that was her failure. She failed as Vilkiss’ pilot, but she can save face if she makes Ange succeed for her. It doesn’t matter to her anymore how many of her own people or how many DRAGONs have to be sacrificed.

Jill recovers from the gas and blocks Ange’s path, but Ange puts the still-woozy ex-commander down with a slick-looking kick, obviously the product of her military and athletic training as princess. Ange’s response to Jill’s scheming: “No one knows what’s right…But I hate the way you get things done!” She then takes to the air with Tusk, Momoka, and Vivian, and enjoys the gorgeous blue sky and warm sun, and even flashes a cute Nausicaa pose before Ersha zooms into range…and not to say “Hi.” 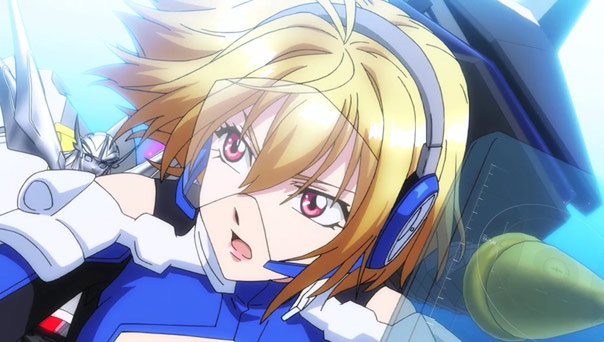 Ange decides she’ll destroy Embryo herself, in her own way. Jill is right that Ange has been through all kinds of hell and torture and has every right to want to destroy the world, regardless of who’s giving the orders. But Ange has changed. She wants to create a world where she can look Momoka, Vivian, Salako, Hilda, and Tusk in the eye without the shame of having used them as tools to satisfy her thirst for revenge. She wants to protect and preserve, not exploit and punish.