Episode five is talky, like the previous four, but the quality of the conversations ticks up thanks to a generous helping of light humor and a few significant steps forward with the plot, as the “good” creations add mecha pilot Kanoya Rui to their ranks and forge an official alliance with the Japanese government. 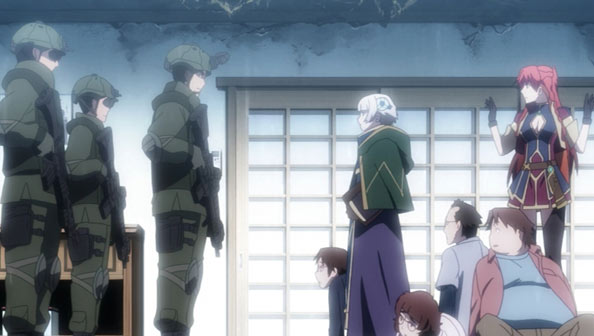 Things are lighthearted at first, as Kanoya proves to be very mild-mannered when not riled up, then things get tense as the JSDF raids the home of Kanoya’s creator. This is where I came to appreciate Meteora as the official spokesperson of the creation/creators. Measured and precise in her words, she’s able to calm the situation and put the soldiers at ease. None of the others in that house could have done it better.

They end up before a board of government bigwigs called the Special Situations Countermeasures Council, and briefed by the council’s General Coordination Officer, Kikuchihara. The proceedings are understandably a bit stiff, but things are lightened considerably when Kikuchihara informs Meteroa of the missing JSDF weaponry she “borrowed”, for which she can only offer a sheepish but sincere apology.

Fortunately, Kikuchihara is a stabilizing force, like the Meteora of the bigwigs, and has an open enough mind to appreciate the creators and creations’ situation, while acknowledging the former’s status as persons, offering them legal status and government protection.

Their shared goal of fixing what the Military Uniform girl broke and returning everyone to whence they came is sure to go easier with the coordination with Kikuchihara and the council.

Despite likely being offered government-funded accomodation, Meteora and Celestia decide to remain at Marine’s house, which is just fine with her, as it’s made her home life more fun, as “every night is girl’s night”, as Meteora puts it.

The four guys (one of whom, Kanoya, is voiced by a girl) aren’t as enthused, as Kanoya’s creator’s house was destroyed, but of far greater concern to Souta is his sudden realization of the origin of the Military Uniform girl: it would seem her creator is Shimazaki, who took her life by jumping in front of an incoming train at the very beginning of the first episode.

It makes sense that Military Uniform girl is trying to overthrow/destroy the world of creators, considering it’s a world that essentially rejected her creator. Hopefully more will be revealed about Souta’s specific connection to Shimazaki. Until then, some nice incremental progress was made, with just the right amount of comical flair to avoid things getting to stodgy, but enough seriousness to maintain credibility.