Kurusu Kurogo loves kabuki. He loves it so much and thinks it’s so fun and free, he wants to start a high school kabuki club. When that fails, he tries to start a kabuki school “group” instead, but needs a minimum of five members. Kurusu and his friend Murase Tonpo set out attempting to recruit three more. They do not succeed.

First is Akutsu, who has kabuki in his blood but would rather play back J-rock to a small flock of groupies; Niwa, an accredited and former child prodigy of dance who now looks like a beat-up boxer; and Asagi, who not only has his own thing going on with drama club (and an entire segment of underclassmen assigned to serving her), but isn’t a he, but a she. Finally, they find an actual, real-life kabuki performer with a stage name in their same grade. 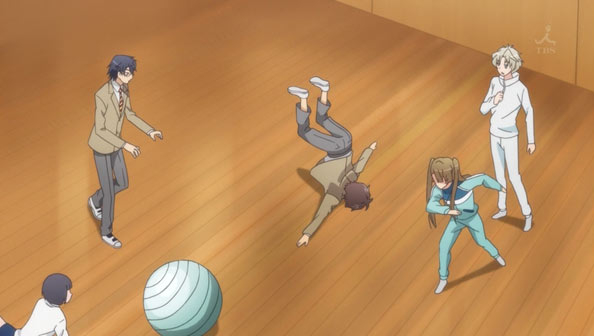 I applaud Studio Deen for taking another traditional Japanese art form and trying to give it extra exposure by putting it in a currently far more popular Japanese art form. It did so with rakugo with immense success…but it strikes out here. It’s all in the execution: this feels like one more by-the-numbers obscure club in danger of never existing or being shut down. The trappings of kabuki are just that: trappings; window-dressing. We only catch the slightest glimpses of the world. 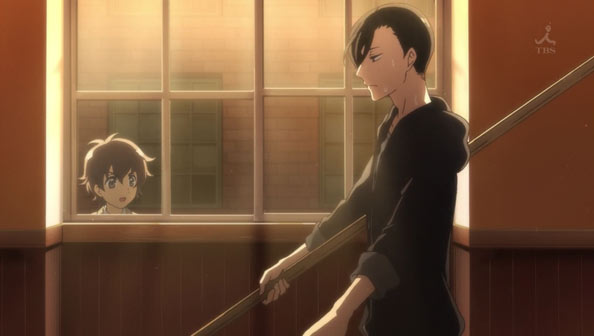 The MC himself is just a tourist, and one of the reasons he fails to recruit anyone (besides the obscurity of his passion) is that his arguments for why kabuki is so great feel so hollow. As reluctant and recalcitrant as his would-be recruits are, you can’t really blame them: they feel less like people Kurusu wants to share his passion with and more like pawns to fill a quota. He just met them all, after all; why does he expect any of them to drop what they’re doing and join his club with such weak sales pitches?

So yeah, while I personally like kabuki (though have only seen it live once), I did not like Kabukibu! Even the title grates; it sounds too much like peekaboo. 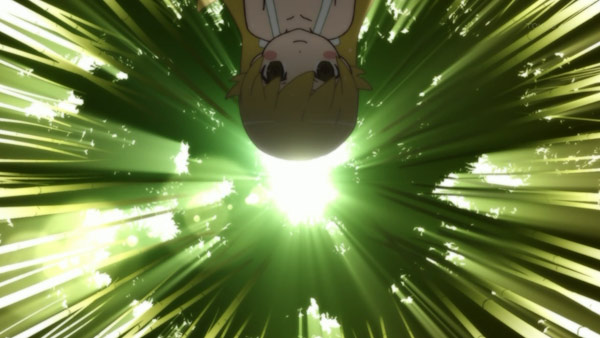 At school, Araragi Koyomi‘s classmate Oshino Ougi waxes whimsical about the contradiction between red signs warning of danger being safer than green signs indicating safety; it makes him think of how Hachikuji Mayoi was killed by a truck ten years ago. Koyomi then runs into Ononoki Yotsugi, who has been dispatched to the town for unknown reasons. Back home, Oshino Shinobu points out that Koyomi hasn’t done any of his summer homework. With just two hours until class starts, he asks her to build him a time machine. Instead, she takes them to a shrine where she opens a portal to an alternate dimension. They jump in, and rather than emerging the previous day as planned, they end up eleven years, three months and seven days in the past, with no reliable way back.

Kabuki is typically used as the term for classical Japanese theater (or improperly used to describe intricate political maneuvering) but is also derived from the verb kabuku meaning “to lean”, or “to be out of the ordinary”,”avant-garde”, or “bizarre”. while kabukimono is a term for “someone bizarrely dressed and swaggering on the street”. Furthermore, kabuki’s individual kanji mean “sing”, “dance”, and “skill”. True to its highly versatile (and open to interpretation) title, this episode caters to all the possible definitions. Like every Monogatari episode, the style is very avant-garde and bizarre, with intricate, often poetic or singsong dialogue and characters striking poses in an vaguely kabuki-esque manner. Oshino Ougi has a white, stylized face reminiscent of a kabuki mask.

Officially, Kabukimonogatari means “Slope Story”, continuing the theme of being off-kilter or less-than-straight, and also calls to mind the proverbial “slippery slope.” Case in point: Koyomi wants to go back one day so he has time to do his homework, and puts his trust in Shinobu, who doesn’t reveal it was her first attempt until after the fact, and Koyomi gets a lot more time than he needed. If his present is 2013, they’ve gone all the way back to 2002. Ougi tells Koyomi “If you don’t want to face danger, don’t cross any crosswalks”. But he’s never been one to avoid danger. Now he finds himself in the past, with the chance to stop Mayoi from losing her life while crossing one. It’s a solid start to an intriguing new adventure.