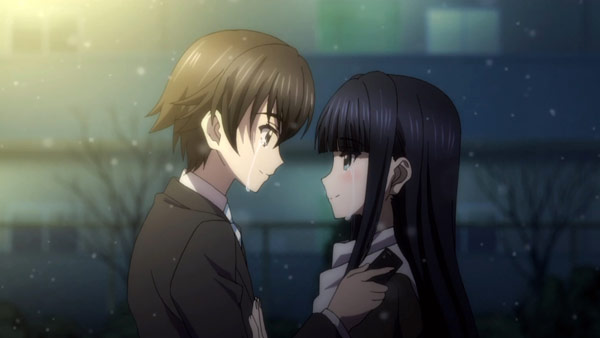 Touma tells Setsuna she’s moving to Vienna. While on the school rooftop, Setsuna tells Io how she “jumped in the middle” between Haruki and Touma, even though she knew about Touma’s feelings for him. On graduation day, Setsuna tells Haruki Touma left her a note. He goes looking for her, without success. Later that night Touma finally calls him, and he finds her right outside his building, where they embrace, call each other by their first names and kiss.

Setsuna admits fault for snatching Haruki from   Kazusa, but it wasn’t really much of a surprise that she knew Kazusa liked him, and was even there when Kazusa kissed the sleeping Haruki after the concert. But in that moment, Setsuna, having fallen for Haruki, couldn’t be blamed for taking the course of action that would lead to her happiness. It was as much an act of desperation as it was pragmatism. Her happiness at his saying yes overpowered her sense of loyalty to Kazusa.

Of course, Setsuna also happens to believe Haruki only accepted her confession because he was thinking of her feelings before his own. But as we look at how things eventually turned out, we can’t discount the possibility Haruki and Kazusa may never have gotten anywhere were it not for Setsuna. It took Kazusa losing Haruki to Setsuna—and Haruki nearly losing Kazusa to Vienna—for the two of them to fully grasp how deeply they felt for one another.