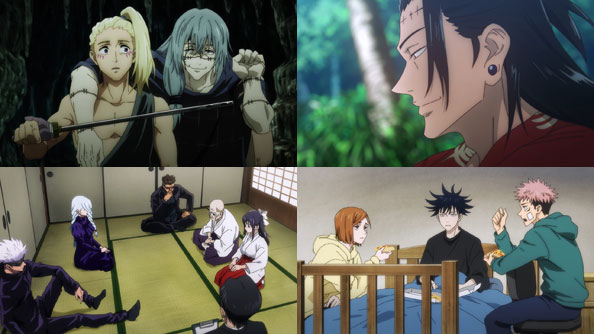 Guy with the sword with a hand for the grip—who I’ll just call “Guy”—is retreating from the academy through an underground tunnel when a severely injured Hanami smashes through the walls. Guy is ready to put Hanami out of his misery when Mahito appears, telling him that as a human he shouldn’t act alone.

Back on the beach, Hanami and Mahito rejoin Jougo and Getou (and … er … Zoidberg? is still swimming in the ocean). Getou explains to Jougo how Mahito was able to get past the academy barrier maintained by a sorcerer named Tengen: by placing a charm made of Mahito’s Cursed Energy on the finger of Sukuna they collected.

Suffice it to say, thanks to the successful raid on Jujutsu High, their plan is right on track, with Getou setting October 31 and Shibuya as the day and the place they want to unleash the “bomb” that is Sukuna. Meanwhile, the higher-ups of Tokyo and Kyoto meet and agree to keep the theft of the special-grade objects a secret among them, still unsure what the enemy is about to achieve.

We then shift to the infirmary where Yuuji and Nobara are visiting Megumi and eating pizza. This is a momentous occasion, because it’s the first time since Yuuji came “back from the dead” that the three friends have been able to simply kick back! So of course “Big Bro Aoi” has to muscle his way in, leading to him chasing Yuuji around the academy campus. 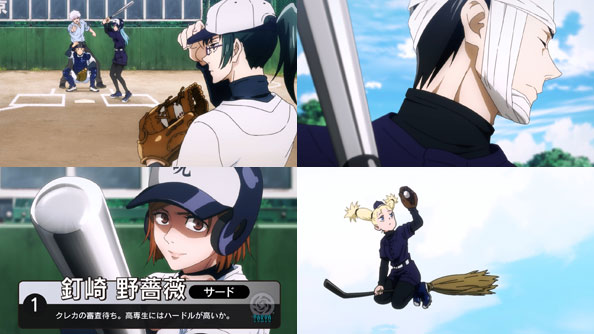 That brings us to the question: What of the Exchange Event? Rather than be cancelled, everyone agrees it should continue, though with the group event of the first day over, most expect the second day to take its typical form: individual battles. However, when the form of competition is drawn from a box, it’s baseball, so we get a baseball game!

I love baseball, particularly the unique style Japan brings to the game, so I was fine with this! Maki, as you’d expect, can both pitch and hit at an elite level, while Nobara can man the hot corner and beat out a grounder. Kamo Noritoshi (who really should be wearing a helmet) uses the opportunity to speak to Yuuji, who until a few hours ago he was trying to murder.

When Nori hears that the reason Yuuji became a sorcerer, he’s surprised to find it largely matches what his own ostracized mother said to him before they parted ways: save a lot of people so they’ll help you in turn, or even just be with you at your end. After a Nobara hit (off a Mechamaru pitching machine) and a perfect sacrifice bunt from Megumi, Maki socks one out of the park, only for the flying Momo to catch it—which is allowed because they’re short on players. 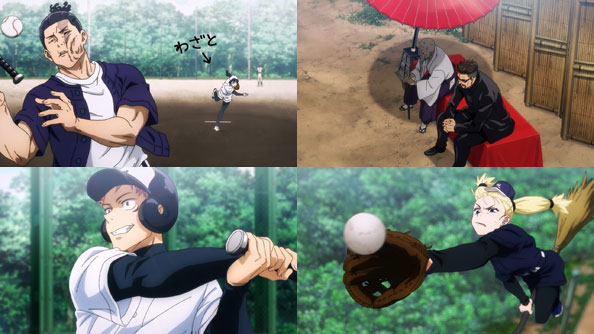 Maki gets her revenge when Aoi steps to the plate, beaning him as he’s telling Yuuji how he hopes he’ll pitch to him someday, which…there’s just no way to say that without it sounding like something else entirely. (Everyone casually saying “Nice Pitch!” when Maki plunks Aoi is *chefs kiss*.) When Yuuji comes to the plate, the two principals discuss the Yuuji conundrum. The strict interpretation of their laws says he shouldn’t exist, and Gojou’s selfishness kept him alive at the cost of many lives.

At the same time, there’s no denying that Yuuji’s being alive has saved lives that would have otherwise been lost. They tentatively agree to simply continue watching him as they weigh the pros and cons. After all, if they kill him for good they can’t undo it…again…I presume! It’s fitting that Yuuji is the one to hit the homer that puts Tokyo up 2-0, which ends up being the final score thanks to Maki’s lights-out pitching.

The show proved that it can animate baseball (or at least baseball-ish) action just as impressively as it does its battle scenes, while the on-screen graphics were full of great jokes, like the fact that Mei totally stole the ripe mango Kasumi was saving from the fridge…and that despite being able to actually say the word “rice”, Inumaki prefers bread for breakfast.

If there’s one mild complaint I have about Jujutsu Kaisen, it’s that the main trio have been apart more than they haven’t. The preview indicates Yuuji, Nobara and Megumi will be working next case together, which is just what I was hoping for as this second cour starts to wind down. 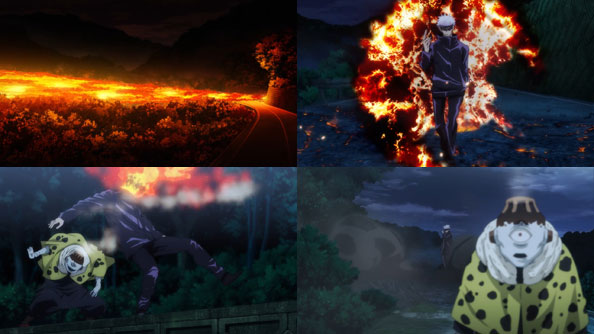 I’ll say this for Jougo, AKA “Volcano Head”: he’s a confident sonofabitch. Ambushing Gojou on a deserted roadin the night, he immediately engulfs him inflames, only for Gojou to emerge unscathed. Even when Jougo is sure he’s touching Gojou, he’s really only touching the “infinity” (mugen) between himself and Gojou. The closer Jougo’s hand goes into that infinity, the more that hand slows down. It’s like an invisible suit of impenetrable armor. 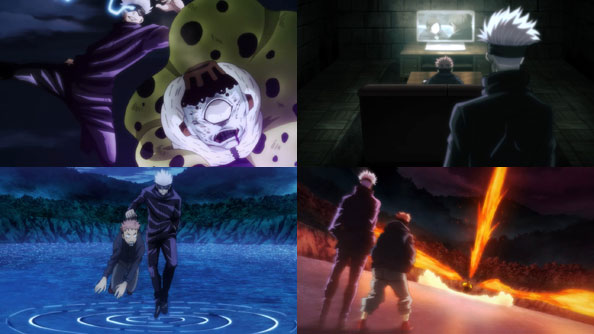 It’s extremely irritating to discover that not only is Gojou far stronger than Jougo imagined any human could possibly be, but Gojou has no problems whatsoever blatantly demonstrating the sheer chasm in power between them. Gojou is even able to stop by the school bunker and smuggle Yuuji out (while he’s in the middle of Lord of the Rings) so he can observe a high-level battle between a special-grade cursed spirit and the world’s strongest Jujustu sorcerer. 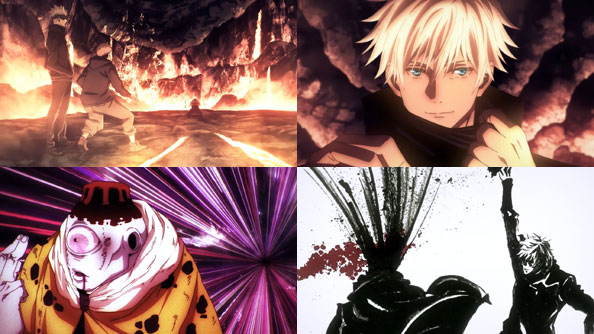 Jougo’s smoldering frustration is ably expressed by veteran seiyu Chiba Shigeru, as the spirit uses “Domain Expansion” to create an Innate Domain around himself, Gojou and Yuuji. Were Gojou not there, Yuuji would have probably died (again), but while the domain looks hella cool, it doesn’t do much against the sorcerer, who then easily nullifies it with his own domain, Infinite Void. He achieves this by removing his mask to reveal surpassingly piercing blue eyes. 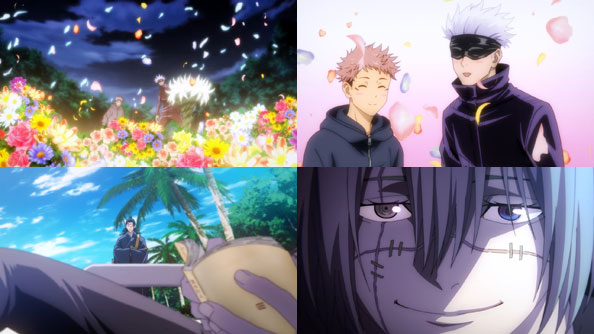 While Jougo isn’t about to tell Gojou anything about who sent him, he’s in very real danger of being exorcised. Getou, who was watching from afar, leaves it up to the Groot-like Hanami to save Jougo, and he does so by conjuring a huge field of beautiful flowers, then grabbing Yuuji with a vine, forcing Gojou to rescue him while Jougo escapes.

Getou, Hanami, and Jougo all meet back up at what is apparently the cursed spirit boss’s beach hideout, and we meet their apparent boss, the stich-faced, odd-eyed Mahito. Jougo may be a hothead, but with cooler and more powerful heads among the baddies, Gojou and Yuuji shouldn’t rest easy. For his part, Gojou intends to personally spar with Yuuji in between movie viewings so he’s ready to dominate in the Kyoto Exchange Event. 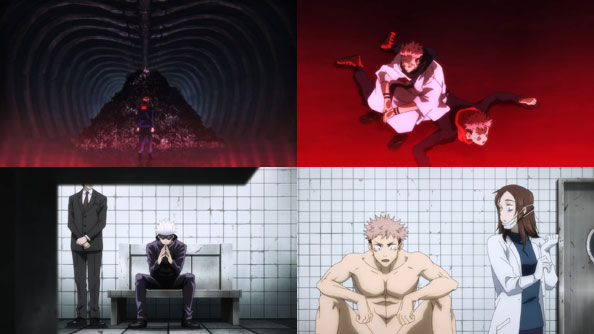 I wondered how long JK would dare go on insisting Yuuji was dead, but it turns out not long: he’s revived in the first seven minutes of this episode. Turns out he was being kept alive within Sukuna’s Innate Domain. In what is basically his mind, Sukuna lets Yuuji challenge him to a duel. If Yuuji wins, Sukuna will heal his heart without conditions.

If Sukuna wins, there will be conditions, like him being able to take over Yuuji’s body for a minute whenever he says “Extension”. One of those conditions is that upon waking up, Yuuji won’t remember what conditions he promised to. We never learn who won the duel, and Yuuji wakes up just seconds before Ieiri Shouko begins the autopsy. 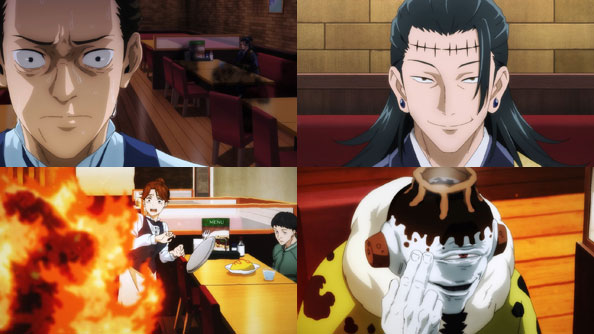 Meanwhile in an unassuming Tokyo café, the sorcerer/priest guy whose name we learn is Getou continues his chat with the Curse Jougo. One of the waiters flees the café before shit goes down…and shit does go down, with Jougo sets everyone in the café on fire and leaves them to die horrible deaths…just ’cause he feels like it.

Getou estimates Jougo’s power to be equal to roughly eight or nine of Sukuna’s fingers, meaning at this point in time he’s presumably three times stronger than Sukuna!Yuuji. He also recommends the use of the special-grade cursed object, Prison Realm, to seal Gojou’s power away. Jougo takes Getou up on that. 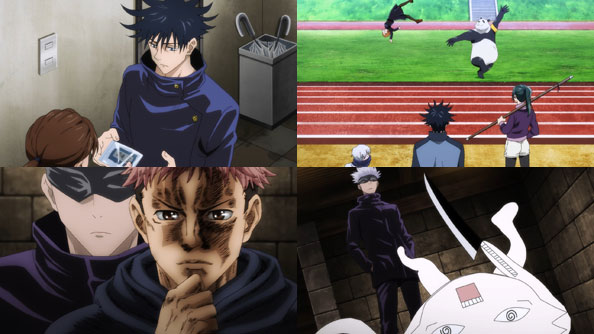 After visiting the dead inmate’s mother and presenting her with his nametag as proof of death, Megumi joins Nobara and the upperclassmen on the school athletic field to train for close combat and other forms of battle neither of them are accustomed to. If nothing else, Maki, Inumaki and Panda seem to be doing a good job keeping the first-years too busy to be sad about Yuuji’s death.

Of course, no one knows Yuuji is alive except for Gojou, Ijichi, and Ieiri, and Gojou intends to keep it that way. He’ll train Yuuji in how to maintain cursed energy levels in preparation for the Kyoto Exchange Event, but won’t reveal that he’s still alive until he makes his appearance there. That’s not just for dramatic effect; it’s so those who “tactfully” arranged for Yuuji’s death at the detention center, including the Jujutsu brass, can’t target him again before he’s ready. 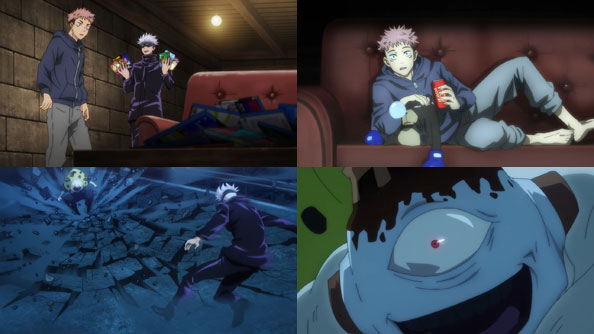 And ready is what Gojou intends to make Yuuji. Using the innovative method of spending all of his waking hours watching movies while accompanied by one of the principal’s cursed dolls, who will punch the shit out of him if he doesn’t maintain a constant stream of cursed energy—not too high or too low. Being able to maintain that stream even under duress is key for someone like Yuuji who, at least for now, doesn’t have any cursed techniques.

Gojou leaves Yuuji in his isolated bunker to train up, but in the middle of his ride home he tells Ijichi to stop and he gets out of the car. Not long thereafter he’s ambushed by Jougo, who knows he needs Gojou out of the picture if the grand plan of replacing humans as the dominant species on earth is to come to fruition.