With Arthur back, Hibana hanging around feeding Shinra, and Tamaki joining the 8th, the company has never seemed livelier, as noted by both Captain Oubi and Lt. Hinawa. Shinra and Tamaki join those to for a meeting of all eight company Captains before the Emperor of Tokyo.

This is made out to be such a big deal that there hasn’t even been such a meeting the whole time Oubi has been a captain, but like Rail Zeppelin’s Mystic Eyes auction in another show, the actual event itself is pretty underwhelming.

We get a quick peek at all the captains we’ve seen before, but nothing that’s discussed in the meeting couldn’t have been said in a phone conference or email thread. Basically, the emperor wants all the companies working together to find and stop the Evangelist.

What of Shinra? One thing Hoshimiya wasn’t lying about is that Shinra’s flames are what’s called an Adolla Burst, an extremely pure form of flame identical to the ones that power the Amaterasu power plant, as well as those that created the world in which they live (how flames create things, I do not know). 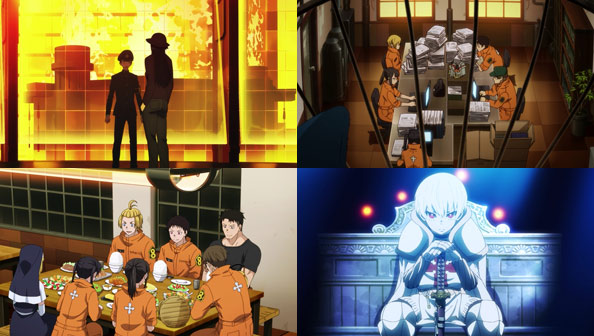 In any case, the captain of the 3rd Company wants to “secure” Shinra (i.e. make him a test subject) since the Evangelist is likely after Adolla Bursts like his. Oubi manages to assure everyone the 8th will continue to keep him safe, though right after saying that he leaves Shinra on his own.

The Joker shows up, but not for a fight. He tells Shinra that his brother Shou is not only still alive, but is the commander of the “white-clad” Knights of the Ashen Flame, who serve the Evangelist. After acting sullen and awkward for most of the day back at the station, he finally tells the rest of his company mates after a family meal.

Even if I’m not super-excited about Shinra having to go up against the brother he once thought to be dead (this kinda angle is done to death), what I did like about this episode is that it re-established the 8th as one big family, and I liked the warm quiet scenes where they’re all just working or eating.

I’m also glad Shinra didn’t keep the news about Shou secret, due in large part to the sense of family and trust he feels from everyone…even Arthur.  As for how Tamaki suddenly ended up naked but for a pink apron when she and Maki tried (and failed) to start dinner…I’ve got nothin’.

Enen no Shouboutai took a week off out of respect for the victims of the Kyoto Animation fire. There was probably never going to be an ideal way to return to regularly scheduled programming, but it felt particularly awkward to frontload the first episode back with repeated accidental gropings of poor hastily-introduced Kotatsu Tamaki, the show’s new resident Revealing Outfit Girl. I could forgive the empty fanservice if the episode had better points to focus on…but sadly, it didn’t. 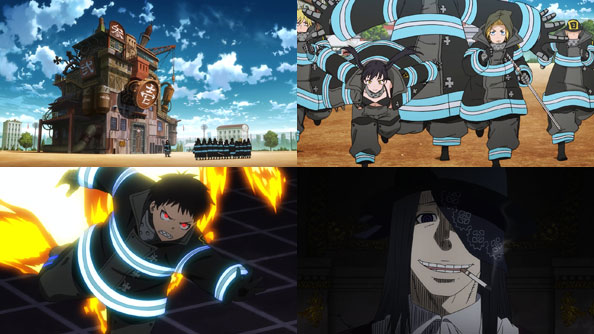 What this disjointed episode did have was a whole lot of plot and table-setting. The Rookie Fire Soldier Games begin with all the fanfare of a quaint high school sports festival, but the episode abandons the games almost as quickly as it introduces them, by taking a sharp right onto the tired “Evil Clownlike Villain” road, introducing “Joker,” a name I think we can all agree is not the most imaginative.

When Shinra enters the building, Joker is assaulting two fire soldiers. He also threatens to kill Shinra, but also offers him the chance to join him, becoming a “devil” instead of a “hero.” This doesn’t fly too great for Shinra, partly due to his lifelong dream to become a hero (not a devil) and partly because the Joker assaulted two of his comrades. The two duel (Shinra’s no match for Joker), Arthur and Tamaki pitch in a bit (neither are they) and Joker fills the building with highly explosive ash. 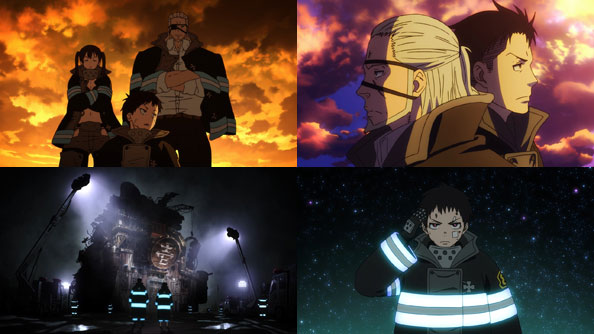 Shinra grabs Arthur, Tamaki and the two injured soldiers and flies out of a hole in the roof. Tamaki’s captain praises Shinra, but doesn’t offer any more info on the circumstances of the fire twelve years ago. Joker hoped to lure Shinra to his side by sharing “the truth,” including the claim his brother, just one year old when he died, is actually still alive.

Some lengthy still shots filled with exposition from Captain Oubi later (seriously; the last five minutes are barely animated), we now learn the 8th Company has a mandate to investigate the other seven as part of an effort to uncover the truth of spontaneous human combustion, the explanation for which may already be known. Whatever their mission, Shinra wishes to remain on the hero’s path. We’ll see how hard Joker makes that.

With the Rookie Fire Soldier Games coming up, Captain Oubi has high hopes for young Shinra. But he’s not the only rookie assigned to Company 8. That’s right, it’s the Rival/Friend His Own Age Who Is More Like Him Than Not, Arthur Boyle, the self-proclaimed “Knight King.”

Maki and Iris are enjoying the nice day on the roof when the two prepare to go at it, but Lt. Hinawa puts an end to both Maki’s idle fire manipulation (technically against regs, but he’s a stickler) and the attempted duel. Instead, he rearranges the fight so Shinra and Arthur have to go up against their senpai Maki.

While both third-gens are unconcerned about taking on a second-gen, Maki’s military training, experience, wonderful muscles, and most important, her ability to manipulate the flames of others means both guys end up taking quick losses.

Maki may be a little self conscious about her “ogre gorilla” alter-persona, but there’s no doubting her toughness despite not being the latest generation of pyrokineticist. If Shinra’s a devil and Arthur a knight, she’s a witch—and a very accomplished one, at that.

Taken down a few pegs, Shinra and Arthur shift their battle to see who can eat the ramen Oubi treated them to faster…which is not the point of eating delish ramen. There’s also a mention of how much gear a non-user like the captain has to wear (and Hinawa has to maintain) for the job, while Arthur’s Excalibur and Shinra’ feet and Type 7 ax are sufficient for them. Speaking of which, the alarm sounds and the now five-person Company 8 answers the call.

The scene is eerily quiet but the Infernal is inside, the father of a girl who already lost her mother to “infernalization,” and dreads being next as a matter of genes (though it could just be a coincidence). When Shinra and Arthur take out their weapons in public, they are scolded by Oubi. The Infernal they’re about to fight was a human, with family. It’s not a glorious battle, but a solemn funeral. If the rookies think otherwise, they can leave the 8.

Oubi is proven right when they enter the house and find the girl’s infernalized father just sitting quietly at the table, the shrine of his wife nearby. Shinra wonders why they should attack an Infernal that isn’t doing anything, but Arthur corrects him: the person sitting there is in tremendous pain, and they must put him out of his misery.

As Iris says the prayer, all it takes is a single quick strike form behind with Arthur’s plasma sword to send the father to rest. A quick and dignified end, but no consolation for his daughter as she never saw it. 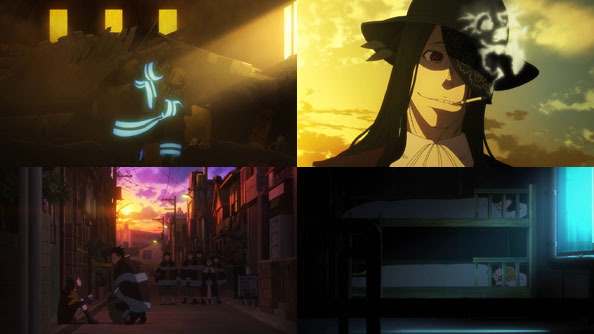 Before they went in, a cloud of flames above the house formed into a smirk, and after they defeat the Infernal, the house inexplicably comes tumbling down; fortunately Oubi is tough and isn’t injured, but he and Hinawa immediately suspect a third party that’s messing with their duties. Indeed there is someone outside among the crowd, who leaves smoke letters in the sky reading “Joker.” Huh.

Meanwhile, Oubi completes his duties by doing what he can to comfort the surviving daughter in her time of greatest despair. He posits that because his parents protected her so thoroughly from the flames, she’ll be safe form now on, even if they’re gone. The fire soldiers didn’t fight a battle this week; the Infernals did, for the sake of their daughter, and they won, because she’s still alive.

Neither Shinra nor Arthur can sleep that night (obviously they were assigned the same bunk bed), realizing that the academy could not prepare them for the most terrifying part of being a fire soldier: getting accustomed to what they do. But as much as they snipe and sneer at nip at each other, they’ve perhaps started to realize that they’d rather have one another by their side than not, to help deal with those solemn times.

Between gaining command the war giant The Fool, befriending da Vinci, fighting a seasoned foe to a draw, and becoming betrothed to the Queen Himiko of Yamatai, Nobunaga certainly seems to be amassing the means with which to make his own destiny, something he imparts to his brother is crucial to living life.

As his father and other clan leaders consider the benefits of their new alliance with Yamatai with regard to shoring up their defenses, and plans for a betrothal (not wedding) ceremony are underway, all Nobu wants to do is take his new regalia and stove in the heads of his enemies as soon as possible. “The woman is extra”, he says coldly. Nobu: Male chauvanist. 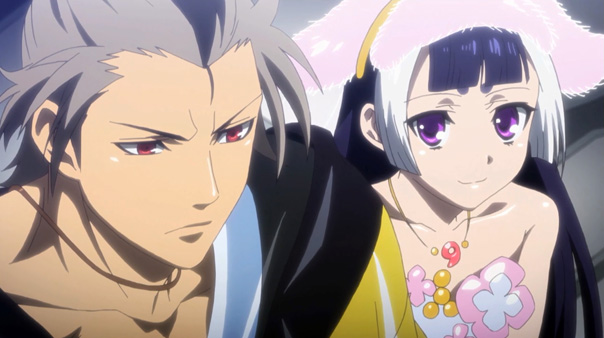 Himiko remember being lovingly tossed about by Nobu as a child, and so sought him out for marriage as soon as she was able. Beyond the puppy love, we sense some ambition in her: she’s forming a bond with someone she knows will be going places in the near future, while at the same time she’s a big part of why he’s going places, by giving him the regalia. Their ceremony itself is a mad marvel of excess and theatricality, blending both Eastern (kabuki stage) and Western (wedding gown) tradition and ending with the traditional cutting of the (ten-story) cake with a regalia-boosted katana strike.

Part of why everyone calls Nobu a ‘fool’ is the way he jumps headlong into things; his character also fits much of the symbolism of the tarot card of the same name, a card that inspired the modern Joker, which is often “wild.”  We’ll see whether these nuptials are win-win for all or have unforeseen ill-effects. We’re also curious to see if Jeanne, now believed by most (but interestingly, not Himiko) to be a dude, will continue to be sidelined. We’d like to see her pull a knife (figuratively speaking) on Nobu more often.