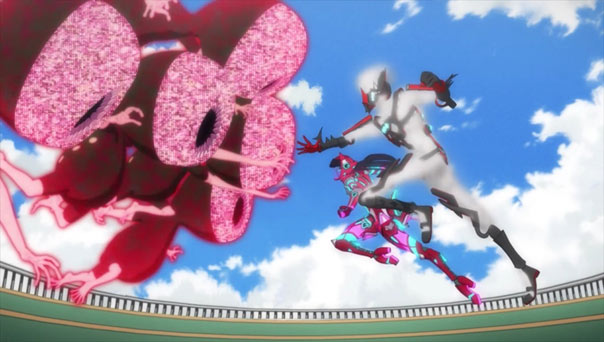 Well, that was weird.

After deploying in full force last week (save O.D.) and Tsubasa making her big debut on the battlefield, the Gatchamen find themselves at a crossroads. VAPE’s leader has been caught, and relatively easily, but then again, he doesn’t put up much of a fight. Why should he? He accomplished everything he set out to do. The Red Crowds were a menace. He suspects most people will think no differently about Blue Crowds.

A great blow has been dealt to Rui’s dream of updating the world. But not all Gatchamen are on board about that being their purpose. “We’re heroes”, Tsubasa says again and again about her and the rest of them; that means when Rui is in trouble, she came to rescue him, even though he didn’t want to be rescued. Joe and Tsubasa remain of similar minds: endorsing Crowds is not their top priority; protecting the people is.

While the Crowds have never been more feared by the public, opinion on the actual Gatchamen (and on Gelsadra) remains high, to the point Millio wants her and Tsubasa to be regulars on his TV show, perhaps ditching O.D. in the process. In an even stranger development, the Prime Minister resigns after the VAPE attack and calls for smartphone elections…again. This time, he makes it clear a vote for him is a vote for the continued presence of (Blue) Crowds in society.

While Gel is certainly a popular idol, she believes the best way for her to enact real change on Earth is by winning that election. When she’s told she’s just a little girl, she transforms into an adult man—heck, why not? She’s an alien! I’d say she has a decent shot at winning. Does that mean the Crowds will be put on the back burner, replaced by Gel’s different approach of “uniting minds” and sowing mass happiness? Will the rift between Rui and less pro-Crowds faction of the Gatchamen widen? Times suddenly feel very uncertain.

Tsubasa and Gelsadra are wrangled into appearing on the Millione Show where they show off their practiced jokes, then visit the drugged-out Gatchaman HQ for the first time, where Paiman is angry they went on TV. Tsubasa doesn’t see the problem; it can’t be a bad thing for heroes to appear on TV to inspire the people they protect. Ultimately Paiman is appeased when Tsubasa calls him “Leader.”

Tsubasa’s goals as Gatchaman couldn’t be simpler: be a hero who protects the people. That’s it. She doesn’t have any interest in “updating the world” or evolution, as Rui does. When a disturbing new prophecy from JJ portends a city “of teeming masses colored crimson”, and Rui informs the other Gatchamen of Suzuki Rizumu’s aims, Tsubasa more or less sides with Hibiki Jou’s objection to keeping something like Crowds around when there’s the potential for danger and even bloodshed.

Jou likes the newbie’s simpler, more realistic goals, and calls Rui’s determination “idealism.” This is the largest philosophical gap we’ve seen in the Gatchamen thus far, as Jou’s opinion isn’t all that different thatn Rizumu’s It’s also given credence when the prophecy comes true and the city turns red with great coordinated masses of red Crowds.

No less than six Gatchamen suit up, the largest deployment in insight so far, and while it’s great to see them start to take the fight to the red Crowds, it’s clear they’re woefully outnumbered, as usual. Tsubasa, meanwhile, is stuck on the sidelines since she can’t reliably transform, and before long, Rui meets Rizumu on a rooftop helipad, where Rizumu says today is the day his Crowds will start taking lives.

He sees Rui’s attitude as that of a spoiled child having his toy taken away. He wants Rui’s note, too, and refusing to give up his ideals or belief in eveyrone, including Rizumu, Rui hands it over, only to cough up blood and collapse when Rizumu repeatedly stabs it.

But JJ’s prophecy also mentioned “a great wind” saving “the flame of life.” That wind comes from Gelsadra, who after activating the moods of everyone in the city (who are mostly frightened), she sucks up all of those thousands mood icons, figures something out, then transforms into a figure of smoke, blasting the prophesied wind towards Tsubasa, who has successfully transformed and is racing to Rui’s aid with Hajime.

Rui is willing do sacrifice his life for his ideals, hoping his very public and televised death will be the catalyst that finally causes that world update he’s so intent on. And he could be right; the people are disgusted by the red Crowds’ actions. But even if the blue Crowds get their shit together, we’re still talking about a war, which won’t be bloodless. Not only that, Tsubasa isn’t going to let Rui die if she can help it. 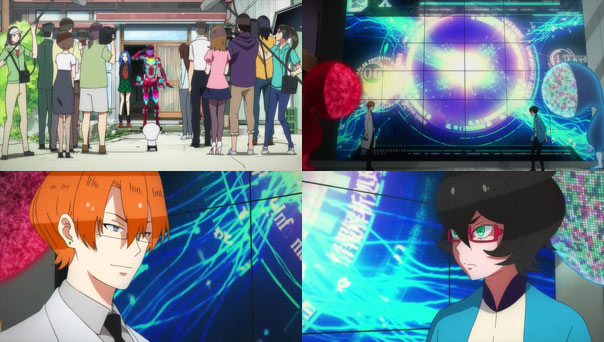 As Gelsadra is welcomed to Earth (touted by Paiman as a potential facilitator of world peace) and Misudachi initiated into the Gatchamen, X reports to Rui an increase in GALAX de-installations as a result of VAPE’s mischief. Their leader even shows up in Rui’s living room, using a red Crowds as a conduit.

He doesn’t see VAPE as making mischief, only demonstrating the folly of giving the “ape-like” masses such powerful technology. He believes society is sure to abuse it, as VAPE does, while Rui still believes in the inherent goodness of people. In a way, VAPE is a self-fulfilling prophecy.

There’s a ceremony at a Nagaoka mall to celebrate Gel and Tsubasa, but it’s crashed by VAPE, whose red Crowds are soon challenged by the blue Crowds of bystanders looking to help the outnumbered Gatchamen. In fact, it’s just Hajime at the mall; Tsubasa isn’t able to reach the emotional intensity necessary to transform, or is possibly too nervous.

When she does try to intervene without transforming, the Crowds she incapacitates almost falls on a granny. She’s still got a lot to learn about the intricacies of heroism, and with the red Crowds intent on showing that all Crowds are bad news, she’s been thrown into the proverbial frying pan to train.

It’s a defeat for Crowds and Rui, because he had no choice but to forcefully terminate the blue Crowds accounts to stop the chaos. 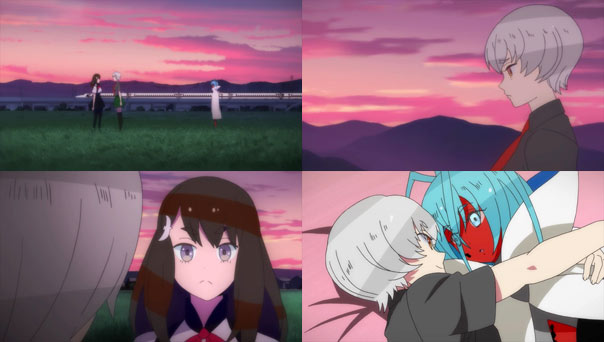 Tsubasa regrets indirectly injuring a bystander, but Hajime won’t scold or punish her, except by turning her head to face the gorgeous sunset. I like the dynamic of these two, with Hajime as the more mysterious/opaque personality and Tsubasa much more of an open book, devoid of vocal tics. It’s also clear that Gelsadra, the possible savior of the world based on her race’s track record upon arriving on worlds, must be protected both physically and mentally if she’s going to fulfill that promise.

Rui manages to get the name of the orange-haired VAPE leader—college student Suzuki Rizumu—so I imagine Rui is eager to be the one to confront him for their next meeting and philosophical debate. Meantime, despite her early hiccup, Tsubasa is headed back to the city with Hajime to hone her Gatchaman skills and join the ranks of the heroes.

Her gramps (a part of whom I’m sure is proud of her, though he’d never show it) warns her she can’t shoulder the weight of peace. I take that to mean it must be shouldered by all. While she may be strong, she mustn’t fear the help and support of others, strong or weak, nor bite off more than she can chew. 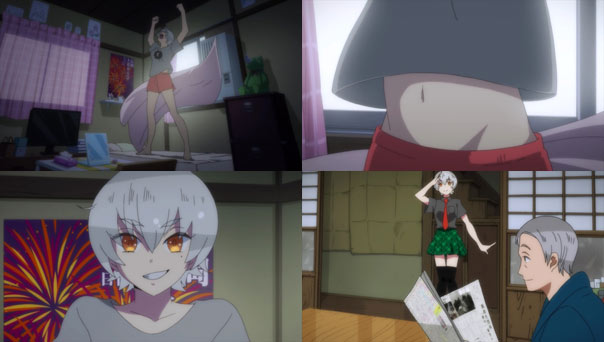 After a half-length, action-packed zeroth episode, GCI’s first full-length episode feels a lot more leisurely and filler-y. In fact, the true-feast-for-the-eyes OP and ED showed more action than the show in between. But that doesn’t mean it wasn’t without its notable events. First we meet the girl who will by episode’s end become the newest Gatchaman, the energetic firework crafter’s apprentice Misudachi Tsubasa (voiced by Ishihara Kaori of Rinne no Lagrange). 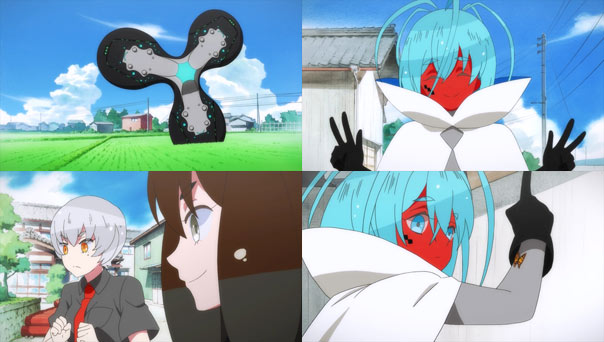 The Gatchamen have arrived in Tsubasa’s hometown of Nagaoka, Niigata to find their newest member when an alien spacecraft suddenly soft-lands in a rice field, bearing a new, red-skinned, blue-haired alien: Gelsadra (Hanazawa Kana). Gel has the rather interesting ability to place social media-icon like symbols above people’s heads showing their present state of mind.

As those states shift, the shape and color of the symbol shifts too (except, notably, for those Hajime and Tsubasa’s great-grandpa, which remain neutral gray). Did I mention Berg Katze now resides within Hajime’s bust, where I assume he can do no harm? Well…he does.

Meanwhile, Sugane is at college and extremely popular with the pastel-haired young ladies, Hibiki Jo now works for the PM’s office, and O.D. has his own variety show, in which his cameras just happen to descend on Tsubasa’s hometown to get info on both the alien and new Gatchaman. Oh, and the next national election will be open to everyone 16 or older, and people will be able to vote by smartphone. 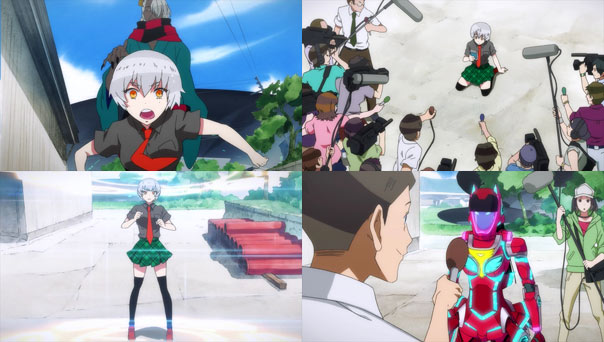 Tsubasa is somewhat frightened by her encounter with JJ, but once she gets her Gatchaman notebook and is able to transform as a result of her frustration with the gaggle of reporters, JJ’s prophecy turns out to have made sense after all: “A delicate ray of light (the UFO) falls upon a land illuminated by fireworks (Nagaoka) near the North Sea (Sea of Japan) where it will meet wings that are still blue (Tsubasa’s notebook is blue).

Despite the length of time spent in her town and her house, we didn’t learn that much about Tsubasa, except that she seems to have made quick friends with Hajime and Gel, doesn’t like big gray guys with claws or reporters, and should make a nice addition to the Gatchaman corps, just when Red Crowds attacks are on the rise.

Hajime reveals her face to Rui in the tunnel, and she’s caught on camera, outing her as a Gatchaman. Paiman is furious, but JJ has no response, so Paiman orders all Gatchaman to cease operations until further notice. When Hajime goes out in public she is hounded by the press. Monitoring Hajime, Rui sends GALAXters to serve as her bodyguards as General X guides her and Utsutsu safely to a restaurant where he’s waiting to meet with her. Sugane also shows up, and Rui asks them if they’d be willing to give up being Gatchamen; they decline.

Hajime didn’t take off her mask to get attention (she thought it important to talk to Rui face-to-face), but that’s what she gets, and handles it precisely as we expected: with no drama whatsoever. She just goes with it, and were it not for Sugane and later Rui and GALAX intervening, she’d have probably earnestly answered every question the press asked her without batting an eye, regardless of how many of Paiman’s rules she was breaking. This isn’t how an ordinary girl acts, but we all know that Hajime is special.

Sugane, Rui, and GALAX do intervene in her day, and when Rui sends out an APB for “knights” to protect the “princess”, a lovely cat-and-mouse ballet ensues, which not only gets Hajime and Utsutsu to Rui without any further trouble, but simultaneously acts as a little preview or taste of the updated world Rui is building towards. It’s some nifty double duty, and when the un-ordinary Hajime and un-ordinary Rui meet and talk once more, they both come away impressed. Sugane and Hajime like the idea of everyone in the world being heroes, but they’re not quite ready to stop being Gatchamen.