This is it; no more messing around: it’s time to start killing vampire nobles. Narumi and Shinoa’s squads plus Shinya are tasked with destroying Lucal Wesker, a foppish vamp who loves drinking blood on his favorite park bench that offers snipers a perfect target. But he sits out there in the open to make a point: he doesn’t fear livestock. He should.

Before they move out, however, Yuu stretches and makes a dig about their target’s name, which is just more ammo for the Narumi team to think they can’t count on these newbies. Both Shinoa and Yuu apologize, with Yuu solemnly stating he only remembers the names of those he wants to protect, then surprises his new comrades by stating all their names, gaining more of their trust.

Meanwhile, Yoichi is up in a radio tower, learning the sniping ropes with Shinya. But Lucal senses their first shot before they fire it, and sacrifices his right-hand man to block it. He blocks Yuu’s strike with one hand and stops Shinoa’s scythe with his other. At this point Lucal is more displeased with having spilled his glass of AAA four-year-old female blood; it would have been cooler if he’d continue holding it and handle the humans with one hand, without spilling. Alas.

If nothing else, this fight shows that Guren was right to increase manpower per noble, as Lucal is perfectly able to withstand even a multi-pronged attack with the element of surprise against him. But getting away from one onslaught means sacrificing his own left forearm, which Shiho uses as bait while provoking him to enter their formation, which he does.

Lucal finally got fed up with being messed with by all this livestock, and when he figures his time is up, he refuses to give them the pleasure of having finished him, doing the job himself. I really thought the redhead Yayoi Endo was a goner, but Lucal merely shoved her aside. Their mission is a success, and the Narumi team learns that the Shinoa team, and even Yuu, are people they can put their trust in. It was an enlightening, complete team effort. 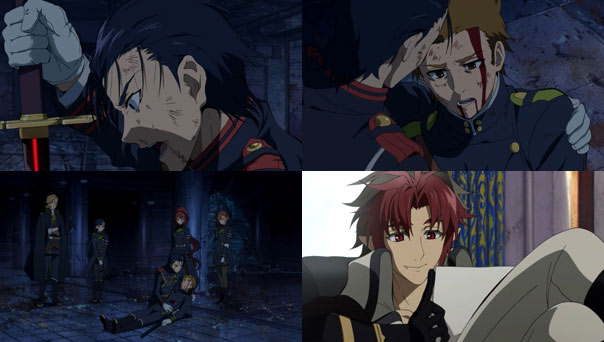 But these two teams are clearly two of the best; after all, three teams each were sent after other nobles. We watched the best take care of business, but the not-best didn’t fare so well. Their hard-won victory begs the question of how the other teams are doing. We don’t see them, but instead check in on Guren as he barely finishes a noble on his own; his elite team of five is working alone.

A dying survivor then arrives to report to Guren that the city hall team’s mission was a fiasco: 26 killed, 19 taken hostage. Guren knows it’s a trap. His comrades know its a trap. But they have to go anyway. His team will join with Narumi and Shinoa’s squad, and take out the target: 13th Progenitor Crowley Eusford, who I recognize from last season as the first noble Yuu & Co. encountered. I bet he’ll be a bit tougher to bring down than Lucal.