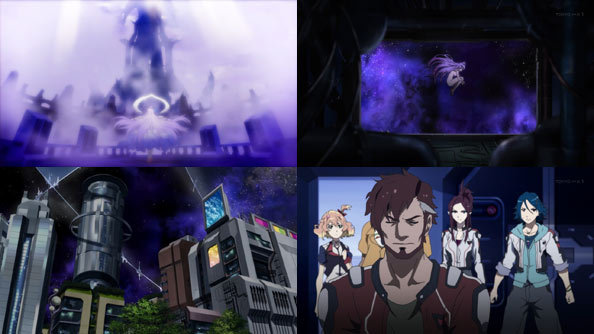 When Walkure, Delta, and Chaos retreated from Ragna, they did so with a ragtag fleet led by the reliable Macross Elysion, but lagging behind it is the Island Ship, a 30-year-old relic that didn’t get to properly warmed up and is now experiencing cascade power failure.

On top of air, food, and weapon shortages there are thousands of refugees who want to get back home ASAP, several of which wonder why they left in the first place.

Makina and Reina formulate a plan to shore up the Island Ship’s systems, but they have to accelerate their plans when an energy blow-out causes a hull breach right near where Hayate, Mirage and Freyja are hanging out.

For a second, I thought things would go from bad to worse, but Freyja has always been pretty lucky, and so is not sucked out into space when she’s separated from the other two by an emergency bulkhead. 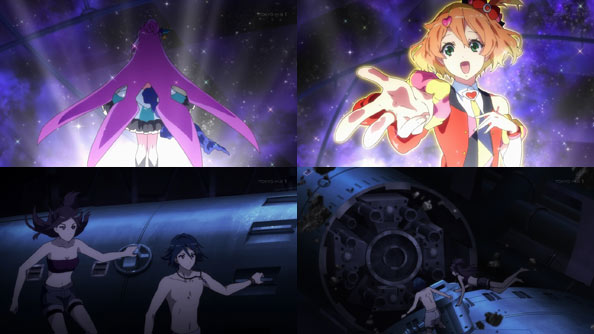 While the plan to restore the ship unfolds, Walkure takes an impromptu stage to keep the refugees calm, hopeful, and entertained. Things get a little silly when Hayate and Mirage inexplicably strip down to their skivvies, ostensibly to get a better grip on a crucial power conduit. 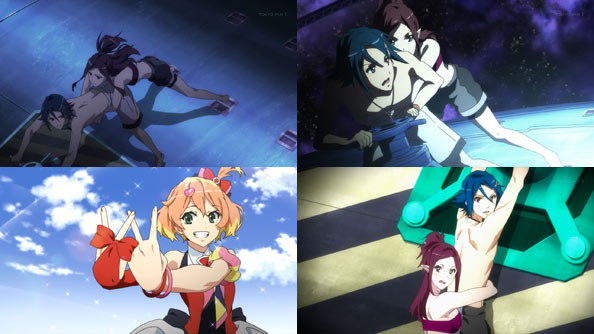 Things get a little sillier (and worrying for Freyja, who can kinda hear what’s going on in fits and spurts but comes to the wrong conclusion) when Mirage has to embrace Hayate tightly like a lover in order to turn the dang valve over, and when the power, gravity, and lights come back on, they’re literally left hanging from that valve, looking to everyone watching like they’d just been up to something untoward.

With Elysion successfully docked and the Island Ship working more or less normally again, our heroes’ have cleared their first post-defeat hurdle: stay alive. Chaos also gains new sponsors (the old ones being occupied) in mining corporations who hire them to take the Globular Cluster back.

They’re still way outgunned, but at least they don’t have to worry about going broke, and they’ve staved off a more serious crisis with the refugees. Meanwhile, a power struggles seems to be afoot, with Keith in an apparent coma, Heinz poised to succeed his dead father, and Roid believing he possesses Gramia’s “will.”