Tokyo is one of the largest, busiest, most lively cities in the world, but there’s an oasis of tranquility right near its heart, and I’m not talking about the mostly off-limits Imperial Palace Grounds. I speak of Shinjuku Gyoen National Garden, once a private estate in the Edo period, and also the primary setting of Shinkai Makoto’s 2013 film The Garden of Words.

I’ll admit my review comes very late—so late, in fact, in the time between the release of the film and the day I’m writing a review of it, its co-lead Akizuki Takao would be 19 (not 15), making a potential romantic relationship with Yukino Yukari, who would be 31 (not 27) more socially acceptable. But here it is!

Akizuki loves rainy mornings. He loves them so much, he’ll skip school to visit Shinjuku Gyoen and enjoy it. One day, while preparing to sit at a sheltered bench overlooking the gardens, he encounters Yukino: a beautiful, mysterious woman in work clothes drinking beer and eating chocolate alone.

While 15, Akizuki is wiser and more mature than his years. He finds high school a major drag, and mostly stresses about a practical way to support himself doing what he loves: designing and making shoes. But when he visits the park and shares the bench with Yukino, he feels like he’s in a more mature environment, where he can sketch shoes or just shoot the breeze with her.

Their encounters also become important to Yukino, who we learn is preparing to quit her job, and is clearly in the park to escape said job and the stress/pain it causes, which was apparently bad enough that she lost her sense of taste for a time, only being able to enjoy beer and chocolate.

Not only is the hard-working Akizuki a shoemaker-in-the-making, he’s also a part-timer at a restaurant and cooks a lot at home, making him a better cook than Yukino. Thanks to the meals he shares, Yukino starts to enjoy eating again. 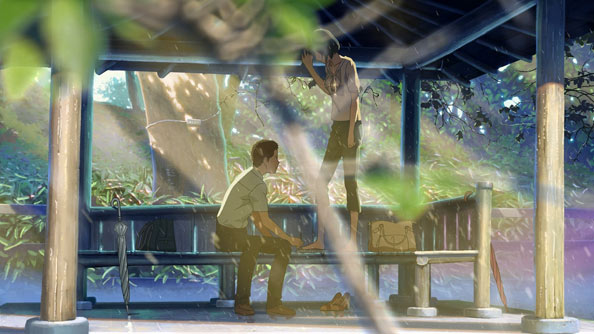 Wanting to help him with a woman’s shoe design, Yukino removes her shoe and lets Akizuki hold and measure her bare foot, in an intimate, even sensual scene that also happens to be practical.

That intimacy is heightened by the made-for-a-couple sheltered-bench and the gorgeous environs. But while she’ll give him her foot, Yukino never talks about herself, her life, or her struggles, no matter how much Akizuki talks about his.

Unfortunately Akizuki has to find that out when he spots Yukino, or rather Yukino-sensei, at his school—she’s a teacher there. He had no idea of that, or that she’d been taking days off because the boyfriend of a student fell for her which led to unsavory rumors about her being promiscuous and verbal and emotional abuse from her upperclassmen students.

Yukino is pained to hear all this treatment, and that she’s quitting because of it, but likely also hurt that Yukino never told him anything, or that she could even possibly have known he was a student at the school but kept him in the dark.

Whatever the case, he decides the injustice done to Yukino should have a response from someone who has come to care about her, so he confronts the upperclassmen, starts a fight, and loses. After school, they meet at the gardens, but he doesn’t tell her he fought to protect her honor. 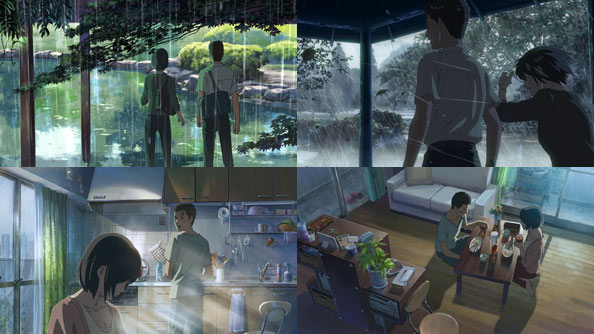 After giving her the correct answer to her tanka poem from their first encounter, Akizuki and Yukino find themselves caught in a torrential downpour, and even when they get back under cover, they’re both soaked.

They apparently take it as a good omen, and go to Yukino’s apartment, where they change into dry clothes, and while he’s waiting for his uniform to dry, Akizuki makes Yukino a delicious meal, both noting they’re having some of the happiest moments of their lives, right there and then. 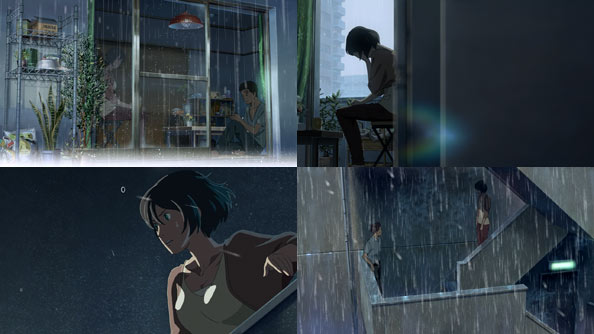 Like the sunlight, it doesn’t last, and as the sky darkens with more rainclouds, a sudden confession of love from Akizuki is countered by Yukino correcting him: “Yukino-sensei”. Akizuki hears her loud and clear: he’s a kid; she’s not, and that’s the end of it. So he changes into his still-wet clothes and storms off, just as the storm outside picks up.

Yukino doesn’t want to leave things there, so after stewing, suddenly alone in her apartment, with even Akizuki’s coffee still steaming, she does the romantic movie thing where one comes to their senses, rushes out of the house, and chases after the one they love.

When she finds him paused on a balcony, he takes back his confession and starts spewing vitriol about her intentions, but later in the rant it becomes more about why she couldn’t simply tell him, a stupid little kid, to piss off and stop bothering her. Why she never said anything to him while sharing that bench. 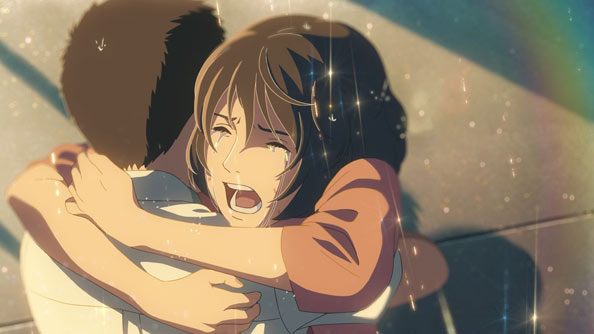 Yukino’s response, also classic romantic movie, is to run into his arms and sob just as the sun peeks back out from between the clouds, finally telling him why she went to that bench again and again, and how being with him helped her “learn how to walk on her own” again; how he essentially saved her.

Yukino still moves out of that apartment, back to her hometown, where she’s still a teacher. But she later writes to Akizuki, and as he reads the letter in the park where they met and spent so much time and where they taught each other how to walk, he seriously considers going to her hometown someday to see her.

The Garden of Words is gorgeous, as is expected of a Shinkai film, with its near-photorealistic exteriors, lived-in interiors, and fantastic lighting and details all around. At just 46 minutes, it runs brisk but never feels rushed, but rather feels just as long as it should be.

It also felt like a particularly intimate/personal film, though not for the reason you’d expect: I once sat at the exact same bench in Shinjuku Gyoen they sat at, unhurriedly sketching the gardens and writing about my day (though as you can see, the real one has an ashtray.) If you’re ever there I highly recommend it, just as I recommend this lush and moving little film.