In what has to be one of the strangest conceits of the show thus far, Ninth Daughter Kururi demonstrates her powers of invention by building a kind of “auto-doctor” suit for Takuma. It’s a very thin and random excuse for him to examine most of the sisters’ bodies in various ways.

Aside from a few bizarre moments, it’s not that amusing. It also repeats a number of character beats without adding anything new, and it’s all very lazily-animated. 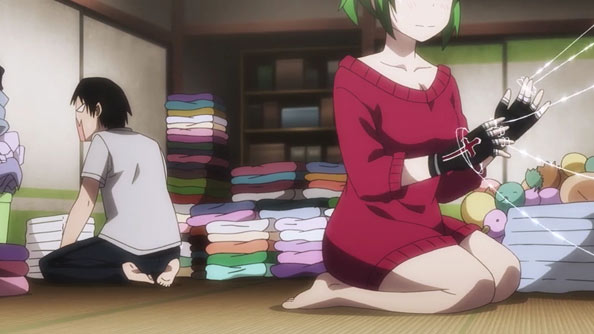 The second half is focused on Third Daughter Misa, who has to demonstrate to Itsuya what a Midgard date is like. This takes the form of her being alone in a room with Takuma as he folds laundry and she sews a giant stuffed doll for Natsuki in a loose-fitting sweater, leading to various compromising ecchi situations.

Again, nothing much of note here. Things happen to Takuma, he gets embarrassed or nervous or afraid, and the girls berate, praise and titillate him in more or less equal measure. It all happens within the confines of Takuma’s dark, drab house. It was as if, after the battles of last week, the show decided to take a nap under the kotatsu.

3GL has proven time and again it doesn’t have to stick to one story per episode to excel, and this is one of those split episodes that really resonated with me. The Lion King Tournament took up so much of the show’s—and Rei’s—attention and energy that the fact it’s over now feels like a great weight has been lifted, and now life goes on, which we get to witness a slice of.

Rei accompanies Shimada to his hometown of Yanagata, and as he’s known as a “rainbringer”, the Human Shogi can’t be performed outdoors. It is, however, still performed, on a stage in an auditorium, and I have to say I really dug the tradition and pageantry involved in such a production. The town’s pride and devotion to shogi is evident in every one of the human shogi pawns’ faces.

As for Shimada, he may have brought gray clouds and rain, but indoors, the various Yanagata shogi festivities seem to recharge him, to the point that by the time he’s leaving, he’s ready to start his climb to masterdom all over again, realizing he’s been rushing and failing to enjoy the ride.

At the same time, hearing that Shimada came up with a community shogi program that benefits otherwise isolated elderly folks adds another dimension to Shimada, who has now gotten more development than any other shogi player besides Rei.

The next segment has nothing to do with Shimada, but is focused on the Kawamotos as Gramps mines his granddaughters for inspiration. He’s trying to craft another “signature sweet” to supplement the already popular “baked crescents”.

He trusts and respects the sisters’ opinions, at least to a point: when they start getting too non-traditional, he bristles. That being said, he also loves Momo’s suggestion of using gum, though that’s probably just ’cause he loves Momo and would call her a genius even if she suggested something truly heretical, like Hershey’s Kisses.

Later, Akari and Hina decide to splurge at a sweet shop, but end up going overboard with extras, sending the check skyrocketing to a sum that could have been used to feed the family for a week. As they say, those places are at trap, and they’ll clean you out and leave you fat, but that doesn’t mean the treats they push aren’t great anyway, or that it’s wrong to treat oneself once in a while.

Later, Hina is the one with the eureka moment, developing a versatile and cute daifuku snowman confection. Clearly the apple didn’t fall far from the tree, as Gramps admits the sisters’ mom was the one who came up with the Baked Crescents. Family, for Gramps, is not just obligation, but a font of inspiration. And the shop stays in business thanks in part to their ideas and energy.

In an exceedingly adorable closing scene, Hina calls Rei, then hears his phone ringing at the door; he happened to be arriving by surprise. It’s nice to see the two so in sync. There’s also a nice positive “karma” in Rei showing up with excess Yanagata treats from Shimada, as if the universe is re-filling the coffers Akari and Hina’s parfait run emptied. But more than anything, it’s nice to see Rei reunited with the Kawamotos.