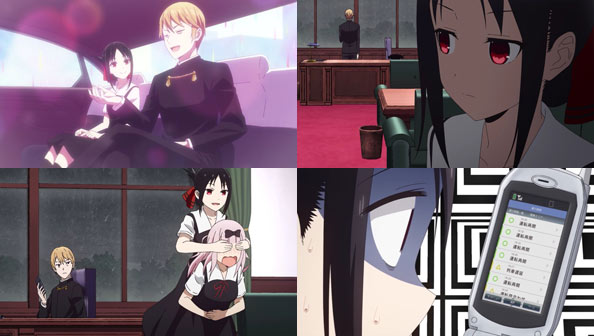 A typhoon that shuts down the trains brings good fortune for Kaguya, if only she’d simply use it and not make things more complicated. However, asking Miyuki if he wants a ride, thus initiating a “car date”, would be breaking her code, so she waits for him to ask for a ride instead.

Her hesitation ends up opening other opportunities for Miyuki. First, Chika offers to share her taxi, and Kaguya has to use her fear of lightning stealing her belly button to usher her out of the StuCo office. But then the trains start running when the typhoon dies down, further threatening the car date. 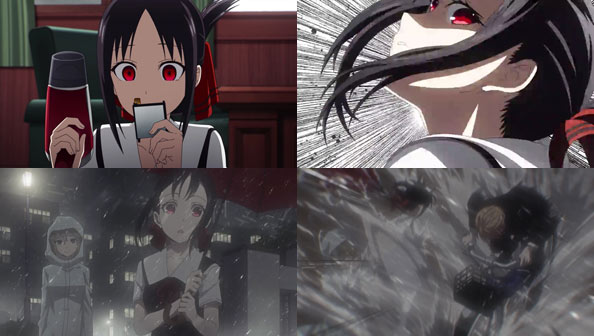 Kaguya resorts to sabotaging Miyuki’s phone battery, but he still doesn’t ask for a ride, and when her phone rings, she panics and runs outside where Hayasaka and the car are waiting.

Still, Kaguya waits outside, in the lashing wind rain, for Miyuki to come outside, get down on his knees, and beg for a ride. Instead, he races out of the school on his bike, resigned to get soaked but intent on getting to work as quickly as possible. He utterly drenches Kaguya in his wake.

The next day, Kaguya has a terrible fever and is consigned to bed. Someone from the StuCo has to visit her to drop off printouts, and Miyuki leaves himself open until Chika brings up the fact Kaguya talks and acts like a baby when she’s sick. Suddenly, Miyuki is motivated to be the one.

But Chika decides they’ll determine who goes with a game of Concentration, and she cheats numerous times, so intent she is on seeing Kaguya in her cutest state. All the time, I was wondering why Miyuki didn’t simply use his authority as president to decree that he was going.

Once he hears from Yuu that Kaguya was waiting outside for someone and starts to remember drenching someone, Miyuki does what he needs to win the card game, while shaming Chika into oblivion; Chika leaves the office the way Yuu usually does: pondering death.

Miyuki arrives to find Hayasaka disguised as a maid, and she escorts him to Kaguya’s room where she’s ransacking the place looking for fireworks. Chika was right: Kaguya isn’t just a baby, but completely off when she’s sick. Hayasaka explains that her ego is being suppressed by the fever, leaving only the id.

She then leaves Miyuki along with Kaguya, making sure to drive into his head the fact that they won’t be disturbed, the walls are soundproof, and Kaguya won’t remember anything he says or does while in her feverish state…BUT tells him not to do anything appropriate, wink-wink. 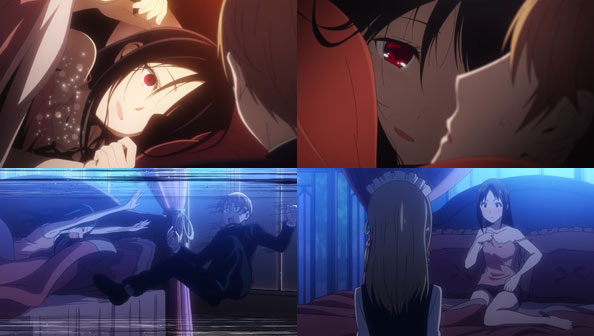 Miyuki is on his best behavior, but the fever-drunk Kaguya is the one who ends up doing something inappropriate. She opens her covers, pulls Miyuki into the bed, and won’t hear of him leaving her side. Miyuki is exhausted anyway, and so falls asleep.

Kaguya wakes up before him, the fever passed and of sound mind, and completely freaks out when she finds Miyuki beside her. She rouses him from sleep, shoves him out of the bed and her room, and asks a coy Hayasaka “how far she got” with Miyuki while she was feverish.

Thus ends the least romantic first sleepover either Kaguya or Miyuki could have asked for; one in which one of them wasn’t really all there, and the other was rightly very careful not to take advantage. I liked how this entire episode told one continuous story, though I doubt there will be lasting repercussions from the “sleepover” due to the unique circumstances involved.

Fresh off the amicable resolution of the Koga Tomoe arc, we are presented with not one but two new mysteries, both involving characters we’ve dealt with before. Just as Sakuta’s earlier, seemingly random encounter with Koga paid off nicely (butt-kicking leading to quantum entanglement), his past established crush on “Makinohara Shouko” makes the sudden appearance of someone with the same name who looks just like her, only two years or so younger, that much  more intriguing.

At the same time, Futaba Rio is elevated from Sakuta’s sounding board and scientific consultant to an actual participant in Adolescence Syndrome weirdness. Sporting a fresh look with ponytail and contacts, Futaba doesn’t have any answers for Sakuta about why some younger copy of his crush suddenly appeared. If it’s not causing any harm, just don’t worry about it for now.

And the episode doesn’t; not really. Shouko is mostly tabled as the episode veers toward the slow-burn relationship of Sakuta and Mai, who is done with a job early and surprises him by showing up at the restaurant where he works, and even implies he’ll let him make out with her later.

After his shift, the two spot Futaba entering a Net Cafe and follow her. Using Mai’s phone, Sakuta calls her (presumably so the sound of her phone will indicate where in the cafe she is) but as he’s talking to Futaba on the phone, he and Mai spot a second Futaba. Yup, she’s got herself a doppelganger!

This Futaba, with glasses and no pony tail, finds herself temporarily homeless, since the other Futaba is already living in her house. Sakuta invites her to stay at his place, something Mai only approves if she can spend the night there as well. 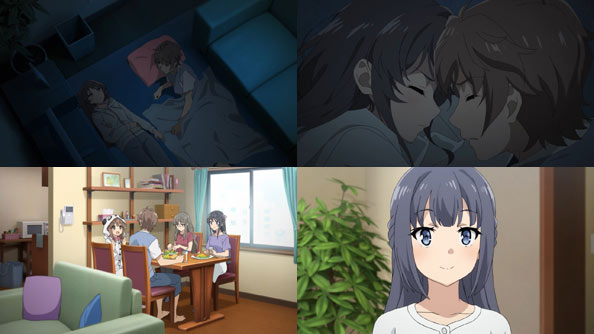 This Futaba is extremely coy about what could have brought on Adolescence Syndrome to the point she’d split in two. Sakuta puts her up in his room with Mai, but Mai soon comes out to the living room where he’s sleeping, giving him the hints and nudges he needs to indicate she’s open to him making a move whenever, not just a special occasion for an apology. After all, he’s her boyfriend. Unfortunately, their kiss attempt fails when they bump heads. These guys are just to frikkin’ cute together.

The next day, after some domestic bliss with his full house, Sakuta has Mai watch one Futaba while he goes to school to track down the other. Shouko shows up, but nothing further on her situation is explored; it’s just an opportunity to confirm to Futaba that there is a new Makinohara Shouko in Sakuta’s life.

At school, while on the way to science club (which consists only of her) Futaba stops to watch Kunimi play basketball, which is where Sakuta finds her. After talking with her for a bit, it’s obvious he’s not dealing with “real and fake” Futabas; they are both Futaba, through and through.

That’s not to say the two aren’t very different; not just in appearance (though that’s a start): the ponytailed, contact-wearing Futaba just seems far more assertive, confident, and active, whereas the Futaba back at his place seems, well, almost the opposite of those qualities.

When Kunimi’s girlfriend confronts Sakuta with a social media feed of Futaba taking risque pictures of herself, my theory solidified: the two Futabas embody her id and ego (or super-ego). She is out of balance, and her unrequited feelings for Kunimi seem to be the cause. The question is, how is Sakuta going to help her restore that balance and become one again…and where does Shouko fit into all this?

P.S. A powerful little moment is when Mai’s cell phone goes off and Kaede suddenly looks like she’s about to be shot. Now we know why Sakuta doesn’t own one!

P.P.S. Futaba fell for Kunimi when he bought her a Choco-Cornet; Id-Futaba makes that her social media handle for her photo feed.