After waiting in line with the autograph-seeking Teddy Demons, Harpy invites Sya to a pajama party, somewhat disingenuously promising it will result in more cheerful sleep. Sya can’t pass that up, but she needs more information on what a pajama party is…so she hops into the Demon King’s bed to “practice” such a party.

Jumping in bed to practice is an extremely misinterpret-able scenario for, say, Cleric, who also overhears Sya talking about demons and humans falling in love. As a result, his devotion to protecting Sya’s chastity overrides his loyalty to his lord, and he attacks Twilight with lightning. The battle eventually gets too loud for Sya to sleep, but upon returning to her room she gets the cheerful sleep she sought…precluding the need to attend the real party. 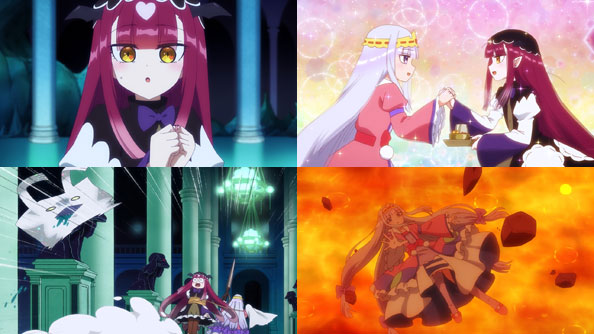 Poor Harpy…she just wants to be friends with the princess! The succubus Cubey, on the other hand, has an ulterior motive: she wants to become more popular (popularity literally being the life blood of Succubi). When she learns she and Sya closely resemble one another, she seeks Sya’s tutelage on how to be more popular.

Unfortunately for Cubey and like most things regarding Sya, she isn’t popular on purpose, it just happens. Also, Sya misunderstands Cubey’s intentions from the start, believing her to be a potential body double in need of elite training. This results in Sya tying Cubey up and dragging her around the castle causing havoc, from murdering ghost shrouds to plucking Quillodillo quills to…well, actually, brushing Teddy Demons is delightful!

By the time Sya has Cubey on a cliff overlooking the lava lake impressing upon her the importance of staring death in the eye, Cubey’s struggling and yelling causes the cliff to collapse, and Sya falls into the lava and dies…again. Cubey fails to become more popular or learn anything useful from Sya, but Sya’s quest to get better “rest” succeeds. 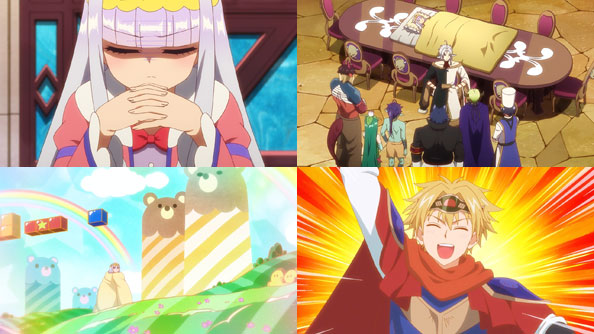 Finally, Twilight and the Big 10 are having another important meeting when Sya again busts in like she owns the place, parks herself at the table, and tents her fingers like a petite, adorable Gendou Ikari. Whatever they’re discussing in this meeting is irrelevant: she has a task for them: to determine why the quality of her sleep has been lacking of late.

Twilight brings in Hypnos, noted sleep expert, to determine the cause. He arranges so the group can watch Sya’s dreams in real time, and the culprit to her crap sleep is revealed: “D-Whatsit”, AKA Dawner, AKA Akatsuki, the hero. Out of a desire to hang out, he is relentlessly pursuing Sya in her dreams. 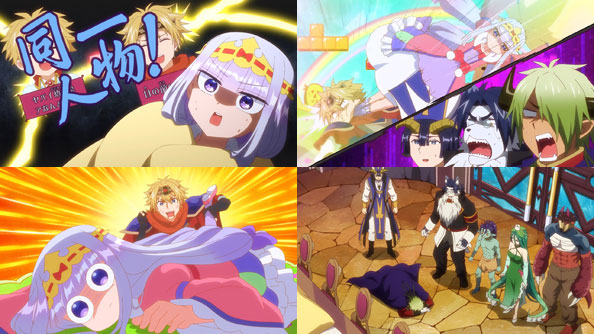 While Cleric has known for a while now that Sya’s fiancée D-Whatsit and Dawner are the same person, both Sya and the rest of the Demons only come to this realization while her dreams unfold. Regardless of who he is, Sya doesn’t want anything to do with him, and shifts between attacking him and running from him. But like a chipper T-1000, he Just. Keeps. Coming.

Eventually Hypnos determines that Dawner is in Sya’s dream thanks to a letter bearing Sya’s signature…which Twilight learns he himself let fall out of his cape and into Dawner’s belt when he was redirecting the Hero’s party away from the still-under construction area of the Demon Castle grounds.

Once Twilight retrieves that slip of paper (not depicted on camera), Sya’s sleeping demeanor instantly improves dramatically to her usual tranquil “Syaaaaaa”-ing. And so, due to her acute aversion to the Hero, Sya further delayed her own rescue. But as we’ve seen, she’s not in any particular hurry to ever be rescued. She’s got the place on lock!

While there was no danger of Syalis’ antics growing stale at the Demon Castle, there’s nothing like a change of venue to freshen things up. That change occurs when Twilight’s rival Hades kidnaps Syalis in her sleep and deposits her in the far more rundown (but quieter!) Former Demon Castle.

The overarching joke this week is that Hades acts precisely like Twilight and his underlings when they first captured Syalis. Now they know better and harbor a healthy fear and respect for the pint-sized princess, while almost pitying Hades for not knowing what’s coming down the pike.

Predictably, Syalis doesn’t panic or cower before Hades or his adorable henchmen triplets Ker, Ber, and Os. Her first instinct is to simply sleep, in lieu of anything better to do. Then she puts her head on the appallingly cheap pillow and gets a nasty case of deja vu from her first night in Twilight’s castle.

Armed with a new quest to improve her pillow as the first step in a process, Syalis immediately returns to her usual relentlessly resourceful and determined self. When Ker, Ber, and Os try to intimidate them, she casually tosses an explosive pompom at the cell gate and sends them fleeing in terror.

Syalis’ search for fluffy bedding materials takes her into direct contact with Hades, but since he’s busy on the videophone gloating to Twilight (and laughing an exaggerated laugh like Rintarou Okabe) he doesn’t notice her literally ripping his clothes off for repurposing.

She gets an assist from her “friends” at the Demon Castle when they make such a ruckus on the phone, Hades is distracted. They even get him to look and levitate upwards so she can snag his fur boa, and when she does they cheer like Houston celebrating a successful rocket launch!

The pillow, however, is merely the first step. Syalis’ second quest involves improvement of her bedding in general. She soon finds that this Former Demon Castle has a lot more traps, but thankfully none of the needles, flying axes or fireballs end up killing her, and she meets a kindred spirit in Hypnos, the “personification of drowsiness”. 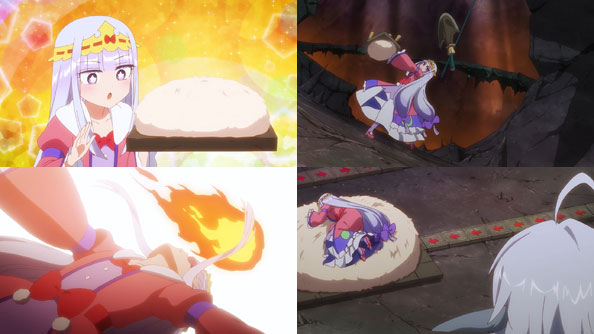 Syalis is immediately impressed by Hypnos’ dedication to sleep and begins calling him “Master” and asking him to teach her. When he shows her that the undersides of the tiles of an electrified walkway are fluffy fur, she jumps several steps ahead, killing the power source and gathering all of the furry tiles.

This sets off a number of traps, but Syalis must have been trained in martial arts and self-defense, because she’s able to dodge all of them, impressing Hypnos enormously. Her final bed contraption consists of a large mobile fur mattress that moves along a track, avoiding fireballs as she sleeps.

But as she’s starting a third quest for another comfortable night’s sleep, Twilight and some members of his Big Ten Council prepare a rescue mission to retrieve their captive. Lower-ranking people in the castle note how quiet and boring it is without the princess. They all want her back! 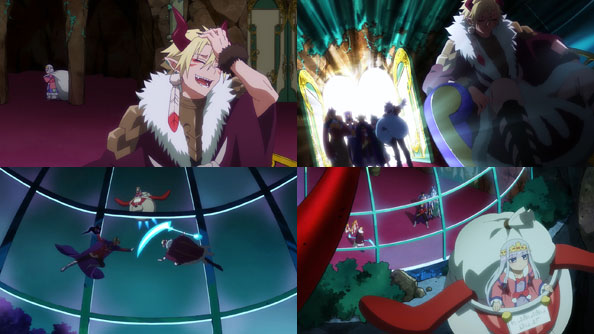 Hades remains in blissful ignorance, believing it laughable that the princess could leave her cell, let alone do all of the stuff she’s done. Yet she’s in his personal fur stash gathering materials, and just as he’s discussing all of the status-boosting weapons Ker/Ber/Os can use to repel Twilight and his compatriots, Syalis is destroying those very weapons in order to make a comfy neck pillow.

When Twilight & Co. finally confront Hades, the two Demon Lords seem poised for an epic one-on-one battle, which is interrupted by the sight of Syalis flying off in a flying contraption also meant for Ker/Ber/Os. Twilight & Co. peace out, taking a rain check on that duel, and chase after Syalis, who reunites with a Demon Teddy and sleeps soundly on the bag of stolen furs as the contraption flies her back to the Demon Castle—a place she’s come to think of as home.